Gigi Hadid went on another chic stroll with baby Khai in tow.

The supermodel and new mom was photographed in New York City this week wearing a casual coordinated knit set while getting her steps in with her daughter and a friend. For the outing, Hadid wore a long-sleeved, collared gray knit cardigan with a pair of matching wide-leg pants. Hadid paired the look with square-toe boots from Vagabond Shoemakers, a chunky gold chain-link choker necklace, and a matching protective face mask from LAPCOS. She kept her newly dyed red hair pulled back into a ponytail. 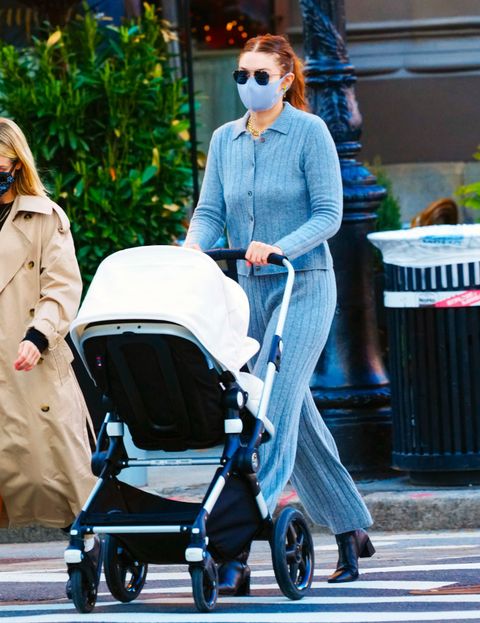 The supermodel has been showing off her experimental new-mom style in recent weeks, sporting a utilitarian jumpsuit, an oversized blazer, and a color-blocked trench coat while out walking with her baby daughter.

Hadid’s partner and Khai’s father, musician Zayn Malik, opened up during a recent interview on iHeartRadio’s Valentine in the Morning about how he and Hadid are adjusting to their roles as new parents.

“Honestly, it’s amazing,” said Malik of fatherhood. “A lot of people that I was speaking to, obviously before she was born and stuff, were like, ‘It’s a big adjustment, and it’s going to be a massive change and stuff.’ But honestly, she’s an amazing baby. It’s been really easy for me and Gigi to kind of just ease into it, I guess. She kind of made it easy for us. She sleeps really well, she loves her milk.”

He added, “It’s just feeding and changing diapers at the minute. It’s wicked. I’m enjoying it, for sure.”