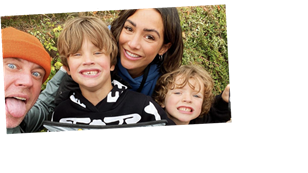 Frankie Bridge has opened up about suffering from mum guilt after revealing her sons are moving schools.

Taking to her Instagram Stories, Frankie shared that she felt guilty for missing seven year old Parker and five year old Carter’s last day at their old school due to work.

The 32 year old, who recently explained why she doesn't discuss being a stepmum, told the camera: “Morning, so it’s the last day of school for most of the kids before Easter.

"What the hell are we going to do with them for the next three weeks? I don’t know. For me it’s a bit of a bittersweet day today because the boys are moving schools.

“When they go back in April they’ll be in a different school. And they’ve been at this school that they’re at since Parker was in nursery so we’ve been there for a really long time, and I’m in work today so I can’t pick them up.”

Adding that she knows her two boys won’t “care”, the Loose Women panellist said she still couldn’t help but feel the “mum guilt”.

Frankie, who recently opened up about battling an eating disorder while in The Saturdays, continued: “Doesn’t really make a difference does it? I know that and I know that they don’t care.

“Couldn’t care less if I’ there or not but I’m convinced that I should be there and I feel really bad about it. So yeah, good old mum guilt”.

Frankie’s next post saw the star with with her make-up artist and stylist as she got to work.

It’s been a tough few days for Frankie, who shares Parker and Carter with her husband Wayne Bridge, as earlier in the week the former Saturdays singer revealed they had to rush Parker to hospital after he was left struggling to breathe due to croup.

Admitting the ordeal was “really scary”, Frankie shared a short clip of Parker and Carter drawing and revealed: “Both boys home today. Parker had his usual croup attack last night. So we were in a&e till the early hours. [sic]

"Look at the state of me. I've got a nerve coming on like this haven't I?! Not even washed today!

"Yeah just one of those rubbish nights. We knew Parks was gonna get croup…. we just knew it.

"The boys have had runny noses. To the point where we had parks in our bed. Cos we knew it was gonna come. And it did! [sic]

So we needed up rushing him to a&e when he still couldn't breathe after a while. And nearly ended up stating over. [sic]

"But because we are croup pros. They let us bring him home. Tonight will be the test. You know cos it always gets worse at night and sometimes kick off again. But I'm hoping it doesn't. [sic]

"That's only happened with him once. It's just really scary. For him and for us trying to keep him calm. And keep us calm!"