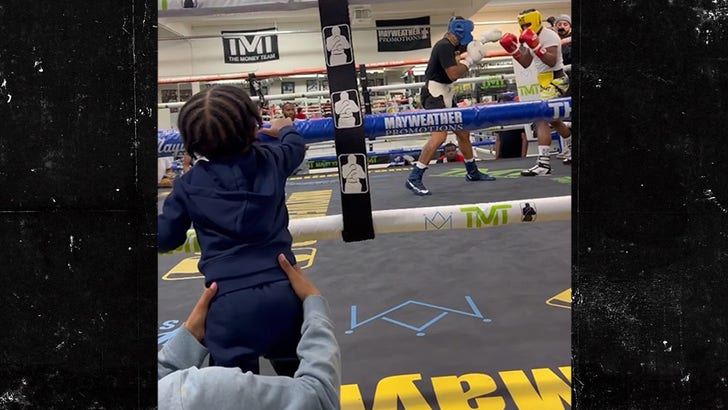 Floyd Mayweather may be retired from boxing professionally, but he isn’t done making money … in fact, “Money” says he plans to continue making bank into his 90s just like Warren Buffet.

The 45-year-old undefeated boxer posted a sweet video of his young grandson watching “grandpa” train. Floyd wrote the caption of his post to the young boy, and offered him some wise words.

“Grandson, I’m very thankful for your great Granddad teaching me the sweet science of boxing, to hit and not get hit. I believe in working smarter, not harder. I retired from the sport undefeated with all my accolades and on my own terms,” Floyd wrote.

“Even in retirement, I’m still able to milk the game of boxing, continuing to make 8 figures or more. I will continue to do exhibition bouts making tons of money and people from all around the world will continue to pay because my hustle is just different.”

FYI, Floyd’s referring to his dad, Floyd Mayweather Sr., when he says “great Granddad”… a former fighter turned trainer who coached Floyd as he became the world’s best and most popular boxer.

“I will continue to do exhibition bouts making tons of money and people from all around the world will continue to pay because my hustle is just different. If Elon Musk, Bill Gates, Jeff Bezos, Warren Buffett, and the Waltons continue making money in their 50’s, 60’s, 70’s, 80’s, and 90’s, then I’m not retiring from making money and I’m younger than all of them.”

Of course, Elon, Bill, Jeff, and Warren are 5 of the richest people in the world … and are all at least 50 years old.

Here’s a breakdown of age and money (according to Forbes).

Bezos, 58, is the third wealthiest person on Earth … amassing a fortune worth nearly $148 billion.

Buffett, 91, is the oldest person Floyd named … but the 6th wealthiest person hasn’t slowed down. The “Wizard of Omaha” is still the Chairman and CEO of his massive holding company, Berkshire Hathaway. Warren is worth $117 billion.

Now, Floyd’s wealthy (he once made over $300 million for 30 minutes of work — see Conor McGregor fight), but not that wealthy, yet.

Then again, Mayweather’s not even half Warren’s age … so, he’s got time! 🤑