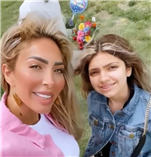 Fans are always quick to speak their minds about Farrah Abraham.

In turn, Farrah has never been known to hold back, even when her thoughts are chaotic and nonsensical.

Over the weekend, she gathered with family to honor Sophia’s late dad and to celebrate Mother’s Day.

In Farrah’s rant, however, she did her usual complaining … followed by some outlandish political claims.

Under the guise of “slam poetry,” Farrah posted a lengthy video to Instagram, one that we have included here.

As she would say many times during her … poem … Farrah then said: “motherhood.”

“I once was a child,” Farrah’s narrative recalls.

“And only knew motherhood through my grandma and mother,” she reflects.

“Now,” Farrah notes, “I fly into the Midwest with my own daughter.”

“His birthday, a day before Mother’s Day,” she explains.

Derek Underwood was born on May 8.

“He not only was a gift to a mother at one time,” Farrah describes awkwardly.

“But he is a reminder he gave me one of the biggest gifts of my lifetime,” she praised.

Farrah then spelled it out: “motherhood.”

“With loving memory of his birthday,” Farrah expresses.

“A reminder of where I became a mother in the Midwest,” she notes.

“It brings me back and close to my mother, my grandmother, my sister each year,” Farrah says.

“Where we come together for Mother’s Day,” she says.

“As a mother who has had to fight to keep her child,” she goes on.

“To protect her child,” Farrah lists, “to make her child happy.”

“To put child development number one,” she claims.

“To love her child,” she continues. “To correct and guide her child.”

“Someone just help me days,” she says.

So far, despite a lack of general coherence (which is fine), Farrah is almost sounding relatable.

“If mothers were to become products of our society, environment,” Farrah then accuses.

She proclaims: “They are the reason we call some ‘the worst moms.'”

“I’ve had epiphanies in my 20s,” Farrah continues.

“How much I love them for trying so hard to rise above the environment, pressures, and society’s grooming they had as mothers at that time,” she lists.

“The world is neglecting our mothers,” Farrah asserts. “Motherhood.”

And then for the transparent, almost obligatory Farrah-rant portion.

“While mothers are wrongfully fired, discriminated against, and not hired,” she complains.

“Sexualized but not equalized,” Farrah says. “Puppeteered like suburban housewives.”

“Cheated on and not shown proper love,” Farrah continues.

“Mothers, this is a verbal hug to you,” she says.

“You are not the pressures, a national teacher’s board, a pandemic, a company,” Farrah rambles.

Farrah continues with a weird twist: “A man, a terrorist group, a cult.”

“A criminal society,” she continues, “a rape culture society, a fraudulent government, a hateful news station.”

“And any other bad friendships, relationships, letdowns this past year plagued on you,” Farrah says.

It is of course no real surprise that Farrah couldn’t resist griping about her firing and how no one reputable wants to work with her.

However, the “fraudulent government” line combined with other weird lines about “a cult” and “a hateful news station” … it’s bizarre.

Farrah is a deeply weird person, but people wouldn’t mind so much if she were not as bigoted and malicious as she is.