EDEN CONFIDENTIAL: Married Duke of Norfolk – who is in charge of organising Prince Charles’ Coronation – finds love with mother of model Frankie Herbert– just a week after revealing his 34-year marriage was over

The Duke of Norfolk, who told me last week that his 34-year marriage was over, has not had to wait long to find love again.

I can disclose that the Duke, Edward Fitzalan-Howard, whose role is to organise Prince Charles’s Coronation, is courting the ex-wife of one of the Queen’s confidants.

‘I am going out with Chica Herbert,’ the Duke confirms.

Vivacious Francesca, or Chica, as she’s known to pals, is the former wife of Harry Herbert, son of the 7th Earl of Carnavon who was the Queen’s racing manager and a close friend. 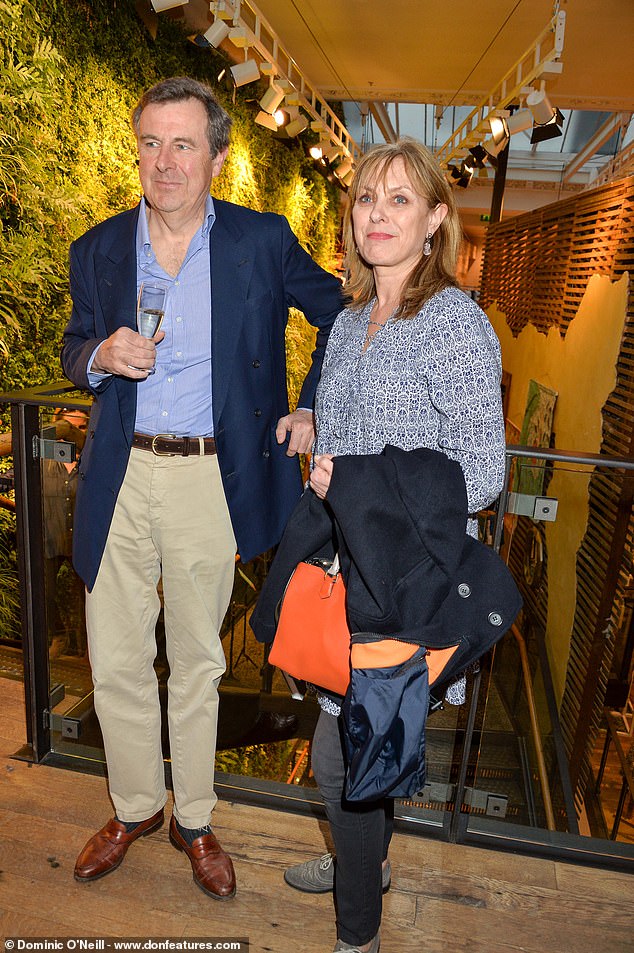 The Duke of Norfolk (left, with his wife in 2016), who told me last week that his 34-year marriage was over, has not had to wait long to find love again. I can disclose that the Duke, Edward Fitzalan-Howard, whose role is to organise Prince Charles’s Coronation, is courting the ex-wife of one of the Queen’s confidants 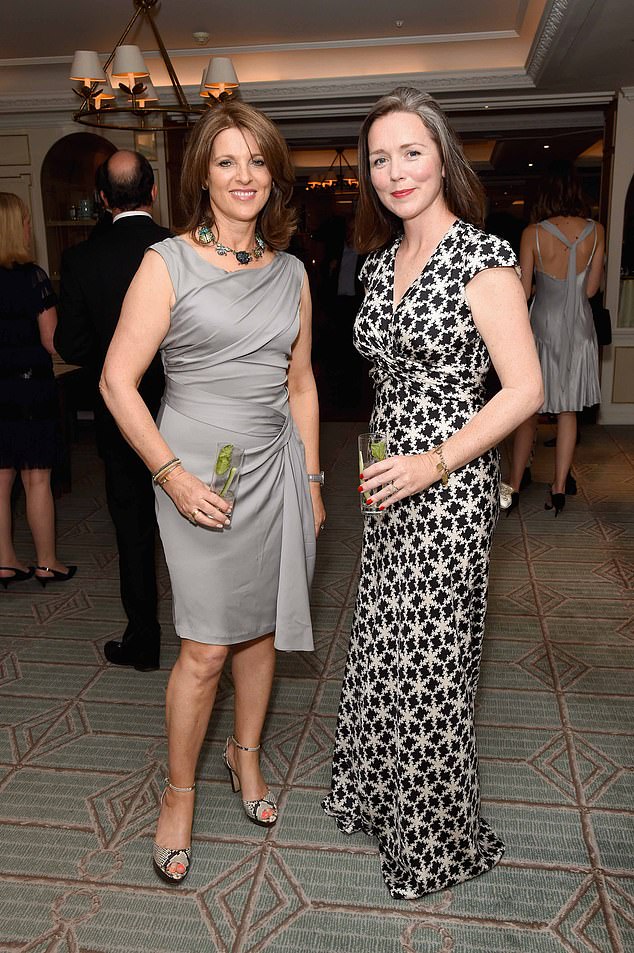 Vivacious Francesca, or Chica (left), as she’s known to pals, is the former wife of Harry Herbert, son of the 7th Earl of Carnavon who was the Queen’s racing manager and a close friend

When Chica Bevan married Herbert in 1992, Princess Diana as well as the Queen attended the wedding at Highclere Castle, the Carnarvons’ ancestral home where Downton Abbey was filmed.

Friends say the Duke’s relationship with Chica, 58, is serious, but it remains to be seen whether he divorces his wife, Georgina. He is the most senior lay member of the Roman Catholic Church in Britain, so divorce would normally be frowned upon.

On Saturday, I disclosed that the Duke, 65, who has five children with 59-year-old Georgina, had given up hope of salvaging their union. ‘I want to make it clear our marriage is over,’ he told me. 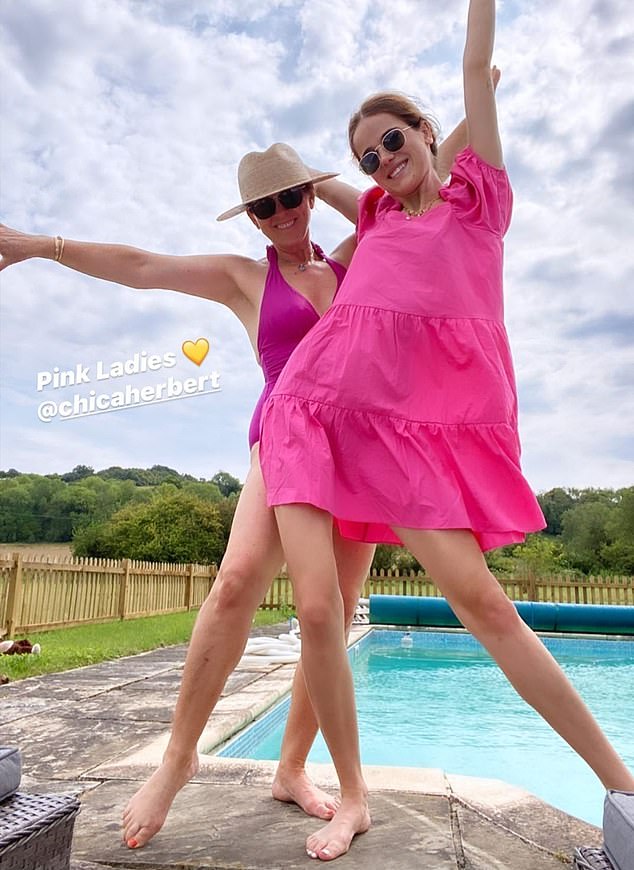 In the pink: Chica Herbert and her daughter, top model Frankie

Friends had been delighted after the couple were reunited in 2016 following a trial separation when the Duchess moved out of their magnificent family seat, Arundel Castle in West Sussex.

During that time the Duke enjoyed a close friendship with Jeannie Lopes, ex-wife of Lord Roborough.

The Duke and Duchess of Norfolk had stayed away from the wedding of Prince William and Kate Middleton in 2011, perhaps to spare the Royals any embarrassment.

He is currently living at a 19th-century manor, Peppering Farmhouse, in the West Sussex village of Burpham, while the yoga-loving Duchess has moved into a property elsewhere on his 24,000-acre estate.

Meghan has managed to keep Prince Harry away from his guns, but his foreign kinsmen are less ‘woke’. Crown Prince Frederik of Denmark, who’s married to Australian former advertising manager Mary Donaldson, has just returned from a shooting trip with 50 friends in which they killed deer, foxes and raccoons in Lindet and Lovrup Forest. ‘It is important to regulate, so that there are not too many animals out in the woods,’ the Danish heir to the throne explains.

Sam scrums down to pop the big question

More used to bringing opponents to their knees with his tough tackling, England rugby union star Sam Underhill has gone down on bended knee himself.

The 25-year-old flanker proposed to his girlfriend Josie Jennings, later joking to friends: ‘Got my knee a bit muddy.’

Josie, who graduated from Bath University last summer, showed off her sparkler to pals, telling them: ‘Best weekend ever — could not be happier.’

Grammar-school educated Underhill was a student at the same university and now plays for Bath. 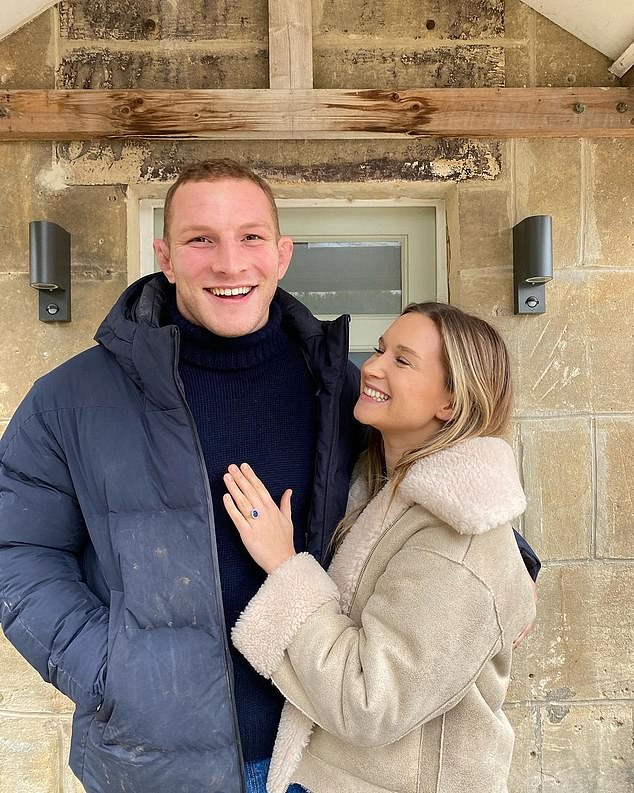 The 25-year-old flanker proposed to his girlfriend Josie Jennings, later joking to friends: ‘Got my knee a bit muddy’

Boris Johnson has, confusingly, advised us to work from home but carry on attending Christmas parties. So Universities Minister Michelle Donelan is going ahead with her wedding tomorrow, I hear.

The Tory MP for Chippenham, Wiltshire, is due to exchange vows with businessman Tom Turner in a church ceremony, followed by a lavish reception.

Donelan, 37, and her groom came under fire from the Good Law Project after his firm, Stronghold Global, won lucrative PPE (personal protective equipment) contracts during the pandemic.

I bet that won’t be mentioned in the speeches.

Many stately homes contain a multitude of ancient relics — and not just the old relations roaming the halls. But something rather special has been found at Althorp House, Northamptonshire, ancestral home of Princess Diana’s family. Her brother, Earl Spencer, reveals: ‘Lovely Roman coin found by detectorists in the grounds of Althorp House today. It’s from the reign of the Emperor Antoninus, Hadrian’s successor. Remarkably good condition for a coin that’s nearly 1,900 years old.’

Is that downward dog, Tess?

As tension rises ahead of the Strictly Come Dancing final this Saturday, Tess Daly is trying to find her inner zen.

The BBC1 show’s co-host shared this selfie of her with her ‘yoga pal’ Mickey, her Maltese Shih Tzu.

Tess, 52, who wore blue leggings and a matching sports bra for her session, says yoga helps with her mental health: ‘It’s great for putting you in a really good headspace so you feel like you’re in control of your day.’ 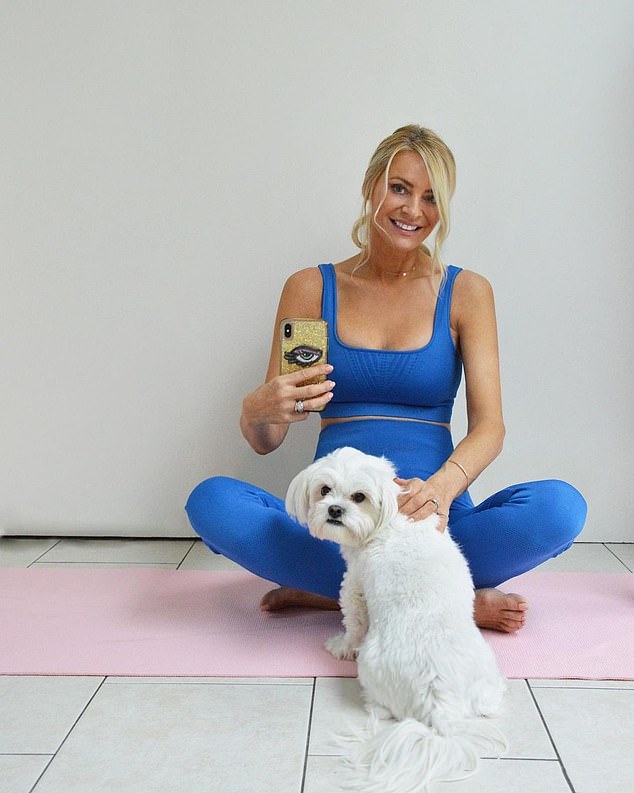 As tension rises ahead of the Strictly Come Dancing final this Saturday, Tess Daly is trying to find her inner zen

Idris Elba, who could be the next 007, has added a few noughts to his bank balance. I can disclose the 48-year-old Luther star made more than £2.4 million in the past year, despite lockdown.

He set up Green Door Pictures in 2013, with its principal activities listed as content production across film, television and digital. IE7, which was established in 2016, is his performing arts business and is the more lucrative of the two companies. Its net worth is £5.4 million, compared with £2.8 million for Green Door Pictures.

Elba managed to keep busy making films The Suicide Squad and The Harder They Fall during 2020, the year covered by the accounts.

Does everything associated with the Earl of Cardigan have to be acrimonious? He is estranged from his two children, The Voice star Bo Bruce and her older brother, Tom, Viscount Savernake.

Now, the new owner of his ancestral home, Tottenham House, is involved in a row over plans to build six houses in the grounds of the Wiltshire property.

Hedge fund manager Chris Rokos bought the Grade I-listed pile for about £16 million from its trustees in 2019. The Tory donor is now seeking permission to build two homes for family members as well as four estate cottages.

But irate neighbour John French complains: ‘One would have thought visitors could be accommodated within Tottenham House itself.’