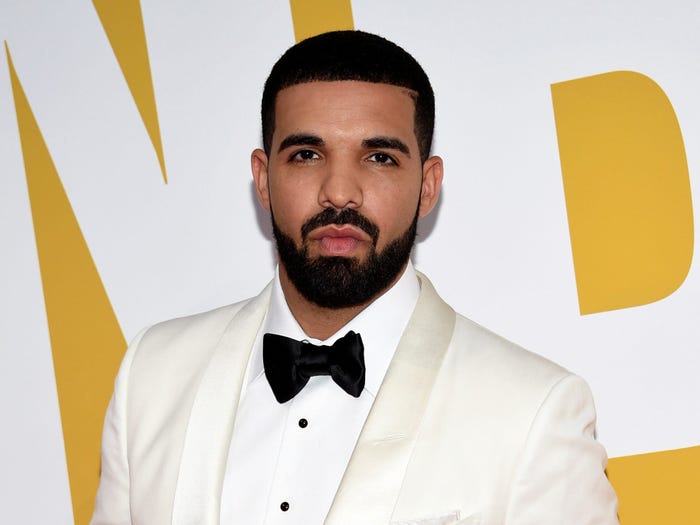 In the pictures posted to his Instagram Stories, the toddler can be seen sitting on a bed as Drake ties a blue durag around his head while Drake's mother, Sandy Graham, stands next to the bed.

While Drake's Instagram grid mostly features pictures of his famous friends, luxury cars, and sponsorships, Adonis makes an occasional appearance, after years of being kept off of his famous dad's social media.

Drake first posted a picture of Adonis on Instagram in March

Dressed in black, Adonis made his debut on his father's Instagram on March 30, 2020, over two years after he was born.

"I love and miss my beautiful family and friends and I can't wait for the joyful day when we are all able to reunite. Until then please keep your lights on," Drake wrote in the caption, likely referring to the coronavirus lockdowns keeping families apart. The carousel also featured pictures of his parents and Adonis' mother, Sophie Brussaux.

Brussaux is a French artist and former model.

"It was great to just share that with the world," Drake said of his decision to start posting photos of Adonis in an interview with Lil Wayne for Young Money Radio.

Since then, Drake has publicly marked other important occasions with cute snaps of Adonis, like Father's day and Adonis's first day of school.

Adonis was born in October 2017. After several months of media speculation, Drake officially confirmed that he was a father in June 2018 through lyrics in his album "Scorpion": "I wasn't hidin' my kid from the world/I was hidin' the world from my kid."

A few months later, in October 2018, he said "I have a son, he's a beautiful boy," on HBO's The Shop, in conversation with LeBron James.

Even before making his official debut, Adonis had a presence on Drake's Instagram. In December 2018, Drake proudly posted a finger painting by the toddler with the caption, "Adonis > Picasso don't @ me."