Jersey Shore: Family Vacation star DJ Pauly D is headed to Hell … Michigan, that is. The reality TV star and Chef Action Bronson will be in Michigan, on April 30 for a bash that’s guaranteed to be spicy. We caught up with Pauly DelVecchio via Zoom to learn more about the event and get his take on the Flamin’ Hot Mountain Dew flavor.

Mountain Dew Flamin’ Hot is back

PepsiCo. first introduced the Flamin’ Hot flavor of Mountain Dew in August 2021. The brand describes the drink as a combination of “the sweet, citrus flavor of Dew with the spicy, kicked up flavor of Flamin’ Hot.”

As Pauly described it: “It’s so, so good. If you like spicy, it’s a mix between sweet and spicy. It’s combining the two [flavors, making it a] win-win because you wash [spicy] down with the Mountain Dew. Now you get it both in one shot.”

The drink sold out in under an hour of it’s release in 2021, but it’s back by popular demand. Now, Mountain Dew Flamin’ Hot is the official drink of Hell, Michigan.

“So, we’re going to go to Hell,” Pauly joked during our call. In all seriousness, he thinks the partnership just makes sense. 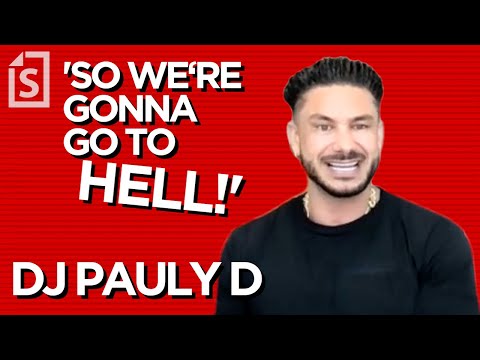 “What’s really dope about it is obviously Hell’s hot, Flamin’ Hot Mountain Dew’s hot, and then my beats are fire,” he said. “It’s like a match made in heaven.”

At first, Pauly thought the offer was a joke. “When they asked me to do it, I was like, ‘Go to hell?’ I thought they were just messing with me.”

He added: “But no — how do you make an event even hotter? You get Pauly D to bring his hot beats and make it a fire evening.”

Aside from hearing DJ Pauly D’s fire beats, chef and rapper Action Bronson is preparing a four-course menu of “spicy meets sweet” items that are “bold as hell.”

“Action Bronson is going to be cooking up some meals that are catered toward the taste,” the Jersey Shore star explained to us. “I’ll be cooking the beats; he’ll be cooking the meals. Everybody can try it when we all go to Hell, Michigan.”

Aside from beats and grub, the event will also feature Sparky’s Saloon, where fans 21+ will find a Flamin’ Hot-inspired mixology menu. There will also be a Mountain Dew Flamin’ Hot Country Club, a takeover of Hell’s 18-hole putt-putt course.

Where to find the Mountain Dew Flamin’ Hot event

Admission to the event is free, but it’s being capped at 2,0000 guests so get there early! The fun begins at 6 p.m., DJ Pauly D takes the stage at 8 p.m., and the fun ends at midnight.