David Muir sure is one proud family friend! Loyal fans of the news anchor know just how close he is with fellow host Kelly Ripa, and he just expressed his support for the Consuelos-Ripa family in the sweetest way.

MORE: David Muir’s mom is the epitome of glam in photo alongside her famous son

Kelly’s middle child, Lola Consuelos, just released her first ever single, a song titled Paranoia Silverlining with artist JO JO, and she has been showered with love and compliments for the song since, from her family and friends alike.

David is the latest to do so, giving a sweet shout out to the aspiring singer to his half a million Instagram followers.

He took to his Instagram Stories to rave about the song, sharing a screenshot from Apple Music that he took as he was listening to the vibey new single.

He captioned the endearing show of support with: “Proud of you @theyoungestyoung,” which is Lola’s handle on Instagram.

David even revealed that the song was serving as his work-out motivation of the moment, adding: “Fueling my run.” 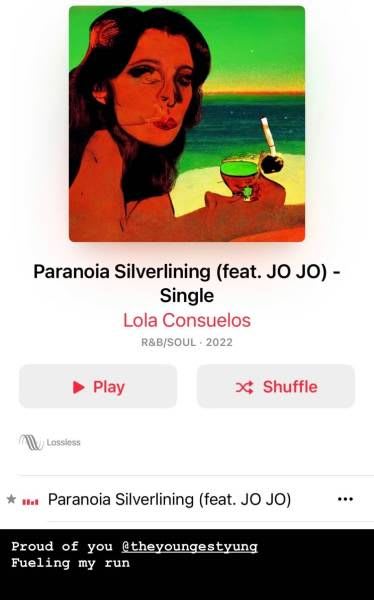 The star’s heartfelt shout out

Lola’s family have been actively rooting for her since she announced the upcoming release of the song, and took to social media to promote it the moment it was released.

MORE: David Muir opens up about childhood and career origin in rare interview

Her older brother Michael, whose posts to Instagram are few and far between, wrote: “My sister made a frigging amazing song. Check it out on Spotify NOW.”

Both of her parents also promoted the song, even as they take a well-deserved break and have some fun in the sun during their latest lavish getaway.

They took advantage of their stunning beachy location and shared a video which captured the two laying on pool loungers – and showing off their tan – as the camera panned beyond them and past the stunning infinity pool and even more impressive view that they were lounging by.