Dan + Shay Credit the Pandemic for Creating Their 'Best Album Yet'

Dan + Shay have a new album out, and it might just be their best work yet. The duo sat down with ET’s Rachel Smith to discuss their latest release in three years, Good Things, and how the pandemic made it possible.

“Oh man, I mean this is the first time we have actually had time and I mean I guess it’s a good thing because it is our fans fault,” Shay Mooney shared. “They loved the music, so we had to get on the road and actually sing those songs for them, and we were so busy touring that  before the pandemic hit, we were fully in tour mode and we were getting ready to start the tour, and an album was kind of in the back of our mind, and we obviously wanted to put out a new body of work, but we just didn’t have the time that present time that we were in, and this ended up being one of the positives that came from being in the pandemic and just being able to be home.”

Critics are calling Good Things their best work yet, and the pair agree, calling it a piece of working they are “really proud of.”

“I feel like we put a lot of pressure on ourselves. I was just sitting there on our phone one night and we tweeted we just finished our best album yet, and right as I said it I was like, ‘That is a lot of pressure’ and I just put a target on our path,” Dan Smyers shared.

Adding, “There is going to be one guys that is like, ‘Well it is pretty good, but not as good as the second album,’ and I was like, ‘Well we are really proud of it and we feel like it is our best yet.'”

The album release concert promises to be an emotional moment for the group, who have just gotten back on stage after being off the road for over a year.

“It’s so tough, you can see people commenting on social media and stuff, and that’s amazing there’s nothing like the gratification and the feeling of being on stage and hearing fans sing the words back to us, so being out here in Nashville with thousands and thousands of fans coming out to the show and celebrating this new album, I feel like it’s gonna be a really special moment,” Dan gushed about their Good Things release concert which went down last Friday in Nashville. “We’re gonna play new songs, so we released the title track, Good Things, a few weeks ago and we went back out on the road and did our first show, by the time we played that show, the song had been out for six days, and the fans knew all the words, so we got a new challenge for them, we’re doing a show and the music’s only been out for less than 24 hours, so we’re definitely gonna try and see if they know the words.”

While touring was put on hold due to the pandemic, new music means these two are hitting the road again, and nobody is as excited as their wives, Hannah and Abbey.

“They’re trying to act like they aren’t like, ‘Oh no, yeah you’re leaving, oh no,'” Shay shared. “When the pandemic hit, I was just pacing around the yard like changing light bulbs. I was probably annoying the heck out of her,” Dan added.

But that doesn’t mean they won’t be popping in on their husbands on the road. The duo shared that they got two buses so their kids, wives and fur babies could all join and be comfortable.

“Dan works a lot through the night, and I you know there’d be crying babies in the middle of the night, so I didn’t wanna do that to him, so I finally had to split it up so we would have room for the families,” Shay, who just welcomed his second child, a son named Ames with his wife, Hannah in Feb. 2020.

“It’s good, you know, we’re all out there on the road and we’ll definitely have the kids out there, but I’m sure that they’ll be selective ’cause they’re like, ‘Alright you can go, and just go we’ll be here when you get back’ for a lot of it,” he went on to say. 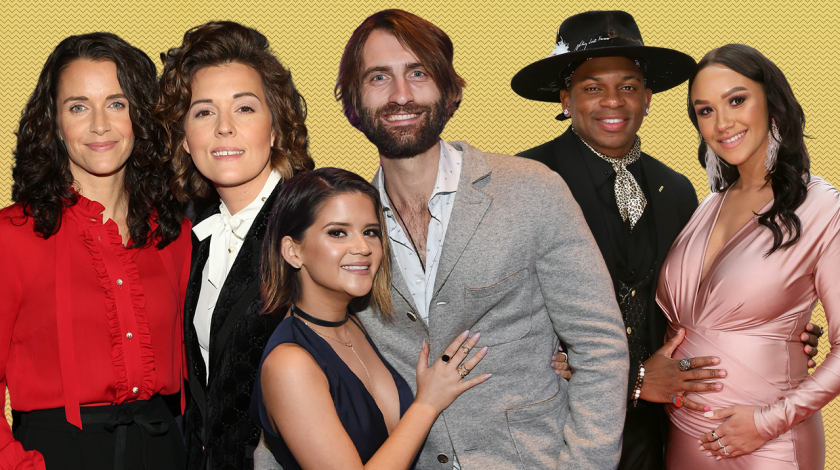