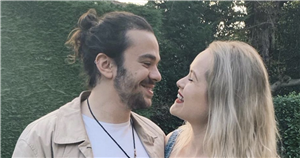 Popular ITV soap Coronation Street closed the doors on one of their much-loved young characters, Seb Franklin, on Friday 7 May.

Son to Abi, played by Sally Carman, Harry Visinoni's character died as the result of a vicious attack against him and his girlfriend Nina, who is portrayed by Mollie Gallagher.

Now, Sally has revealed her 21 year old colleague Harry's real life girlfriend Ellie Isaacs stepped in to act as her double as she reached out to hold Harry's hand during the show.

The actress, 40, explained there was no other way around it due to restrictions brought on by the ongoing coronavirus pandemic.

Speaking to Metro.co.uk, she said: "There was one scene where Seb had died and I had to say goodbye to him.

"I was stroking his face and we had to have Harry’s girlfriend as my hand double. Weirdly, it worked. When you are in that zone, it works so it was fine."

Harry previously opened up on closing the door on his Corrie career in an exclusive interview with OK! Online as he said: "It is a huge story. "It was in October and I'd asked to meet with Iain [MacLeod], the executive producer, to talk about potential avenues for Seb and this was basically proposed as an option."

“This has only been my second job and I never intended to be here forever,” Harry admitted. “It seemed like a fitting end for the character and a great way for me to end it.”

Harry confirmed he got involved in researching the storyline as well. He joined in on Zoom calls with the Sophie Lancaster Foundation who worked with Coronation Street on the hate crime storyline.

As for playing dead, Seb said: “It was fine really. You’re just laying in a bed all day.”

He added: “I think it's tougher on the others like Sally [Carman]. She was in there pouring her heart into the scenes and did an awesome job. I was awestruck.”

When asked what kind of plans he had for the future, Harry said: “I'm just going to see what happens really, just see where things take me.”

Determined to hone his acting ability in a different setting, Harry expressed a desire to do more work on stage.

He said: “I'd love to do some theatre. I think that's something that I'd like to explore because I feel like I should do. The only theatre I've done so far was in school plays, playing roles like the Artful Dodger.

"So I think that's something I'd like to do quite soon, once everything's back to normal.”