Clare Crawley and Blake Monar Cozy Up on Instagram: Could They Be Shagging? 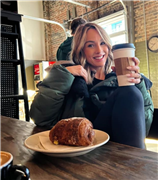 Clare Crawley has seemingly gone from laying into Dale Moss…

… to getting laid by Blake Monar.

If a certain recent Instagram photo is to be analyzed and believed, that is.

On Sunday, January 9, the polarizing ex-Bachelorette posted to her Instagram page a video montage from a trip to Indiana.

To the surprise of many observers, it featured Crawley looking pretty darn cozy with Monar, a grooming specialist who she sent home after just two weeks of the dating show in late 2020.

The fooage was uploaded just over three months after Clare and ex-fiancé Dale Moss, who she chose as the winner of Season 16, broke up for the second and final time.

“Went for business, left with the most unexpected remarkable memories!” Clare captioned her post. “Indy, you were truly beautiful and exactly what my soul needed.”

In the social media clip, which has fans across the nation buzzing, Clare and Blake are seen shopping and riding in a car together, going bowling and playing with his niece and baby nephew.

For his part, Monar — who also competed on Bachelor in Paradise Season 7 last summer — shared on his Instagram Story a video of himself and his niece pushing Clare on a toy car inside a house.

He also shared a clip (above) of himself and Crawley walking outside together, with his arms around her.

“How’s walking on black ice with a grown man hanging on your back @clarecrawley?” asked Monar as an intriguing caption.

Neither Crawley nor Monar have commented on these posts and/or the status of their relationship.

Clare, however, has said plenty of late about Moss.

“It’s the deep pain of — this is the one that gets me  — like, how do you say goodbye to somebody you never wanted to walk away from?” she said on Jana Kramer’s podcast Whine Down With Jana Kramer in October.

Crawley allegedly felll so hard in love while filming The Bachelorette that she saw no reason to go on with filming.

After just a month or so on set, Moss proposed… Crawley said yes… the two left the program and Tayshia Adams took over as the show’s anchor.

After giving numerous interviews together as an engaged couple, and swearing their love was real and talking openly about having kids in the near future, Moss and Crawley split in early 2021.

They got back together just a few weeks later, though.

This fall, however, Crawley and Moss broke up again.

And it didn’t take long for things to turn ugly.

“I always feel like I do not want to have regrets and I don’t even know if I would have done things differently because I was doing the best I could at the time with the information that I had,” Crawley continued on the aforementioned podcast.

“And if my biggest regret is trusting the process, trusting a man’s words and who he showed me he was, I don’t think that that’s a regret.”

“I believed somebody that they were who that they said they were [and] that they would hold up to the promises that they make when they get down on one knee.”