Christina Haack: My Ex-Husband is Trying to Steal Our Kid! But My New Husband is Awesome! 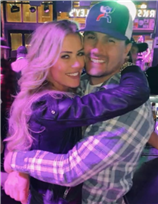 Christina Haack is involved in an ugly custody battle at the moment.

But she’s grateful to have found a beautiful person to love.

Such was the message this HGTV personality shared on Sunday, uploading a photo oof herself and Josh Hall to Instagram and giving thanks for her third husband in the emotional caption that accompanied it.

“May has never been a great month for me,” opened Christina.

“Not sure what that means astrologically or spiritually but I’ve had some of my worst times in May.

“The difference is this May I have a man who treats me with unconditional love and respect.”

This seems to be a not-so-subtle dig at ex-husbands Tarek El Moussa and Ant Anstead, the latter in particular, we assume.

Concluded the former Flip or Flop host on Mother’s Day, referring to Hall and what she’s going through all of a sudden:

“Standing by me and helping me through these times as I feel like I’m being sucker punched left and right.

“It’s when you have your lowest moments that test your relationship when you really see what kind of people you are together.

“If you have a person who loves and respects you hug them extra tight tonight because trust me not everyone has this.”

Haack and Hall for married in April.

Just a few weeks later, Anstead filed for primary custody of Hudson, the two-year old son he shares with the reality star.

In this filing, Anstead trashed Christina as a deadbeat parent, writing that she has allegedly spent an average of “9 full days each month” with Hudson over the last 20 months.

Anstead also accused his ex of exploiting the young boy, sharing his photo on social media at all times in order to build her following — and even using the kid at times in paid/sponsored posts that earn Christina money.

Late last week, Anstead asked a judge to ban Hudson from being featured in any of Haack’s television shows without his dad’s consent.

Specifically, Anstead has requested an “order restraining both Christina (and me) from using Hudson or Hudson’s likeness or image in any commercial endeavor, social media paid promotion, television or streaming program, or which might otherwise commodify Hudson without the express advanced written consent of both parents in writing.”

The above quote comes from Ant’s recently-submitted legal documents.

The England native and the interior designer got married in December 2019… welcomed their son in September 2019… and broke up about a year later.

“We are grateful for each other and as always, our children will remain our priority,” Christina said in September 2020, seemingly confirming an amicable break-up.

That was back then, however.

“What Ant is doing deeply saddens me,” Haack said in a statement after Anstead’s custody following.

“If this was really about Hudson, as he says, this should have been handled privately with a private judge or mediation, as myself and my attorney have suggested.

“I have had my share of ups and downs but I am a good mom and I love my children with all my heart and I will always protect them.”

Hall, meanwhile, has issued his own passionate defense of his wife on Instagram.

“Never did I think taking on 3 kids from 2 other males would be easy,” wrote Hall as a caption to the above photo of himself, Haack and her kids on social media.

“What I was sure of, the woman connected to them was worth it all. I am not these kids biological father, they have those. What I will be is the best example of a quality human being, always show them how to treat their mother with respect and support them in any way I can during their development.

“Coming from a split home myself, I know it’s not easy on youngsters, but in todays world sadly, it’s pretty common.

“So Christina and I will always remain unfazed by any outside noise and save the kids from any unnecessary trauma.”