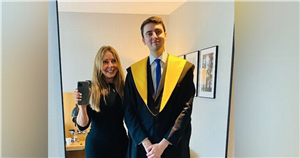 The TV star was rightly proud of his Masters graduation and wanted to share the moment with her fans and followers.

She took to her Instagram stories to share the news via video, celebrating how he has overcome many barriers, including learning difficulties, to achieve this educational milestone.

Carol was filled with pride, explaining how Cameron, 24, has received a Masters degree from the University of Dundee.

Her son looked handsome in his graduation robes, posing alongside his mother.

Carol was also dressed up for the occasion, sporting a chic long-sleeved black dress with a pencil skirt cut, showing off her enviable figure.

She wrote on Instagram: ”Such a wonderful day @dundeeuni.So Cameron was in a special school with severe learning difficulties for most of his early life but he's worked hard and learned strategies and boy how he's turned it all around.I couldn't be prouder of him.”

She also added: "We never dared to dream this day might come when he graduated with a first class honours last year and now a Masters degree in Animation and VFX… Thank you Dundee for giving him all that you have over the last year. Amazing”

Carol has previously spoken very openly about the difficulties that her son has faced over his educational career.

During a chat with the Daily Mail, the 60 year old celebrity explained how her youngest child’s learning difficulties have made his educational journey challenging.

He was rejected by schools on the basis that he was "disruptive” and deemed “unteachable”.

"By six, this child I loved so much, that I would have done anything for, was being rejected – by the school, by the teachers, by the other pupils. It was heartbreaking, utterly heartbreaking,” she said.

"And I was lost. Was I going to have to teach him at home, myself? How? I just wasn't equipped. I didn't know how to teach a child with this level of special needs.”

Cameron’s first headteacher threatened to make him leave the school but he has since gone on to achieve huge things. Carol explained her son’s varied needs, saying: "There are overlapping circles, with severe dyslexia, dyspraxia, ADHD, ADD and autism. Cam has severe dyslexia, ADD and ADHD."

But he has gone on to overcome these initial obstacles and his mother could not be more proud.

For all your latest updates on Carol Vorderman, sign up to OK!'s daily newsletter.