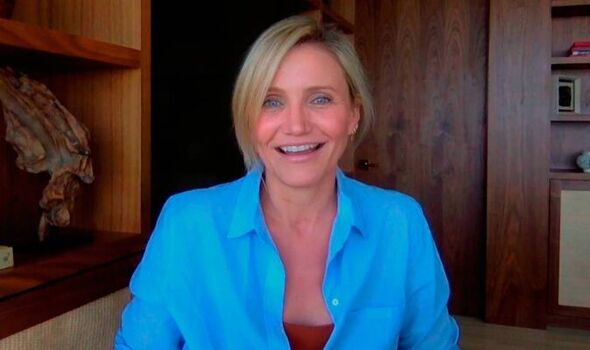 And the 49-year-old star of hit movies including The Mask, There’s Something About Mary and Charlie’s Angels is happy to no longer be trapped for hours a day fighting back the ravages of time.

“Literally the last thing I think about on a daily basis – maybe not at all during the day – is what I look like,” she revealed.

“I literally do nothing. I, like, never wash my face.”

Yet unadorned by layers of makeup and artifice, she remains one of the world’s most beautiful women.

But don’t look for her in any forthcoming films. Indeed, think back and you won’t recall seeing her in any recent movies.

Quietly, without fanfare, Cameron Diaz quit Hollywood eight years ago at the peak of her success to focus on love, marriage and, later, parenthood.

Far from the public gaze, she relishes her role as loving wife to Good Charlotte rocker Benji Madden, and mother to their two-yearold daughter Raddix.

Diaz now looks back on the years spent being scrutinised under a camera lens, and the hours spent in studio make-up chairs staring self-critically at her flaws in a mirror, and admits: “It’s toxic. You just start to pick yourself apart.”

That all ended in 2014 when she walked away from Hollywood without looking back.

“I’ve given more than half my life to the public,” she says, having found fame at the age of 21 in her 1994 film debut The Mask opposite Jim Carrey, following a successful modelling career.

“I feel it’s okay for me to take time for myself now, to reorganise and choose how I want to come into the world – if I decide to. I don’t miss performing.”

She wearied of still being offered roles as a blonde bimbo into her 40s, and was exhausted by Hollywood’s long hours – even earning £15million a movie.

“I just decided that I wanted different things out of my life,” Diaz confessed in a 2020 chat with her friend Gwyneth Paltrow.

“I had gone so hard for so long, working, making films, and it’s such a grind. And I didn’t make any space for my personal life.”

Filming can be tough: “You’re there 12 hours a day for months on end. You have no time for anything else.”

“I decided to stop making movies and really focus on my personal life, my personal relationships with my family, my friends,” she explained.

As she approaches her 50th birthday in August, Diaz is embracing life away from the cameras. “For a long time acting consumed her world,” says an insider. “Now, she feels much more balanced and healthy.”

Another says: “Cameron is just so content and happy in her bubble with Benji and their daughter.”

After eight years away from Hollywood’s glare, Diaz has happily gone feral.

“I’m like a wild animal, like a beast!” she told RuPaul’s Drag Race judge, Michelle Visage, in her Rule Breakers podcast earlier this month.

Diaz turned from Hollywood after an exhausting six months filming three movies back-to-back at the end of 2013: playing Miss Hannigan in the musical Annie, co-starring with Jason Segel in comedy Sex Tape, and a vengeful mistress in The Other Woman.

Taking a break from the spotlight, she quickly became caught up in a whirlwind romance with rocker Benji Madden, six years her junior, following years of shattered romances with high-profile lovers.

Diaz had dated Matt Dillon for three years in the Nineties; romanced Oscar winner Jared Leto over four years before splitting in 2003; indulged a fling with pop star Justin Timberlake; had another fling with Jennifer Aniston’s ex, British model Paul Sculfor; and dated American baseball superstar Alex Rodriguez before he moved on to an engagement with Jennifer Lopez.

Hopeless romantic, Diaz has confessed: “I would rather have my heart broken a thousand times than never to love at all. I have so much love to give.” She lavished it on Madden, the pair becoming engaged seven months after meeting and marrying three months later, in January 2015.

“I love being married,” Diaz confessed to close friend Gucci Westman in 2020. “The best thing that’s ever happened to me is finding my husband.”

Though absent from Hollywood, Diaz hasn’t been idle, writing anti-ageing guide The Longevity Book in 2016, a follow-up to y vol- her 2013 beauty volume The Body Book.

She dedicated her most recent tome to husband Madden, writing: “I never knew what love was until I found you. How did I ever live without your love, your friendship, your brilliant mind, your genius sense of humour and your enormous, loving, beautiful heart?”

The couple were introduced by reality tv star Nicole Richie, who is married to Madden’s twin brother Joel. The quartet are close friends, often hanging out at Diaz’s £16million Los Angeles mansion. “But Cameron and Benji also make time for date nights and little trips away,” says a friend.

Diaz tries not to rely on nannies, preferring to be a hands-on mum, getting her hands dirty in the garden, and cooking dinner for her family while she watches TV and Madden looks after Raddix.

“He’s such an amazing father,” says Diaz. “He puts her down and I go to the kitchen and I pour myself a nice glass of red wine. I start my cooking, I put on my show, whatever it is.”

That glass of wine is often a product of her small side business: selling organic wine under her Avaline label.

Despite her 49 years, Diaz is open to expanding her family, most likely using a surrogate for the pregnancy, as they did when having Raddix in 2020.

“Benji wants to have two more children, while Cameron is leaving it up to the universe,” says a friend.

“I love being a mother,” says Diaz. “I’m so grateful and so happy and it’s the best thing ever and I’m so lucky to do it with Benji and we’re having the best time.”

She is glad to have put behind her Hollywood’s intense spotlight on her looks. Diaz suffered from acne in her early movies and admits: “I had terrible, terrible skin. It was embarrassing. I always felt bad about myself.”

Studios and critics alike made her feel worse.

“Benji was disgusted,” says a friend. “Cameron is one of the most beautiful women in the world, and here she was being criticised for something beyond her control.”

Botched Botox injections cured Diaz of the desire to find beauty fixes in a needle, lamenting: “It changed my face in such a weird way.”

She’s content now to grow old gracefully: “I’d rather see my face ageing than a face that doesn’t belong to me at all.”

She’s even open to dipping her toe back in the Hollywood waters, in a cameo or small supporting role.

Her one role in the past eight years is a five-second appearance in a zero-budget video short. And she couldn’t be happier.

“It is a fun journey that got me here,” says Diaz.

“I’ve just become comfortable with not knowing what is going to happen. I have total faith that things are going to work out.”