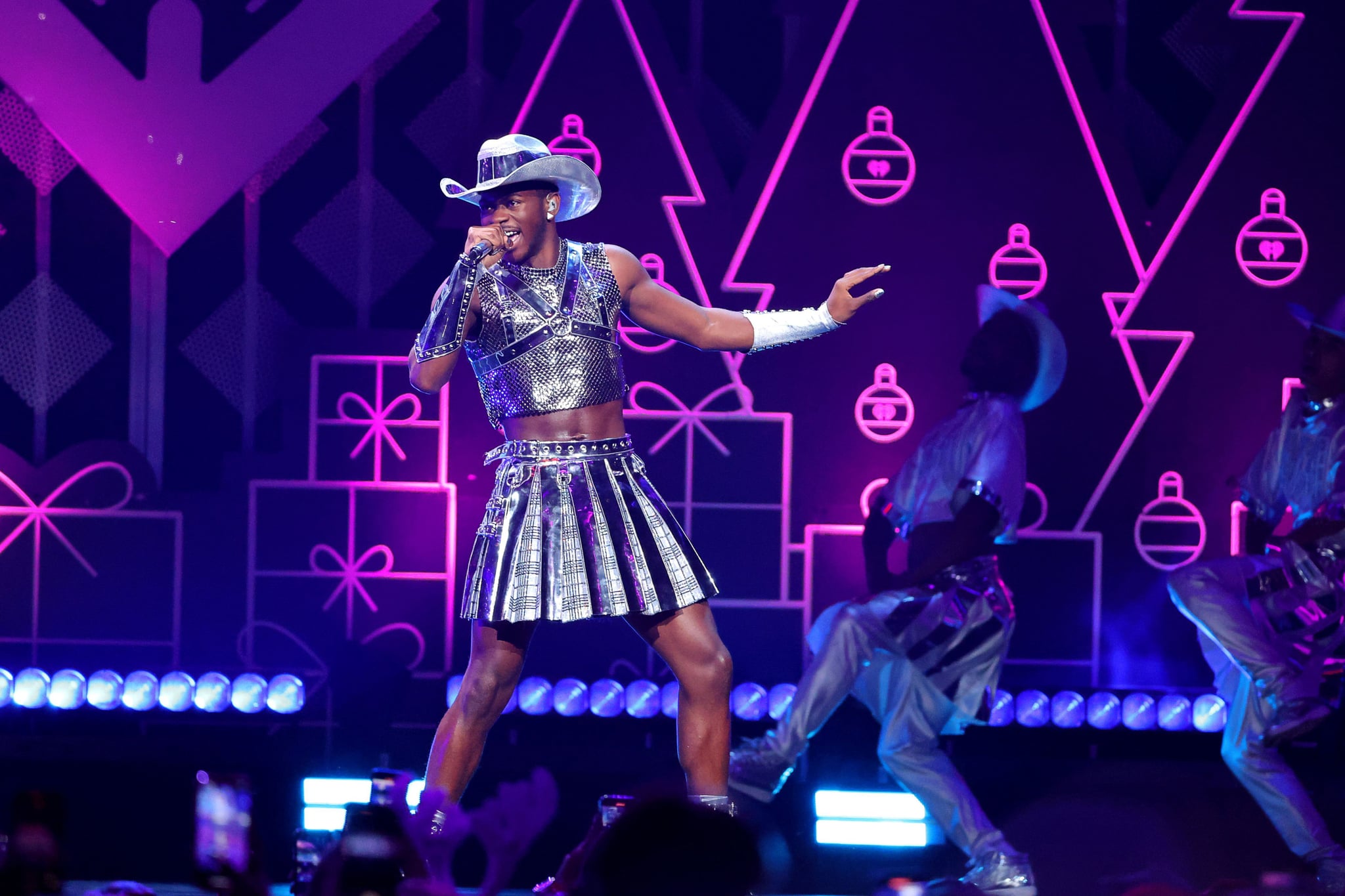 All eyes are on Lil Nas X, as they should be. It seems the rapper is no stranger to breaking the Internet, considering how the world watched in amazement as he charged confidently onto the scene, igniting his legacy with the Grammy award-winning hit, “Old Town Road.” Ever since, Lil Nas X has spearheaded a new genre of hip-hop with chart-toppers like “Industry Baby” and TikTok favorite, “Montero (Call Me By Your Name).” The trailblazer is also widely recognized for his fresh aesthetics and inspiring sense of fashion — wearing beautiful, colorful pieces at lavish events like the Grammys and the Met Gala. Lil Nas X doesn’t exactly bury his feelings, and he isn’t shy about telling you what’s on his mind, so it may seem like the singer-rapper reads like an open book. But for those who lean on the stars for answers, you’ll want to know Lil Nas X on an astrological level. POPSUGAR spoke with CUSP astrologer, Isaiah Alpheratz, for some celestial insight into Lil Nas X’s birth chart.

Your sun, moon, and rising signs make up the big three of your chart. These signs embody your core identity, emotional responses, and how you represent yourself. Lucky for us, Lil Nas X’s birth time is available, so we can take a deep dive into the singer-songwriter’s natal chart.

The sun represents vitality and our true essence. This is the most recognizable part of our chart, as others see in us the traits of this sign. Lil Nas X is an Aries sun, and he’s overflowing with Aries energy. As they kick off the start of the zodiac, Aries is the leader of the pack. They’re bold, fierce, and go after what they want — a true reflection of the way the “Old Town” singer confidently asserted himself in the business.

“Aries are trailblazers and advocates for the underdogs,” Alpheratz tells POPSUGAR. “It’s no surprise that Lil Nas is the first openly gay, Black rapper to top the charts in the way that he did, a feat that deserves praise and celebration! As someone proudly out, he’s undeniably become an ambassador for young queer people, and flaunts his creativity through his music.”

In astrology, our rising sign, or ascendant, is our portrayal of ourselves. This is most notable in first impressions and represents who we are in a social setting. Lil Nas X is a Cancer rising. These signs are known to be very nurturing, sensitive, and intuitive. This makes a lot of sense considering he told the Breakfast Club radio show that he knows he’s going to outdo his iconic singles like “Old Town Road” because of his belief in manifestation, which requires a lot of intuitive practicing, envisioning, and inner work. He’s also committed to supporting the LGBTQ+ community through representation and empowering lyrics, on-brand for a Cancer rising.

Our moon signs are probably the most private planets in our chart, dictating our moods and emotional responses. This heavily aligns with how we express our feelings and handle the emotions of others. Capricorns are very practical and pragmatic; some astrologers say that they are logistical when navigating emotions. They don’t get too swept up in their emotions, which tracks for Lil Nas X who always cracks jokes looks at the lighter side of things — case in point: his Nicki Minaj fan Twitter account. According to Alpheratz, although Capricorn moons are down-to-earth, they don’t take life too seriously that they can’t have fun!

“Although it is not common knowledge, Capricorn Moon’s are huge trolls!” Alpheratz says. “They know exactly how to have fun and offset the business of their lives with activities or actions that bring joy to them, regardless of if those around them agree or not. Nas’ Moon sign also reflects the planning he clearly puts into his creative vision and the execution behind his music.”

Your natal chart consists of more than your big three; in fact, it includes the rest of the planets in our solar system (and some asteroids, too!). The personal planets consist of your Mercury, Mars, and Venus placements. These placements represent your determination, style of communicating, and aesthetics.

Mercury is the planet of the mind, technology, and communication. It rules how we express ourselves through writing, speaking, and even through art. It also represents our mindset and way of thinking. Lil Nas X’s Mercury is stationed in the dreamy and mystical sign of Pisces, which can be seen in his music videos, performances, and his songwriting.

“Mercury in Pisces folks are easily able to envision what it is they want and put whatever they need to into action to ensure they get it,” Alpheratz explains. “It also reflects his creative nature, shown through his music and aesthetics, as a visionary people get to look up to.”

Pisces are storytellers who can romanticize life in special ways, as we can see in the creativity behind music videos like “Industry Baby,” “Old Town Road,” and “That’s What I Want.” Looking at the video for “That’s What I Want” is a prime example for his Mercury in Pisces, as he portrays his romantic desires in a very Piscean way.

Mars rules all things passion, ambition, and drive, and for Lil Nas X, this is a special planet since it’s the planet that rules Aries, his sun sign, so he has a unique relationship with the planet’s personality. He’s extra fiery and passionate, so having this sign as deep and dark as Scorpio, you can bet that the rapper is always going to speak his truth.

“Being able to take charge of the hate he receives and leave his opponents and trolls with egg on their faces is a piece of cake for this Mars in Scorpio native!” explains Alpheratz. “He’s extremely versatile in his music, yet holds his ground on his values and initiatives, true to the fixed nature of this placement.”

Think about the message and storytelling in his video, “Industry Baby,” where he makes a clear and direct message to the viewer about his pride in his sexuality. He has always been passionate about his music and his beliefs, being vocal about his support for the LGBTQ+ community, singing sex positive lyrics, and sharing his life experiences openly.

Venus is the planet of love, romance, and aesthetics. Lil Nas X is a Taurus Venus, a very comfortable sign for this planet to be in. Venus rules the down-to-earth, headstrong sign of Taurus — because of this, Lil Nas X has a clear connection to beauty, romance, and love. Since Tauruses love to be comfortable yet stylish, you can see this sign represented in the creative, lush, and luxurious outfits he wears on the red carpet. This placement also speaks to the aesthetics he uses in his videos, which are always creative and visually appealing.

“Nas’ aesthetics are wonderfully colorful and rich, showcasing his exquisite taste via fashion events such as the three looks he presented at the Met Gala — yes, three!” says Alpheratz. “Each one unique to him and different, his Venus in Taurus shined through as Nas solidified himself as a young fashion icon.”

As a cardinal fire sign, Lil Nas X is a trailblazer in every way. In Aries fashion, Lil Nas X made history as the first openly gay rapper nominated for top Grammy categories. He isn’t just expressing his truth and changing the hip-hop industry, but he has also become a powerful beacon for Black individuals in the LGBTQ+ community — paving the way for a new wave of musicians to come. And it doesn’t get any more Aries than that!