Britney Spears Blasts Paparazzi: F–k You and F–k OFF! 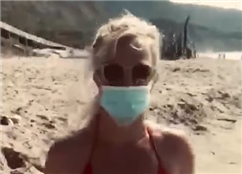 Not even a full week after Britney Spears’ historic conservatorship testimony, she is being plagued.

Having courageously spoken out against her awful father, other family, and her conservatorship, she’s at it again.

This time, Britney is publicly calling out photographers for stalking her … and telling them to f–k right off.

When we write “f–k off,” those are her words, not ours. But she’s right.

The beloved singer took to Instagram this week because her visit to Maui saw her haunted by paparazzi.

In response, Britney posted a video instructing the world on how to behave like decent human beings.

It looks like her days of suffering in silence are over.

And that’s a good thing.

Even the video itself wasn’t silent — as it was set to Lily Allen’s “F–k You.” That’s the song’s real title.

“Do’s and Don’ts if you are a pap, fan, or anyone in my space,” the video begins.

First up is good advice for just about anyone who don’t know each other and their boundaries really, really well.

Britney also showed off her legendary body on the beach, wearing only a bikini and a mask.

“This is my body!” she wrote. “Stop messing with my pics!”

“And,” Britney continued, “editing them to the point where it’s embarrassing!”

She also showed a glimpse at a Pride Month celebration.

According to the caption, the entire crowd had broken out into “Oops … I Did It Again.”

That Britney classic was accompanied by well wishes to Britney from many of her core supporters.

“This is what fans and paps should be doing instead!” Britney suggested.

June is Pride Month, and with vaccinations and masks, some amount of joyous celebration can be done responsibly despite the pandemic.

Britney’s suggestion is not bad. Pride is always a protest, but it’s also often a party.

Britney also included a caption to her video.

“So being here in Maui is pretty crazy now …” she expressed.

Britney wrote that “the paps know where I am and it’s really not fun !!!!”

Sadly, that is not the worst of it.

“But not only do they take my picture … they distort my body,” Britney expressed.

If we want to know what Britney’s body looks like, we can all see it for ourselves on her Instagram.

“I know my body is not perfect,” Britney stated.

“But,” she added, “I definitely do NOT look like how they portray me.”

There is a long, ugly history of using lighting, lenses, and even editing to body-shame celebrities.