Brian Austin Green took to Instagram to share a new pic of his girlfriend Sharna Burgess posing and smiling in a pool with his three kids and she called it ‘the best.’

Brian Austin Green, 47, recently enjoyed time in the pool with those closest to him! The actor posted a brand new pic that featured his girlfriend Sharna Burgess, 35, having a little fun in the sun with his three kids Noah, 8, Bodhi, 7, and Journey, 4, who he shares with ex Megan Fox, 35, and they were all smiles. In the cute snapshot, the blonde beauty can be seen wearing a white and black patterned swimsuit as she stands in the pool with the youngsters, who are looking at the camera while one of them holds an inflatable ball and another wears goggles.

Sharna had her hair pulled up into a loose bun and looked as relaxed as could be as she happily stayed close behind the trio. “Pool days 🙂 ❤️,” Brian captioned the photo, which was met with a lot of kind comments, including one from Sharna herself. “The best days,” she wrote along with her own red heart emoji.

Other followers gushed over how “amazing” it is that Sharna seems to already have a close relationship with the kids. “Love this, now a single mom of three I can appreciate a amazing woman in my kiddos life. ❤️,” one wrote while another exclaimed, “Beautiful Sharna with 3 cutie pies!!! ♡♡♡♡” A third shared, “Sharna is beautiful and your kiddos look so happy in that refreshing pool pic.” 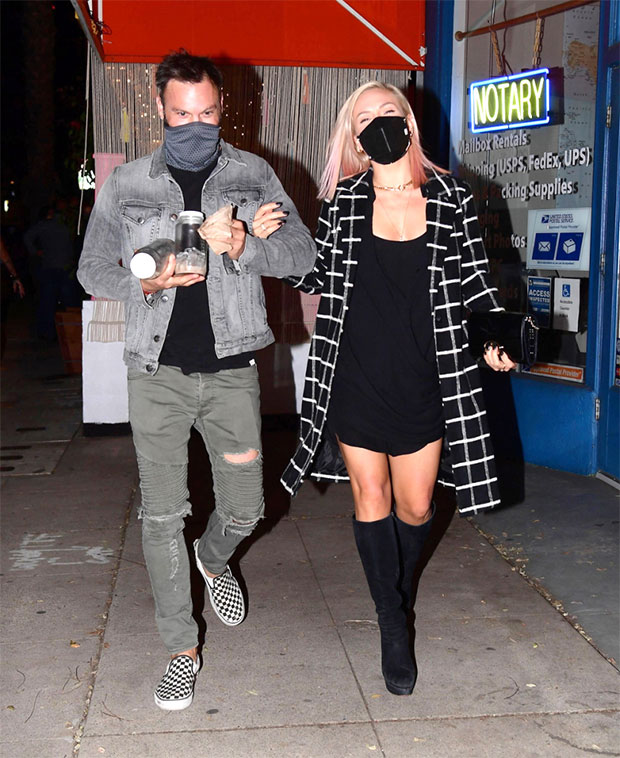 Brian’s latest snapshot featuring Sharna comes four months after they made their relationship Instagram official. The lovebirds have been dating since last year and seem to be getting closer and closer as the romance progresses. A previous source EXCLUSIVELY told HollywoodLife that the Australian dancer is “the real deal” and has helped Brian to “improve his relationship” with Megan, whom he split from sometime between the end of 2019 and Mar. 2020.

“Having Sharna has really enabled Brian to move on from Megan and improve his relationship with Megan even,” the source explained in Apr. “He really hasn’t been this happy in years.” Another insider also EXCLUSIVELY confirmed she had already met his kids around Mar. “Sharna has also met Brian‘s kids,” they said. “They’re official and she’s spending a lot of time at his place in Malibu.”