The news was confirmed on Twitter this morning. Simon McCoy tweeted: “After 18 years.. Last day today.” In recent years, the veteran journalist has become renowned for his sarcastic commentary, witty banter and occasional sighs when reporting on minor stories such as the world dog surfing championships.

Many people took to Twitter to praise the broadcaster and wish him luck in his new role.

One of those was TV critic and broadcaster Scott Bryan who shared a hilarious tribute to McCoy.

The post read: “As @BBCSimonMcCoy has said he is leaving BBC News, here is a thread of his best bits. 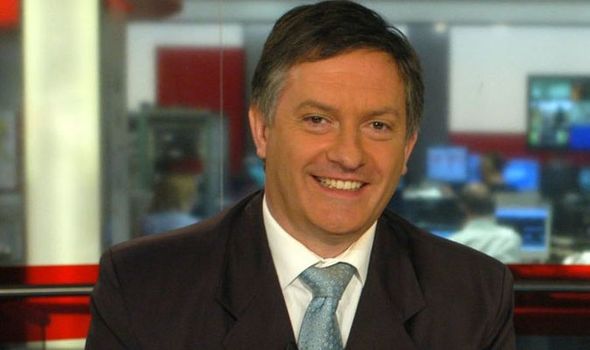 The first video showed McCoy questioning whether the breaking news that the Duke and Duchess were expecting their third child in April was a surprise given that they thought the Duchess was two to three months pregnant in September.

The second video shows Simon McCoy attempting to supress a laugh whilst reporting on a man who plays the piano to monkeys.

In total Scott Bryan shared 13 short clips including the iconic moment McCoy started a news report by holding a packet of photocopier paper rather than an iPad.

And when he reported that The Queen’s garden parties had been cancelled, opening the report with “it may affect you, but it doesn’t affect me”.

Floor manager Niall Jackson wrote: “If you think he’s a handful on-screen, imagine what he’s like off it?

Sam Taylor, Head of Live & Breaking for BBC News said: “Sharp, funny and a great colleague – it has been a delight to have @BBCSimonMcCoy at the helm of the BBC News Channel & BBC News at One.

Newsreader Alex Lovell wrote: “I’m sorry to share this Twitter fam’ but it looks like our amazing, funny and brilliant @BBCSimonMcCoy is leaving the Beeb. Simon, I have the pleasure of calling you a colleague and a friend. You’ll be so missed on the BBC – – good luck with your next adventure.”

Simon McCoy joined the BBC from Sky in 2004.

He is expected to present the News at One for the last time today.