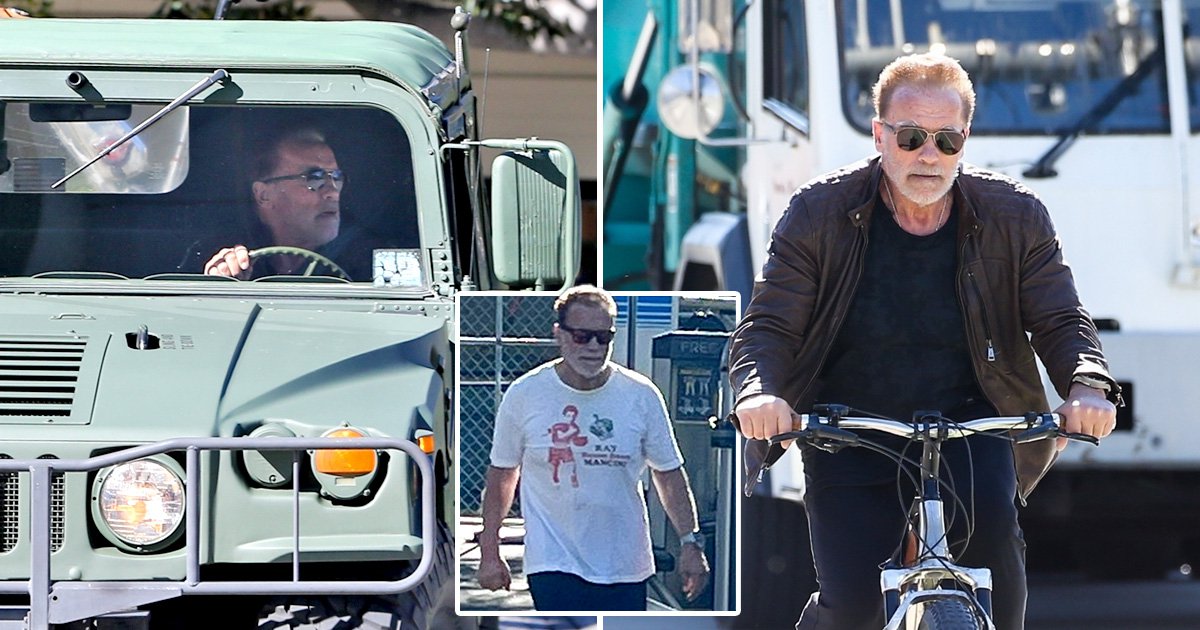 Arnold Schwarzenegger may have been involved in a ‘multi-car crash’ just yesterday, but today he was spotted heading to the gym behind the wheel.

The actor, 74, drove his old hummer after his monstrous SUV collided with a red Prius yesterday afternoon, with his vehicle said to have wound up on top of the Prius.

Later today, he also ventured out for a bike ride in LA to keep up with his fitness regime.

Schwarzenegger was thought to be ‘doing well’ following the crash, with his representatives saying that he was not hurt, and seemed in good spirits as he went about his day wearing casual attire.

The Terminator star was caught up in the horrible accident that reportedly resulted in a woman being hospitalised on Friday afternoon.

The former governor of California was pictured at the scene on Sunset Boulevard in LA where, according to TMZ, he was turning onto the busy street when his car collided with another.

His car is then said to have rolled onto a Porsche that was ‘directly behind’ his vehicle – with an eyewitness telling the publication it ‘looked like a stunt from a movie’.

The Prius driver was reportedly taken to the hospital with head injuries.

Schwarzenegger was seen chatting to bystanders following the incident and his representatives later confirmed to the LA Times that he had just left his home when the accident occurred.

They said that he was not injured and stayed at the scene, also speaking with firefighters and police.

Sources also told TMZ he was worried about the injured driver, and wanted to personally check up on her.

‘There was a collision about 4.35 on Sunset and Allenford Avenue,’ a spokesperson for the LAPD told Metro.co.uk.

‘It was a four vehicle traffic collision (and) fire departments and paramedics transported one female to a local hospital with an abrasion to her head.’

They clarified that ‘neither alcohol nor drugs are suspected as a factor in this and all parties remained at the scene’.

Law enforcement officials are conducting a full investigation into what happened.

The crash came after the Twins actor was hailed a hero when he donated 25 homes to homeless veterans in time for Christmas.

He contributed to the residential structures built for those who served the country, and took time to chat to the new homeowners themselves.

At the end of the year, the star’s divorce from Maria Shriver was also finalised, 10 years after they split.

They were married for 25 years and share four children, settling their divorce in the Superior Court, according to People Magazine.

Maria, 66, initially filed for divorce from the former bodybuilder in July 2011 citing irreconcilable differences, with both since moving on from their marriage.