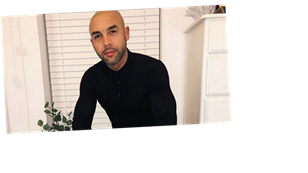 Alex Beresford has liked a cryptic tweet about karma after returning to Good Morning Britain as a presenter.

The 40 year old hosted the show alongside Kate Garraway yesterday, replacing Piers Morgan after they had an explosive on-air argument about Prince Harry and Meghan Markle's "tell all" interview with Oprah Winfrey.

The incident ended in Piers leaving his role as 50 year old Susanna Reid's co-host as he refused to apologise about saying he didn't believe Meghan's comments in the chat, while Alex, 40, carried on with work as usual.

Now, the star has hit the like button under a tweet posted by Maya Jama, which said: "Good things come when you're not a p***k."

Piers slammed the Duchess of Sussex throughout Monday 8 March’s episode of GMB, and claimed he “didn’t believe” any of the claims in her interview with Oprah.

During the candid chat, Meghan claimed that she was refused help by 'the institution' when she revealed she had been suffering with suicidal thoughts.

Reacting to Meghan’s claims, Piers said on GMB: “Who did you go to? What did they say to you?

“The fact she has expressed an onslaught against our Royal Family is contemptible.”

After it was revealed that ITV had spoken to Piers, Piers clarified that his remarks were not aimed at Meghan’s mental health struggle.

He said: “It’s not for me to question, whether she felt suicidal – I wasn’t in her mind and that’s for her to say. My real concern was a disbelief, frankly – and I’m prepared to be proven wrong for this and if I’m wrong then this is a scandal.

“That she went to a senior member of the royal household, told them she was suicidal and was told she couldn’t have any help because it would be a bad look for the family.”

His continuous rants were criticised by his GMB colleague Alex on Tuesday 9 March, which caused Piers to storm off the set.

“Has she said anything about you since she cut you off? I don't think she has, but you continue to trash her…” before Piers cut him off.

Launching out of his seat, Piers said: “Okay, I'm done with this. No, sorry, see you later,” as he walked off set. Hours later, Piers' decision to leave GMB was announced by ITV.

“I’ve had time to reflect on this opinion, and I still don’t. If you did, OK.

“Freedom of speech is a hill I’m happy to die on. Thanks for all the love, and hate. I’m off to spend more time with my opinions.”