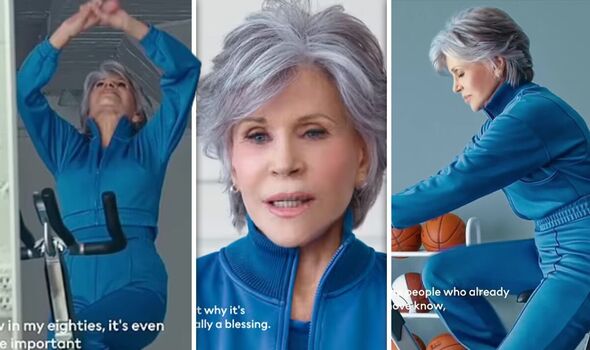 Jane Fonda, 85, looks younger than ever exercising in a tracksuit after positive cancer news

Jane Fonda showed off her ageless appearance as she took to Instagram to share her latest fitness and wellbeing video. The Hollywood star shared her secrets to looking so good at 85 and what she is planning for 2023.

Jane Fonda, 85, took to Instagram to emphasise the importance of fitness and physical wellbeing in a figure-hugging royal blue tracksuit.

She wore a cropped track jacket half-zipped over a sports top and matching high-waisted joggers.

The Hollywood star teamed this with a pair of white trainers before she stretched on a stationary exercise bike.

Jane captioned the Instagram post in view of her 2 million followers: “Movement isn’t just important, it’s a blessing. Let’s move together in 2023.”

This comes as the Grace and Frankie actress recently announced that her cancer was in remission after undergoing treatment for non-Hodgkin’s lymphoma.

Jane Fonda, 85, wore a royal blue cropped track jacket half-zipped over a sports top and matching high-waisted joggers. The Hollywood star teamed this with a pair of white trainers as she sat stationery on an exercise bike.

Jane Fonda showed off her flexibility

Jane Fonda looked great as she showed her flexibility stretching on the exercise bike as she spoke to the camera. She captioned the post: “Movement isn’t just important, it’s a blessing. Let’s move together in 2023.”

Jane Fonda spoke about how we should move every day

Jane Fonda sat down to speak about why making time every day is important for your wellbeing and health. She said: “The people who already move know why it’s not only important but why it’s really a blessing. Now in my eighties, it’s even more important. Suddenly getting in and out of a car is kind of hard unless you have strong thighs. So you do it not because of how you look. You want to be able to live fully.”

Jane Fonda told Elle in a recent interview that she even does her own exercise videos, Jane Fonda Workout, to stay healthy. She said: “It’s still relevant today because it really works. I’m 85 now and I can’t do the full workout per se, but I do the same moves only slower and with less weight, every day. You want to be able to carry your grandchildren. And I can still do that.”

Jane Fonda announced her cancer was in remission recently

Jane Fonda said in her latest health update: “I am feeling so blessed, so fortunate. I thank all of you who prayed and sent good thoughts my way. I am confident that it played a role in the good news. I’m especially happy because while my first four chemo treatments were rather easy for me, only a few days of being tired, the last chemo session was rough and lasted two weeks making it hard to accomplish much of anything.”