Golden voice of the icon who made golf funny: Yes, he was un-PC, but the great Peter Alliss made for joyful listening

The mellifluous, honey-hued tones of Peter Alliss, as warm and welcoming as a Cotswold pub, were the background soundtrack for anybody who has ever taken even the faintest interest in golf.

And in a sport which nowadays seems to be dominated by very rich men wanting to make themselves even richer, Alliss, a leading player himself, was able to conjure up a world of amiable sportsmanship, titanic skills and lovable, larger-than-life characters. He was for sure the voice of golf, but he was also wonderfully funny.

It would be fair to say that there were many aspects of modern life he found exasperating and confusing.

He didn’t get into computers or emails, let alone texts. But he was never a fuddy-duddy, and in a wonderful concluding essay he muses about the contemporary world — its cars, educational problems, TV programmes, not to mention modern golfers, the A303, the need for sound money — with solid common sense that would be welcome these days in Downing Street. 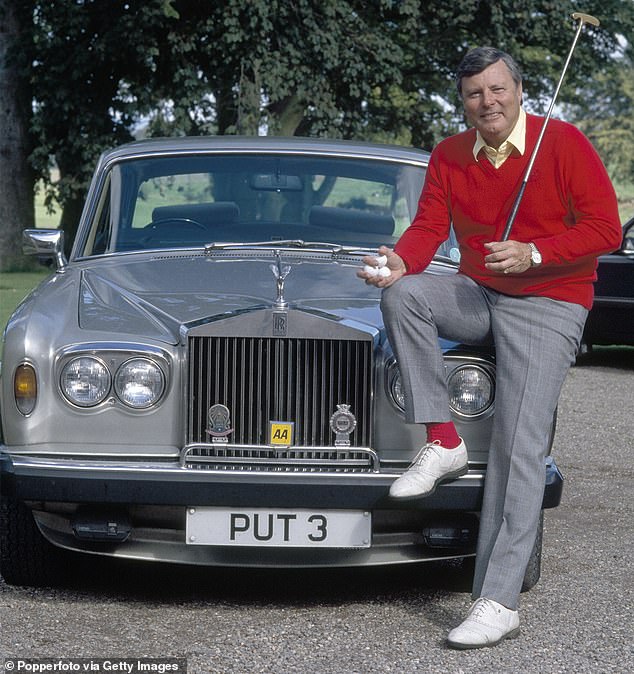 The mellifluous, honey-hued tones of Peter Alliss, as warm and welcoming as a Cotswold pub, were the background soundtrack for anybody who has ever taken even the faintest interest in golf

It’s unlikely, though, that he would ever have been invited to be a visiting professor of feminist studies. In the 2015 Open at St Andrews, he came under fire — fire you suspect he mostly enjoyed — with a comment about the young Irish amateur Paul Dunne, as he was hugged by his mother.

‘Ah that must be his mum,’ said Alliss. ‘Unless perhaps he likes older women. I don’t know; but I hope I got the right one.’ The big row at that tournament came later in the day when the U.S. golfer Zach Johnson was about to hole the winning putt. As he lined up his shot, the camera focused on Kim Barclay, Johnson’s wife. Alliss mused on how the couple would spend the £1.1 million prize money. ‘She is probably thinking, if this goes in I get a new kitchen.’

His remark — in truth pleasant, friendly and if anything a gag about men’s old-fashioned perception of women — brought forth a stream of abuse, to the effect of ‘old-school sexism from Peter Alliss’. The fact that Mrs Johnson was a sociology graduate and chief executive of the couple’s charity foundation made the gag even funnier, though not to some of the more sour-faced critics.

No one who watched it can forget Alliss’s brilliant, agonised commentary when the French golfer Jean Van de Velde squandered a three-shot lead on the final hole at Carnoustie, which eventually cost him the 1999 Open.

His brain clearly frazzled by the occasion, the young Frenchman chose the wrong clubs, hitting the rough, going out of bounds and ending up in the water where, in a moment of madness, he famously took off his shoes and socks and marched into the stream to save giving away a shot. Alliss was stunned and saddened: ‘Would somebody kindly go and stop him?’ he asked. ‘Give him a large brandy and mop him down.’

The last hole seemed interminable and a play-off was to follow. Time was getting on, and like many people, Alliss’s thoughts were turning to dinner. ‘I should have been at home enjoying a glass of malt in anticipation of a nice steak. That’s what came into my head, so that’s what I said,’ he writes in this riotous volume.

Aliss’s commentary on the floundering Van de Velde’s meltdown generated yet another heap of vitriol — proving that even then there was little the public liked more than to take offence. The Daily Record called him a ‘prattling plonker’, while the Daily Mail said he should be sacked, even polling readers on the matter. This hurt Alliss, but the Mail’s chief sports writer Ian Wooldridge rang him to say, ‘Don’t worry about the poll old friend. It’s 8-1 in your favour . . . ‘

Van de Velde, who later did some commentary for the BBC, had nothing but admiration for Alliss. ‘I feel lucky to this day that I have been able to work with and know Peter. He brought joy to millions.’

No one could quarrel with that and this handsome, beautifully illustrated volume will be an indispensable present for anyone who has ever wanted to spend a bit of time with him at the 19th hole.