William Shakespeare painting could be only one in his lifetime 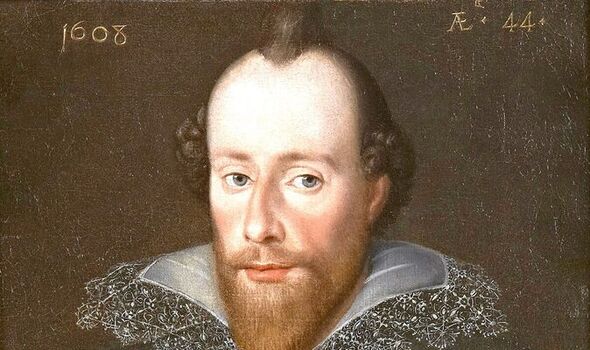 This hidden masterpiece could fetch at least £10million when it goes on the ­market at a private sale, attracting interest from across the globe.

The stunning portrait was by Robert Peake (1551-1619) who was the official painter to James I and is dated 1608 and signed by the artist with his regular mark.

There are at least two artworks confirmed to be of Shakespeare – but both, one an engraving by Martin Droeshout and the other a statue in Stratford-upon-Avon – were made after his death.

This painting has been in the hands of an elderly owner, who wishes to remain anonymous, but hopes it will remain in the UK.

The artwork’s researcher Duncan Phillips, an art and antiques writer, told the Daily Express: “We shall never really know what William Shakespeare looked like.

“But when you look at the evidence of this portrait, it far outweighs any other likeness of him. One historian said if anyone was ever likely to have painted Shakespeare, it was Robert Peake. They worked in the same building and would have known each other well.

“The painting states the sitter in the ­portrait was 44 in 1608, the age Shakespeare was that year. There are many more links. The ­evidence is compelling.”

Prior to 1975, the picture hung in the library of a stately home in the north of England, once home to the Danby family, where it was always known as ‘Shakespeare’ – as is written on its aged frame.

Crucially the age of the mystery sitter is recorded on the portrait as 44. William Shakespeare was 44 in 1608 – while Peake worked in the same premises, and at the same time, where the Bard rehearsed his plays.

Peake was often commissioned by the Office of the Revels, who approved all plays for performing and painted scenery at their building. It was also there where The Comedy of Errors, Romeo and Juliet, Richard II, A Midsummer Night’s Dream, The Merchant of Venice, Much Ado About Nothing, Hamlet, and Macbeth were rehearsed and licensed for performance.

The next link is one print commission by the Peake family in the 1620s was an engraving by artist Martin Droeshout, who created the iconic posthumous image of Shakespeare used on his First Folio of plays of 1623.

That engraving, printed by William Peake, is still used on the cover of books of Shakespeare plays and is the common image of the writer – despite it being made after his death in 1616.

This connects the only verifiable image of Shakespeare – the First Folio engraving – with the Peake portrait.

Mr Phillips, who uncovered the ­connections between Robert Peake, Martin Droeshout and the history of the portrait, added: “There is more evidence for this portrait of Shakespeare than any other known painting of the playwright.

“It is a monogrammed and dated work by a portrait painter of serious status with ­connections to the artist who produced the image for the First Folio.

“The picture has survived 400 years almost untouched by wear and tear thanks to its ownership by a family of Shakespeare ­enthusiasts who hung it in their library.”