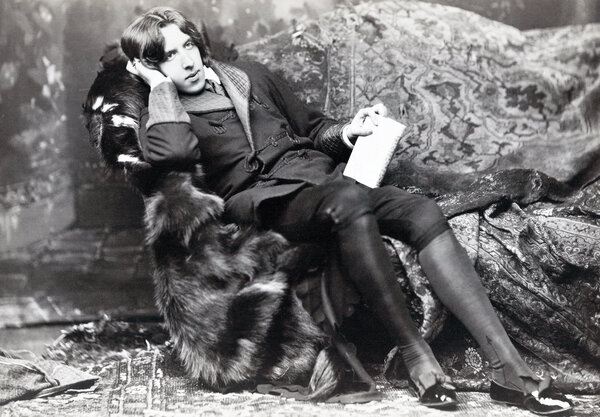 In her new collection of stories, “The Master of Chaos,” the British Guyanese writer Pauline Melville has one of her Georgetown heroes speculate on the difference between chance and fate. “Chance is random. Fate is not. Fate has a plan and fate wins in the end. But chance allows you to think you are escaping fate for a little while.” In trying to tell the story of Oscar Wilde, successive biographers have faced the problem that the impact of Wilde’s downfall is so dramatic and so powerful in its resonance for future generations that it’s hard to avoid writing as if his destiny were preordained, and as if chance had played no part. At the height of his unique fame as a dramatist, Wilde was sent to prison on a charge of gross indecency with rent boys. He then died within a few years of exile at the age of 46. Icarus metaphors abound. In popular myth, Oscar Wilde was always heading toward destruction, and there was nothing much he could do about it.

Matthew Sturgis is a historian, and he believes that with “Oscar Wilde: A Life” he may be able to refresh the narrative by eschewing interpretation. He prefers instead to do what Wilde used to call “grubbing up a lot of musty facts.” The purpose of Sturgis’ exhaustive scholarship is that the prosaic may better inform the poetic. He even stops to tell you the name of the shop where Wilde bought his student glassware, and attention is given to the playwright’s brief, and hitherto unexplored, passion for golf. Clearly, Sturgis is more interested in what Wilde did than in what Wilde means. He wants, he says, to put Wilde back into the 19th century. But his choice of strategy faces a second problem. No writer of English was ever better at acute and devastating self-dramatization than Wilde himself. Sturgis may not want to draw lessons, but Wilde did. Not only did Wilde know better than anyone else what he was up to. He also had a pretty shrewd idea of how everyone else was going to view him.

Born to a prominent, and prominently eccentric, Irish Protestant family in Dublin in 1854, and with a mother, “Speranza,” who had exposed the horrors of the Irish famine and excoriated the British government for its indifference, Wilde arrived with a fully formed and mistrustful attitude to the London society he was so keen to conquer: “Virtue in the English sense … is only caution and hypocrisy.” When, before long, he found himself being criticized on the familiar grounds of being famous for no other reason than being famous, he responded — like Andy Warhol years later — with a benign sweetness and humor that suggested a man who perfectly understood the rules and how to break them. Attacks against him never stuck because he wouldn’t rise to them. When George du Maurier parodied him in a cartoon as the “aesthetic” poet “Jellaby Postlethwaite,” Wilde’s good nature had him offering to sit for the cartoonist, so that he might achieve a better likeness.