When the Pilgrims Met the Native Americans 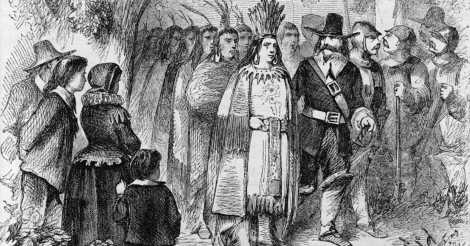 TERROR TO THE WICKED

It’s always about the Pilgrims. Even during the pandemic, the 400th anniversary of the voyage of the Mayflower has been marked with public events, exhibits and academic conferences in England, the Netherlands and the United States. Numerous books have explored new angles on an old story, some of them directing attention to the Native population, the people who inhabited the land they called Dawnland. In “Terror to the Wicked,” Tobey Pearl, a lawyer and educator, focuses on an important episode in the story of colonist-Native relations.

In the summer of 1638 an English indentured servant in the Plymouth Colony, Arthur Peach, ran away from his master. He was joined by three other servants. As they journeyed through the wilderness they encountered a Native whom they attacked and robbed. The Native, Penowanyanquis, though mortally wounded, escaped and was able to tell his tale to Roger Williams in nearby Providence before he died. While one of the runaways escaped, Peach and two of his fellow perpetrators were put on trial in the Plymouth Colony for murder. The English jury convicted all three and they were speedily executed. The story as such is well known and speaks to the willingness of an English jury to provide justice in a case where Englishmen murdered a Native.

Pearl has not unearthed any facts that have not been previously reported in many studies of the Plymouth Colony. She adds conjecture to what the sources actually tell us, with speculation about what Peach and his associates may have been feeling, the possible motivations of major characters and the supposed thoughts of the jurors, to mention just a few examples.

One can’t go beyond one or two pages without encountering something that “may have,” “possibly” or “likely” happened. John Winthrop, governor of Massachusetts, must have been present at the trial and the executions, though there is no evidence that he was. Many pages are devoted to imagining the details of a discussion between Roger Williams and the Wampanoag Massasoit. What sources consider possible, Pearl presents as certainty. For such supposition to be persuasive readers have to be confident in the author’s deep knowledge of the times and culture, but there are too many factual inaccuracies and jumblings of chronology to provide that confidence in this case. An example is the citation of the famous 1670 English trial of William Penn and William Mede that established a jury’s right to act against a judge’s instructions, which Pearl seems to employ to support the independence of the jury in the 1638 Peach trial.

“Terror to the Wicked” is well written and draws upon important new insights into Native culture. But the underlying arguments that this was “America’s first trial by jury” and that it “ended a war” (as the subtitle has it) are misleading. As for being the first trial by jury, Plymouth’s governor William Bradford recorded that in 1630 “John Billington the Elder … was arraigned; and both by grand, and petty jury found guilty of willful murder by plain and notorious evidence. And was for the same accordingly executed.” As for the claim that this trial “ended a war,” the Pequot War was essentially over; churches in Plymouth and other New England colonies had celebrated a day of thanksgiving for their victory 10 months earlier. The Peach trial was important, but Pearl’s reasoning exaggerates how important it was. It was not, as she asserts, “the trial of the century.”