When lunch was long, liquid — and lasted till dinner

When lunch was long, liquid — and lasted till dinner: Fascinating account of the poets, chorus girls and painters who boozed through Soho during the Eighties

SOHO IN THE EIGHTIES

With its 18th-century buildings, street markets, pungent cafes and atmospheric cellar bars, the throng of poets, painters, stagehands and chorus girls, Soho in its prime was London’s most continental and bohemian district.

It was also a sanctuary for absolutely terrible alcoholics.

I’d always regretted that I missed out on Soho’s last gasp, when everybody still boozed at lunchtime, smoked like chimneys and ran up laughable expense accounts. Christopher Howse’s book, however, has put me right: Soho In The Eighties is a glimpse of the hell I’m now mightily grateful I managed to dodge.

Howse, a journalist, has since given up the grog, a rare survivor of a time when drinking was conducted on a suicidal scale. 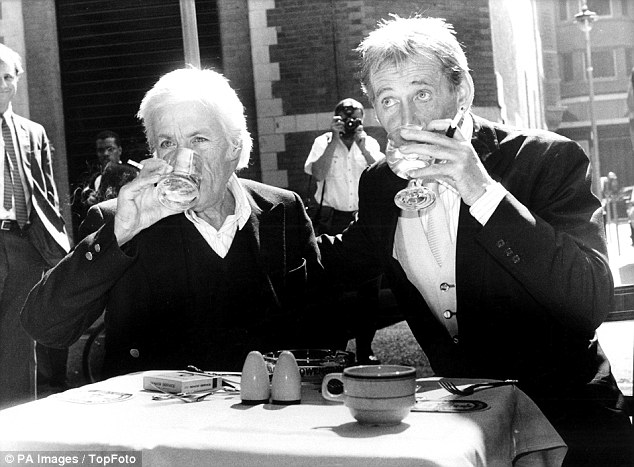 Christopher Howse recalls Soho as London’s bohemian district during the Eighties in a new book. Jeffrey Bernard (pictured left with Peter O’Toole in Soho) would enjoy two bottles of vodka a day during the time in which Soho was a sanctuary for alcoholics

Soho’s drunkest man was Graham Mason, a picture librarian. He complained about the noise made by snowflakes landing on his scalp and once went nine days without food because he lost his shopping.

Actor John Hurt was given to ‘explosive episodes of public drunkenness’. Damien Hirst was ‘wildly and incoherently drunk’. Patrick Caulfield confessed he used unsold canvases to roof a shed, and Francis Bacon explained his loyalty to metropolitan life thus: ‘I wouldn’t like living in the country because of all the horrible little apple trees.’

Spectator columnist Jeffrey Bernard, when Howse knew him, was fading away from diabetes and pancreatitis — the consequence of two bottles of vodka a day.

Nevertheless, he still managed to file his Low Life columns — they were turned into what was essentially a one-man show for Peter O’Toole, who on stage made Bernard more ‘poetic, amused, eloquent and romantic’ than he was in real life.

Bernard and his fellow drinkers were always shouting and swearing and challenging each other, but ferocity would be followed by sentimental reconciliations, alcoholic amnesia and another round of drinks.

How many people enjoy alcohol at lunchtime?

For the drinker, Soho consisted of a small triangle encompassing the Coach And Horses, the French House pub and the Colony Room Club, so newspaper editors knew where to find their convivial feature writers.

The Coach, which resembled ‘an abandoned house in wartime’, was run by Norman Balon, who was proud of the sobriquet, ‘London’s Rudest Landlord’.

Over at the French, so named because it’s where General Charles de Gaulle allegedly sat out World War II, Gaston Berlemont was more diplomatic with customers as he ushered them out of the door. ‘Madame, I look forward to seeing you again — tomorrow,’ he’d say to a legless former starlet.

Presiding at the Colony was Ian Board, the proud possessor of a huge, bulbous strawberry of a nose. He was more forthright: ‘You can’t f***ing paint!’ he told Francis Bacon, hurling him down the stairs and pelting him with plastic biros.

It was also a mistake to ask for a slice of lemon in your gin and tonic. ‘Dirty rotten stinking fruit bobbing around! What’s the point?’ Expletives deleted. 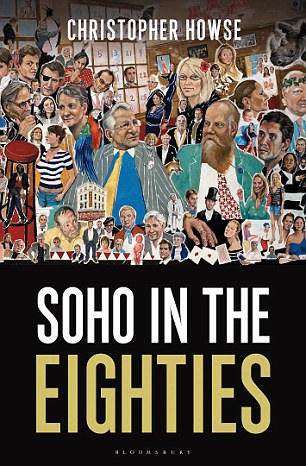 SOHO IN THE EIGHTIES by Christopher Howse (Bloomsbury £20, 266 pp)

Howse does his best to find a nobility in the savagery. He certainly makes the ancient actors, musicians and harlots seem colourful. These are the loners whom Lucian Freud took home to paint, who would earn a pitiful crust setting up and taking down dodgems for a travelling funfair, or drudging as kitchen porters.

Soho In The Eighties is like a prose poem by Philip Larkin, with tales of sickness, poverty and death. Howse says the time was ‘very funny indeed’, but I laughed only once, when reading about the memorial service for a poet which was cut short because the hall had been double-booked ‘for a belly-dancing class’.

What’s come in since is far ghastlier, though. The traditional shops and eateries have gone, pushed out by high business rates and ‘developers’. The pubs are filled with types in suits, blurting into mobile phones.

Conversation has ceased to be. The meaning of Soho came to an end with laptops, soft drinks and a general sanitisation.

There used to be a paradoxical beauty in those infernal bars, as the sun coming in through foggy windows lit up the clouds of tobacco smoke. ‘The insanity was a memory,’ writes Howse, ‘but the history remained.’