What to Expect When You’re Expecting Evil

A few years ago, the novelist Helen Phillips woke up in the middle of the night to the sound of her young daughter’s screams. She rushed to her bedside but was unable to calm her child, who was stuck in a nightmare, crying: “I want Mommy! I want Mommy!”

“It was one of the most terrifying moments of my life,” Phillips said. “It’s a metaphor for motherhood. There’s always going to be things that they’re confronting that you’re powerless against.”

That moment gave rise to one of the more unsettling scenes in her new book, “The Need,” a thriller that explores the psychological, emotional and physical torments of motherhood. The narrative centers on Molly, a sleep-deprived paleobotanist and mother of two young children, whose harried domestic routine is upended one night by an otherworldly intruder. The interloper represents Molly’s worst fear: that something bad will happen to her children.

For Phillips, 37, writing about a supernatural threat felt like the most accurate way to explore the treacherous emotional terrain of motherhood and the lurking feeling that even the most mundane situations are freighted with peril.

“I was trying to evoke the experience of having young children, and apparently that has a lot of elements of horror,” she said. “It’s the best way I can describe to you what it is like for me to be a mother and the kind of anxiety I have.”

“The Need” belongs to a growing body of surreal speculative fiction that uses horror tropes to capture the panic, self-doubt and pressures that new mothers face. The exhaustion that verges on hallucination. The feeling that your body has become a food source and no longer belongs to you. The endless chores and monotony of caring for small children, punctuated by adrenaline spikes that emanate from a constant, creeping dread. What if the fever in the middle of the night is a sign of a life-threatening illness? What if the boiling pasta water falls on the child who’s clinging to your knees while you frantically cook? What if you can’t keep them safe? 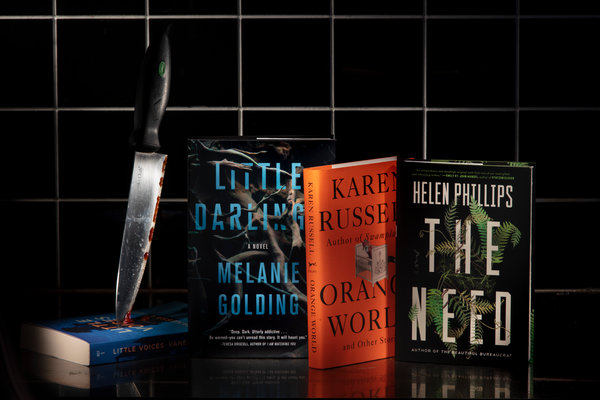 Those fears propel the plots of several new works that feature mothers who fear they are losing their grip on reality — or worse, that their nightmares have manifested.

In Vanessa Lillie’s thriller, “Little Voices,” which Thomas & Mercer will publish this fall, a woman who nearly dies during childbirth from a detached placenta is unable to breastfeed her premature baby and has to pump milk constantly through the night. She begins hearing a menacing voice that makes her feel possessed: “She’ll never sit up or pull up or crawl or walk,” it says. “You were never meant to be a mother.”

“Orange World,” the title story of Karen Russell’s latest collection from Knopf, follows Rae, who makes a deal with a demon to keep her newborn alive. The demon demands to be breastfed every night at 4:44 a.m. Ravaged by sleep deprivation, her nipples raw and achy from feeding her baby and a devil, Rae feels isolated, helpless and slightly crazy. When she attends a new moms support group, after listening to others complain about C-sections and sciatica, Rae struggles to describe her problem, then says, “I’m having a hard time with night feedings.”

Russell began working on “Orange World” two years ago, after her son was born, and started taking notes for the story during those disorienting first weeks with her newborn.

“I had a difficult and at times frightening pregnancy, and there wasn’t public space to be honest about this other side of pregnancy, this unstoppable thing growing inside of your body,” Russell said. “There’s a real primal anxiety over all the ways you feel like you’re failing your kid, like not being able to nurse them adequately.”

A similar mixture of fear, doubt and self-loathing haunts Lauren, the protagonist of Melanie Golding’s debut novel, “Little Darlings,” which was published this spring by Crooked Lane Books. Lauren is recovering from postpartum injuries and worries that she’s unfit to care for her constantly crying twin boys. In the maternity ward one night, she’s confronted by a strange woman wearing rags, who says her own twins are cursed and demands they swap. Later, Lauren becomes convinced her babies were stolen by the woman, an ancient witch, and replaced with look-alikes, and finds her body no longer readily produces milk for the wailing doppelgängers. “Maybe she deserved all of this, for being a bad mother,” Lauren thinks.

Golding, who lives in a small town in Gloucestershire, England, and has two children, now 7 and 9, said her novel was inspired in part by her own difficult experience giving birth, and by European folk tales about changelings, fairy children who are swapped in for human ones. “It seemed to be a really good way of exploring the post-birth experience, which for me was pretty horrific and unexpectedly frightening,” she said.

These stories hinge on age-old anxieties but feel contemporary in their depictions of modern motherhood. Many tackle issues like the physically brutal process of childbirth and nursing, the difficulty of balancing career and child care, the pressure women face to subvert their needs to their offspring, the fear of judgment of their parenting style or lack of one, and the erasure of identity that can come with a new baby.

[ Sign up for the NYT Parenting newsletter for the evidence-based info you need about the horror of motherhood (including night sweats) and more. ]

Children in peril have long been a plot staple in crime fiction and thrillers, and exploring motherhood through the lens of horror isn’t entirely new — classics include Ira Levin’s 1967 best seller, “Rosemary’s Baby.” Horror movies, too, have increasingly focused on domestic dread.

And yet, there still seems to be a paucity of realistic, nuanced depictions of the internal lives of mothers in popular culture. “Why, when there are scores of new books about mothers and mothering and motherhood, does it continue to feel like there aren’t any?” the critic Willa Paskin wrote last year in Slate.

Phillips, who lives in Brooklyn with her husband, the artist Adam Douglas Thompson, and her two children, now 4 and 7, said that in “The Need” she aimed to capture not only the fear she feels as a parent, but the almost equally terrifying ferocity of maternal love. “The love you feel for them is so fraught and intense and visceral and animal,” she said.

She began working on the novel four years ago, but she had the idea for a book about the complexities of motherhood in 2012, when her daughter was born shortly before her older sister died from a rare neurological condition called Rett Syndrome.

“The Need,” which Simon & Schuster will release on Tuesday, grew out of the confluence of those life-altering events and Phillips’s sense that the things she loved and sometimes took for granted could disappear in an instant.

“She wondered if other mothers experienced it, this permanent state of mild panic,” Phillips writes in “The Need.” “What a phenomenon it was to be with her children, to spend every moment so acutely aware of the abyss, the potential injury flickering within each second.”

Alexandra Alter writes about publishing and the literary world. Before joining The Times in 2014, she covered books and culture for The Wall Street Journal. Prior to that, she reported on religion, and the occasional hurricane, for The Miami Herald.