Sloths have not had the best press over the years. How many other mammals can you think of that are directly named after one of the seven deadly sins?

True, sloths don’t actually do very much, other than hang from trees and sleep a lot, but they’re not being lazy — good Lord, no. They’re just being sloths. It’s a tough job, but someone’s got to do it.

William Hartston became fascinated by sloths when he found videos of them on YouTube: ‘Their obvious vulnerability, apparently trusting nature, and mouth set in a permanent smile are irresistible.’ 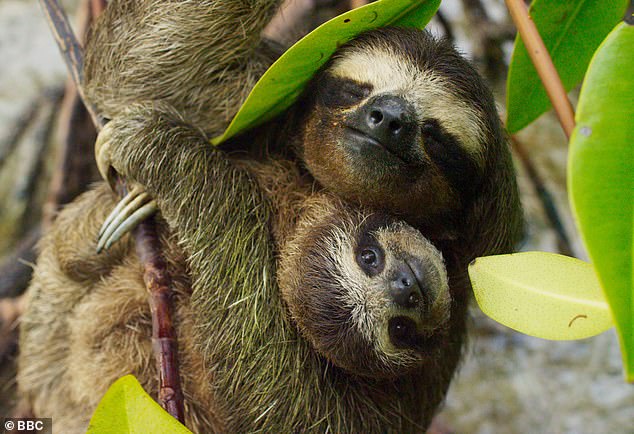 William Hartston explores the history of how sloths have evolved in a new book. Pictured: A female sloth cradles her six-month-old baby

And, becoming slightly obsessed with them, Hartston told a zoologist friend of his that he thought sloths could become the next designer pet. ‘I very much hope not,’ said the zoologist. The sloth, he explained, is perfectly designed for hanging upside-down from trees but, at ground level, its only means of locomotion is to drag itself along with its arms.

It turns out sloths are slightly faster along the ground than snails and slugs, but a race between a sloth and a tortoise would be a close run thing.

As a result, sloths have evolved very long, very sharp claws to defend themselves.

‘I have seen,’ said the zoologist, ‘a photo of the body of a jaguar that had been disembowelled by a sloth.’

Hartston was hooked — and this book is the happy result. For centuries, he writes, the sloth was misunderstood, considered lazy, useless and sloth-like.

In reality, the sloth’s history has been one long success story, because they have been hanging around in trees in Central and South America for millions of years. They eat huge numbers of leaves and have four-part stomachs for digesting them.

And, as Hartston’s photographs show, they are exceptionally lovely to look at.

What’s more, until 2008, none of the research had been carried out on sloths in the wild. At which point, a fearless zoologist climbed trees, edged along branches and attached small devices to the sloths’ heads, with electroencephalograms inside to measure their brain activity.

His first discovery was that sloths in the wild only sleep 9.63 hours out of every 24, rather than the 18 to 20 hours captive sloths tend to spend snoozing. ‘Wild sloths are no sleepyheads after all,’ proclaimed the New Scientist. Sloth studies were transformed overnight. 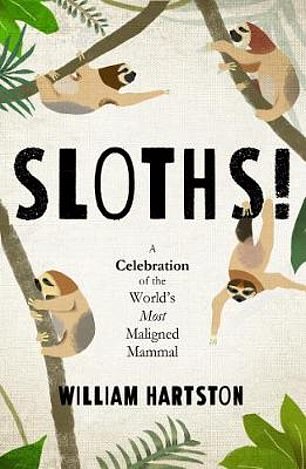 ‘The reasons sloths now seem so weird and so lazy may be the reasons they have survived,’ writes Hartston. ‘As modern research has shown, everything that has puzzled us about sloths for centuries can be explained by their evolutionary quest for energy efficiency.

‘In short, they have become masters of an alternative lifestyle.’

Later studies have established sloth sex lasts seven minutes and that daddy sloth plays no part in the upbringing of the child. Sloths are essentially solitary animals, but courtship rituals do exist — mainly consisting of female sloths whistling in D sharp above middle C.

Hartston writes all this with his customary wit and an obvious joy in discovery. As ever, he finds out the weirdest, unlikeliest things and has to put them in, whether or not they are strictly relevant.

One early pro-sloth scientist was the Reverend William Buckland, a professor of mineralogy at Oxford University and famous eccentric. He was renowned for eating any animal he could get his hands on and said the only thing that tasted worse than a mole was a bluebottle.

Once, when lost in fog on the outskirts of London while riding in a coach, he dismounted, scooped up a handful of earth, tasted it and declared: ‘Uxbridge!’

The sloths, though, are the stars of this book. It will be a long time before I forget the chapter regarding their toilet habits. Let’s just say you don’t want to be walking underneath the two-toed sloth when the time comes, for they can poo up to a third of their body weight.

Another good reason, if you needed one, not to have a sloth hanging from the curtain rail at home.