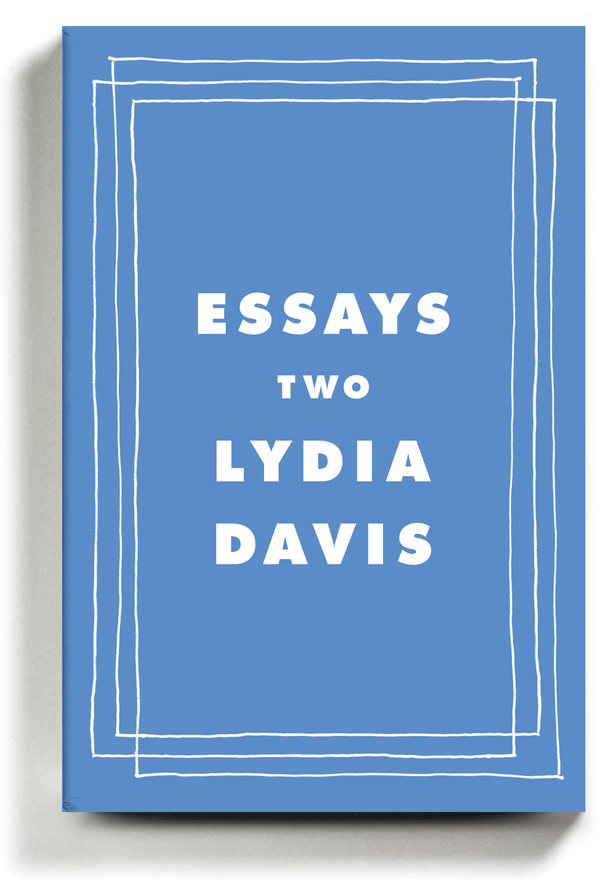 Lydia Davis learned German after being plopped into a classroom in Graz, Austria, at the age of 7. Her immersion began at home with breakfast: If she woke early, she received Schokolade mit Schlag (hot chocolate with whipped cream), and if she slept late she got Schokolade ohne Schlag (no whipped cream). After moving back to the United States not long after, she studied French, Latin and Italian. A lifetime of work as a translator (and novelist and short story writer and essayist) has followed.

Her new book, “Essays Two,” is organized around translation. As Davis points out in a preface, the book is more focused in its material than was her previous collection, “Essays One.” With “Two,” it helps to have a pre-existing interest in translation, or at least a general curiosity about language, whereas to enjoy the earlier collection you needed only a pre-existing interest in “stuff.” But whatever the topic, Davis is always superb company: erudite, adventurous, surprising.

In addition to translating Proust and Flaubert, she has tackled “books of all degrees of excellence and nonexcellence, of interest and no interest” — among them a sentimental biography of Marie Curie, art catalogs, travel essays and histories of China. Whatever the source, Davis finds innumerable joys in its conversion. The first essay here enumerates 21 of these pleasures. Translation, she notes, puts a person in intimate communion with an author, removes the anxiety of invention that attends most writing work and presents eternal (but often solvable) riddles. It also offers a form of hard-core armchair travel: To puzzle through “Madame Bovary” is to shoot through a wormhole from America of the 21st century into France of the 19th.

In an essay about translating Proust’s letters, Davis voyages to the apartment where he wrote much of “In Search of Lost Time.” The apartment has not been maintained as Proust left it, with his furniture and artifacts intact, but has instead become the location of a bank. Davis receives a tour of the writer’s former apartment from an employee who occasionally has to run off and deal with banking questions. Client meetings are held in Proust’s bedroom, and the bank’s waiting room is where the writer once warehoused an unruly pile of inherited possessions. “An imaginative financier with a little information might be haunted, sitting next to the lone potted plant, by the lingering ghostly presence of a crowded accumulation of heavy fin de siècle furniture and bric-a-brac, imbued with Proust’s personal associations,” Davis writes.

Although she learned German by immersion, Davis’s preferred method of language acquisition is quite different, and, to an outside observer, demonically challenging: She finds a book published in a language that she does not fully or even partially understand and then tries to figure out what it means.

To improve her Spanish, she digs into a copy of “Las Aventuras de Tom Sawyer.” In some cases the decryption proves easy. Words like “plan” are the same in English and Spanish. In other cases she inductively reasons the meaning of a word after noticing it in different contexts. Hoja initially stumps her when it pops up in the phrase hoja de papel — “hoja of paper.” Later in the book, it occurs in the context of a tree. Finally, Huck wraps a dry hoja around something to make a cigarette, and Davis realizes that only one meaning would work as well with paper as with a tree or a cigarette: “leaf.” Of course, it would be possible to solve the hoja enigma in two seconds by plugging the word into Google, but that would destroy the fun.

Norwegian is a tougher case. For this, Davis selects a perversely difficult family saga by the writer Dag Solstad. At 426 pages, the novel consists of “almost unbroken blocks, with no chapters and few paragraph breaks.” Davis reads at a snail’s speed with a sharp pencil in hand, scribbling lists of vocabulary. The word sarkastisk (sarcastic) provides her with a trick for unlocking others: If she mentally replaces the k’s with c’s, Davis finds, certain foreign words become more easily deciphered: kusine is now legible as “cousin,” and kom as “come.”

Trying to learn a language from scratch by reading a book is like trying to write a complicated cake recipe by sitting and staring at the finished cake for several hundred hours. Is it the most efficient form of pedagogy? No, but Davis extracts endless thrills from the painstaking process. Her essays do a beautiful job of transmitting that satisfaction to the reader, although I was occasionally tempted to exercise my skimming muscles in places where she dove deep into the weeds. Skimming, however, would be the wrong move in a book that contains an incredible amount of life-enhancing morsels, such as the fact that the sound of a sneeze in Norwegian is spelled atsjoo.

In a piece about the French city of Arles, we learn that Arles not only receives the icy northwesterly mistral wind that is rumored to drive people insane, but that there are old diagrams called “wind roses” that include up to 32 named winds, each blowing from a specific direction. Unless you are a person whose activities heavily involve wind — mariner, surfer, kite enthusiast — it is unlikely that you will have considered such nuances of air movement in your daily life. “Never too soon to start!” you might think, considering whether you might be able to chart a wind rose tailored to your own neighborhood.

Davis’s essays are packed with these windows of opportunity to think more deeply — or at all — about many subjects. Others include paving stones, Gascon folk tales, parataxis, punctuation, cognates, medieval architecture and sheepdogs.

I enjoyed the book’s plenitude so much that I wasn’t distracted by its squat physical shape, which is adorable to hold but designed in such a way that the book tries to flip itself shut as you read. No amount of violent spine-cracking would break the object’s resistance, and around Page 300 I turned a corner and became charmed by its antagonistic construction. I will read you and you will like it, I warned my copy of “Essays Two.” And lo, I liked it, too.