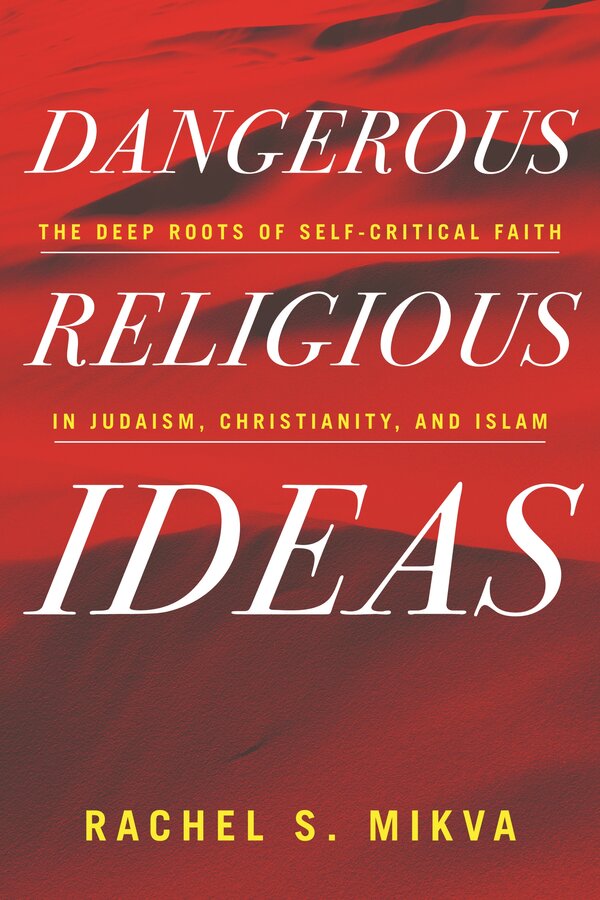 Step aside, New Atheists. Mikva, a Judaic studies scholar, believes that religion can save itself — if it chooses. “Dangerous Religious Ideas” is a sharply researched exploration of what she calls “self-critical faith”: strains of humility and pluralism in the three Abrahamic religions that can serve as antidotes to the excesses — from holy war and fundamentalism to anti-science and bigotry — that give God a bad name.

Mikva is no Pollyanna. Religion is powerful, and dangerous, because of its grip on believers’ innermost ideals and identity. History is replete with demagogues who have co-opted the trappings of faith to cast their amoral politics as the will of God. A primordial impulse to pit a righteous “us” against a demonic “them” makes matters worse, inflaming the sometimes competing claims of Jews, Christians and Muslims to being God’s elect.

Mikva, who calls herself “a committed progressive Jew,” mines sacred texts and centuries of religious thought to show that it didn’t, and doesn’t, have to be this way. Cutting across her sources is a theology of human fallibility: No one should feel sure enough of God’s plan to claim absolute authority for his or her beliefs. A “doctrine of doubt,” Mikva argues, can heighten Scripture’s “constructive force without unleashing its power to oppress and destroy.”

The book’s most radical gesture is its enactment of the change it wants to see in the world. In binding often antagonistic faiths between the covers of a single volume, Mikva shows how pleas from spiritual leaders for restraint, flexibility and self-critique unite the traditions of all three — and, in her view, offer the greatest hope for goodness, healing and justice.

For all its erudition, the book strikes its pithiest note by way of a “Peanuts” cartoon. In it, Charlie Brown tells Snoopy: “I hear you’re writing a book on theology. I hope you have a good title.” Snoopy replies that he’s got a perfect one: “Has It Ever Occurred to You That You Might Be Wrong?” One can almost hear Mikva’s regret that the beagle beat her to it.

HOW GOD BECOMES REAL
Kindling the Presence of Invisible Others
By T. M. Luhrmann

If faith is belief in the intangible, why do the devout so often speak of hearing, seeing and even feeling God? What moves citizens of the scientific age to say they were “slain in the spirit” or “grabbed at their heart” or stopped by a divine voice that says, “Sit and listen”?

For her 2012 book “When God Talks Back,” Luhrmann, a Stanford anthropologist, did fieldwork in churches to understand how American evangelicals develop what they experience as a personal friendship with the Almighty. Her latest, “How God Becomes Real,” is an expansion of that work into a more broadly applicable set of hypotheses. Drawing voraciously on her own and others’ research into faiths as far-flung as Messianic Judaism, the Goddess movement, Indigenous spirituality and Santeria, Luhrmann seeks to map how modern believers make their gods real — how they turn these “invisible others” into confidantes whose presence, however ethereal, feels as close as “your mother’s love.”

Like many scholars of religion, Luhrmann sidesteps the question of whether gods and spirits exist; she restricts her findings, as she delicately puts it, to “the human side of the relationship.” But she spurns easy explanations. Encounters with gods aren’t the stuff of unwitting delusion, she contends, but of a deliberate priming of the mind for transcendent, faith-reinforcing experiences. Her point is that communing with the divine — or convincing yourself that you’re doing so — takes work: a well of sacred stories to make meaning from, an alertness to everyday moments that kindle the spiritual imagination, a talent for blurring “the line between inner mind and outer world.”

Luhrmann marshals social science to argue that people who feel close to a loving god are healthier and happier. But caveats abound: The more people pray to a god they see as judging them — because of, say, their sexuality — “the more psychiatric symptoms they report.” And while belief in a direct line to one’s god can inspire as much inner change as a shrink on speed dial, it isn’t necessarily good for society, she warns, particularly if it gives theological cover to a politics of division.

Drape’s latest is a feel-good account of the campaign to canonize the Rev. Emil Kapaun, a Kansas farmboy turned Army chaplain who died in a Korean prisoner-of-war camp in 1951 after saving the lives of countless soldiers. The book is at its most thrilling in its tales of the priest’s wartime heroics. The pipe-smoking Kapaun dashed through enemy fire to recover the wounded. He stole food and clothes for his men from their Chinese captors. And through his example of self-sacrifice, good humor and unshakable faith, he kept the fires of hope burning among soldiers ravaged by frostbite, dysentery and hunger in a wasteland of subzero temperatures and brutal Maoist indoctrination.

Drape, a New York Times sportswriter, calls his book a “mash-up” of biography, journalism and memoir. But some of his efforts to draw meaningful ties between Kapaun’s life, the vagaries of the Vatican’s saint-making machinery and Drape’s own quest to become a better Catholic feel less than fully realized. Though no fault of the author, the book ends anticlimactically when a key Vatican meeting on Kapaun’s bid for sainthood is canceled because of the coronavirus.

Still, the 21st-century miracles attributed to Kapaun are as apt to inspire the pious as the sausage-making of sainthood is to delight cynics. In a fascinating early chapter, Drape explains how modern popes have effectively lowered the bar for canonization. John Paul II reduced the number of required miracles from four to two and neutered the office of “devil’s advocate,” charged with digging up dirt on would-be saints. He also cut the waiting period for petitions for sainthood from 50 years after a candidate’s death to five. That was still too long for Pope Benedict XVI, who waived it in 2005 to satisfy public demands of “Sainthood Now!” for his predecessor.

Perhaps the highest hurdle these days is monetary: The average campaign for sainthood costs sponsors — including Kapaun’s — more than $500,000. Saint-making “is good for business — fiscally as well as spiritually,” Drape writes. “John Paul II went so far as to say the bar for sainthood could be cleared by all of us.”