SUSAN, LINDA, NINA & COKIE
The Extraordinary Story of the Founding Mothers of NPR
By Lisa Napoli

When Nina Totenberg was a young reporter hustling for bylines in the 1960s, she pitched a story about how college women were procuring the birth control pill.

“Nina, are you a virgin?” her male editor responded. “I can’t let you do this.”

Such were the obstacles that Totenberg and the women journalists of her generation faced, largely relegated to the frivolous “women’s pages” and denied the chance to cover so-called hard news. But as Lisa Napoli’s “Susan, Linda, Nina & Cokie” chronicles, just as some women journalists were suing Newsweek and The New York Times over gender discrimination, in the 1970s, an upstart nonprofit called National Public Radio arrived on the scene offering new opportunities. 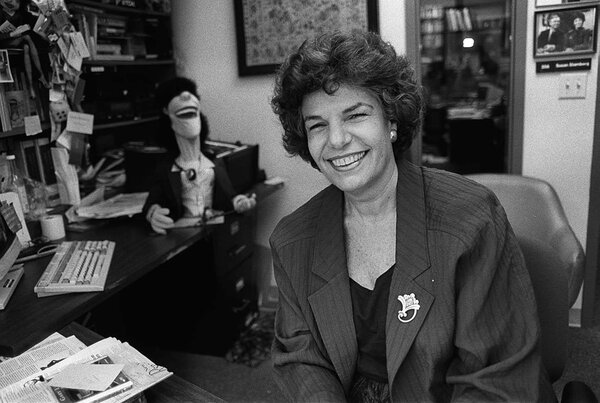 NPR, unlike its well-resourced competitors, was eager to hire sharp, inventive, low-wage workers who couldn’t find jobs anywhere else — in other words, women. That decision launched the star-bright careers of Napoli’s subjects: Susan Stamberg, Linda Wertheimer, Totenberg and Cokie Roberts, and they in turn helped transform NPR from “the nation’s largest unlicensed Montessori school,” as an early study described it, to the vaunted institution it is today. (Finally allowed to do the stories she wanted, Totenberg became an iconic Supreme Court reporter.)

Napoli, herself a reporter for print and radio who has written three other books, illuminates the terrifying, thrilling energy of NPR as start-up: “Not a day would go by without a tape reel being hurled like a Frisbee into the control room at the last minute, or breaking during playback, and it was never quite clear who’d show up for work or whether there’d be enough stories to fill the time.”

The book is a lesson in how the fringe project of one generation becomes the mainstream of the next. Many of us have grown up thinking of NPR as the veteran newsroom, trying to keep up with its shiny podcast rivals, but Napoli portrays the network’s endearingly experimental, chaotic beginning. (The first staff of “All Things Considered” discussed stories sitting on the floor, because they had no furniture). Refreshingly, she also reminds us that some of the debates that have roiled the media in recent years — such as the fear that clickbait will engulf serious journalism — are not new, though the culprit used to be network television, not BuzzFeed.

Napoli clearly admires her subjects, and they come across as trailblazers, but they remain somewhat one-dimensional in the book, never reaching the intimacy of first-name basis that the title promises. We learn the most about Totenberg and Roberts, including an illuminating look at the Democratic political dynasty in which Roberts grew up.

But over all, Napoli takes a “nevertheless, she persisted” approach with the women, largely skimming over their doubts and contradictions in favor of tidy, triumphant narrative arcs. When Stamberg’s husband gets a job in India, forcing her to leave her beloved job in public radio, it’s an “exciting twist.” When two years later her husband decides to transfer back to Washington, “she couldn’t wait to get there.” Wasn’t she annoyed she had to keep picking up her life to follow her husband to his next prestigious job, when she could barely get paid for anything beyond secretarial work?

Throughout the book, I found myself wishing for the gritty details that would make the “founding mothers” less perfect role models, but more interesting characters. When all four finally arrive at NPR, they form a tightknit crew, occupying a corner of the office that a male colleague half-sneeringly calls the “Fallopian Jungle.” Napoli describes them as unerringly supportive and admiring of one another. But were they ever jealous of or angry with one another, too, the first women who made it in a male-dominated world? Did they compete with one another even while holding one another up?

Decades after Totenberg’s pitch about contraception was rejected, she broke the story of the sexual harassment allegations Anita Hill brought against Clarence Thomas. She reflected on it later, summing up her life’s work and that of her women colleagues at NPR.