The Phony War on Drugs 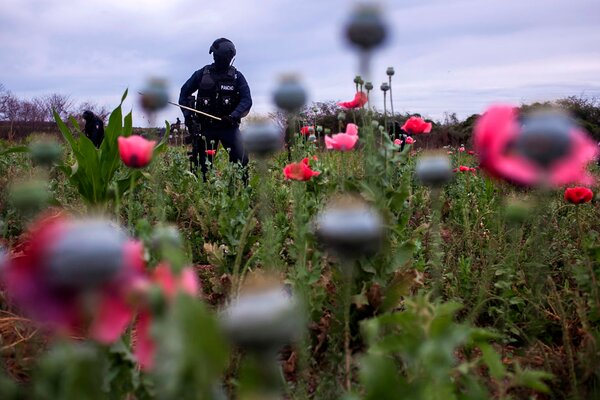 THE DOPE
The Real History of the Mexican Drug Trade
By Benjamin T. Smith

It was a defining moment for the reluctant trinity of North American nations. Poor Mexico — described by the dictator Porfirio Díaz as “so far from God” — was drawing closer to the United States, Canada and the historic free trade deal that its Harvard-educated president was negotiating.

Then, on a Monday afternoon in late spring, 1993, a Mexican cardinal, dressed in clerical robes, a large crucifix hanging from a chain around his neck, was shot 14 times as he got out of his white Grand Marquis at the entrance to the Guadalajara airport. Mexican investigators concluded that the prelate, Juan Jesús Posadas Ocampo, had been caught in a shootout between drug lords, including one named Joaquín Guzmán.

Just two weeks earlier, I had moved to Mexico to work as a foreign correspondent for this newspaper; my principal assignment: covering the upcoming North American Free Trade Agreement and reporting on Mexico’s acceptance into the club of developed nations. The brazen attack lasted only minutes, but it abruptly ended the glowing bonhomie that Mexico had enjoyed until then. Besides introducing “El Chapo” Guzmán to the world, the killing made all of us aware of the terrifying power of the cartels.

The initial investigation into the cardinal’s murder was deeply flawed, and the notion of an unlucky crossfire or mistaken identity gave way to sinister theories involving Mexican officials. It’s unlikely the truth will ever be known, but the nexus between drug traffickers and the government has been laid out convincingly in many journalistic and academic works.

Few have been as chilling as Benjamin T. Smith’s prodigious overview “The Dope: The Real History of the Mexican Drug Trade,” a century-long chronicle crammed with as much violence and mayhem as a Don Winslow border novel. It ditches drama as such and presents the war on drugs in all its grubby, often grisly, detail.

Written with a journalist’s eye and a historian’s perspective, “The Dope” begins with the 1908 arrest in Mexico City of José de Moral, a toothless marijuana wholesaler known as “the King of the Stoners.” It concludes in 2019 with the galling decision by Mexico’s current president, Andrés Manuel López Obrador, to call off soldiers who were about to arrest El Chapo’s son in order to avert an all-out war with the cartels.

In between these nefarious milestones, Smith, a professor of Latin American history at the University of Warwick in Britain, weaves sordid tales of Mexican traffickers, frustrated antidrug crusaders on both sides of the border, and Mexican authorities who tolerated, exploited and protected the narcos.

The way Smith sees it, mythmaking and storytelling have served to “demonize the drug traffickers and cement the narrative of the drug war as a struggle between good and evil.” Despite the inescapable truth that the illicit trade feeds America’s unending demand for narcotics, this portrayal of Mexico has tilted American political realities. “Drug war myths provide the essential background for the upsurge in U.S. nativism,” Smith writes, and with it “the expansion of a massive deportation industry, and the popularity of Trump’s demands for a wall.”

Smith spent nearly a decade panning for truth in the slurry of myth, paranoia and self-aggrandizement that surrounds the Mexican drug trade. He applies what he calls “a persistent cynicism” to calculations of the amount of money and narcotics that cross the border, and he levels with readers about questionable motives that underlie the way such statistics are collected.

He is comfortable telling precartel narco anecdotes that he uncovered in dusty archives, but he skims over some messy details of recent atrocities. For instance, he does not identify Cardinal Posadas by name but refers to the shooting of “the pope’s representative in Mexico,” apparently confusing the cardinal with Geronimo Prigione, the papal nuncio whom Posadas was reportedly meeting the day he was killed.

Smith makes a strong case that the awful escalation of violence is “not so much in the DNA of trading in narcotics as in the DNA of prohibiting the trade.” For decades, Mexican authorities treated narcotics as a source of revenue. As early as 1915, Esteban Cantú, the appointed governor of Baja California, collected a 3.5 peso tax on every kilogram of opium imported from China and demanded a share of protection racket payments, using the money to build roads, parks and a functioning postal service.

Such a morally questionable approach was considered justifiable because, until recently, Mexico had no drug-addiction problem of its own. So long as the drugs went north, what was the harm? In the 1940s, freethinkers got the Mexican government to experiment with legalizing marijuana and permitting dispensaries to give addicts morphine, until the United States quickly forced a reversal.

But as profits increased, competition for protection schemes intensified and eventually engulfed the federal government. The corruption and violence described in the book’s final section, “Into the Abyss, 1990-2020,” is apocalyptic. By early 1997, even the Mexican Army general in charge of the nation’s war on drugs was taking payments to protect the cartels.

It didn’t stop there. The biggest drug lords now run their own rackets, unleashing their armed wings against opposing gangs that try to muscle in on their territories. Mexico’s murder rate more than doubled during the tough-on-drugs presidency of Felipe Calderón. The cartels spread their infection to car theft rings, kidnappers and illegal loggers, and then demanded protection payments from legitimate businesses. They even stalked Mexican elective politics. Just this past June, 35 candidates for local office were killed as cartels ensured that their own candidates won.

Smith ends not with policy recommendations but with the bleakest of predictions: “A century and counting, the Mexican drug trade shows no signs of slowing.”