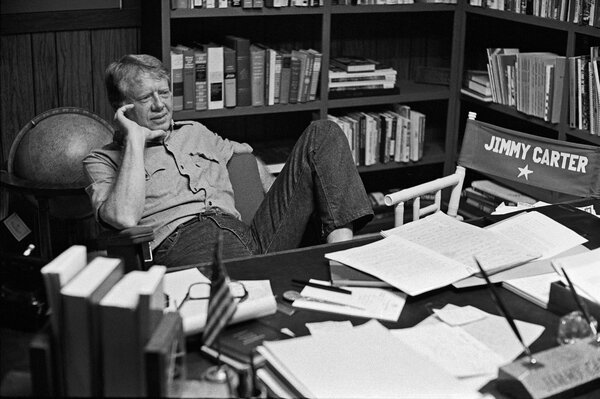 THE OUTLIER
The Unfinished Presidency of Jimmy Carter
By Kai Bird

Kai Bird’s landmark presidential biography of our 39th president, “The Outlier,” begins, almost lyrically, by recreating the world in which Jimmy Carter grew up. Born in 1924 to Earl and Lillian Carter, virtually the only landowning family in Archery, Ga. (Plains, more famous as Carter’s hometown, is 2.5 miles away), Jimmy Carter certainly enjoyed status despite living in what many Americans would consider poverty. The Carters were the only white family in town. Most of the population of 200 consisted of Earl’s Black tenants. Although considered well off in the rural South of the first decades of the 20th century, the family didn’t have running water until Carter was 11 and didn’t get electricity until three years later. “The greatest day in my life was not being inaugurated president, [and] it wasn’t even marrying Rosalynn — it was when they turned the electricity on,” Carter later recalled.