The Greatest Composers Ever

In 2011, Anthony Tommasini, the chief classical music critic of The New York Times, launched a Top 10 Composers project with a series of articles voicing his picks and inviting readers to comment. There was considerable response, many welcoming the discussion, some issuing warnings (“Don’t you dare leave off Mahler!”), and others scorning the whole notion of ranking composers. Out of that project came the current book, in which Tommasini cheerfully acknowledges the problematic nature of canon formation, especially in a field like classical music where the standard repertory can become ossified. Nevertheless, he defends the value of distinguishing the great from the merely good.

He has expanded his list of indispensable composers from 10 to 17, all, it seems safe to say, unarguably great: Monteverdi, Bach, Handel, Haydn, Mozart, Beethoven, Schubert, Chopin, Schumann, Verdi, Wagner, Brahms, Puccini, Debussy, Stravinsky, Schoenberg and Bartok. While I would quarrel with omissions like Mahler, Vivaldi, Liszt, Janacek, Mussorgsky, Berg, Shostakovich, it would be wrong to assume Tommasini disparages those left out of his top 17. In newspaper reviews he has continually shown open-mindedness toward all kinds of music, and “The Indispensable Composers” is sprinkled with admiration for Grieg, Berg, Britten and others who did not make the cut. The point is not to get stuck arguing over his choices, but to accept the book as a vehicle for a writer of immense musical knowledge to share his insights about many favorite pieces. “I … take the educational component of being a music critic seriously,” he writes. The results should be seen in somewhat the same democratically pedagogic spirit as his hero Leonard Bernstein’s televised lectures. 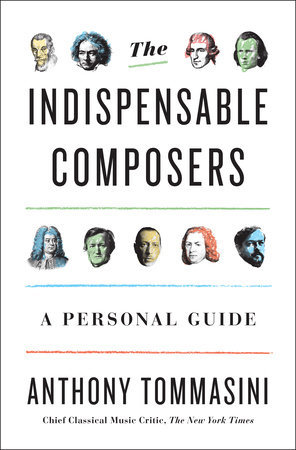 Each chapter starts out with an attempt to convey the composer’s main contribution to the history of music, before segueing to the man’s (they are all male, Tommasini notes apologetically) biography. To avoid dryness, he will tell lively anecdotes about the artist’s romantic life, financial struggles or initial failure to win over critics. He is also interested in communicating with readers who may know little about classical music: Employing a conversational, user-friendly writing style, he will stop to explain a technical term of theory before moving on. Music is notoriously difficult to write about — how to convey changes in a composition, both formal and expressive, using words instead of sounds? Tommasini does a fine job of conveying the inner life of a piece, through his rhythmic sentences and sculpted paragraphs. Even when a novice may find it hard to follow his analysis, one is carried forward by the gusto of his prose.

Some critics are energized by ambivalence; others, by rapture. Tommasini is an enthusiast. Generosity and admiration steer him in these pages. Of course, one wouldn’t expect to hear much negativity expressed for subjects he has preselected as great; but in general, impassioned appreciation gets him going. The book’s subtitle is “A Personal Guide,” and both terms apply. He is warmly open about his preferences, beginning many sentences with “I love …” or “This piece has a personal significance for me. …” He usually roots his emotional connection with a piece of music to his first encounter with it in boyhood or adolescence, when taste crystallization is most susceptible. A trained pianist, he recalls playing this or that piece at a recital, or being stunned when introduced to it as a Yale undergraduate. So many autobiographical references proliferate that the book feels at times like a memoir in disguise, but one that centers on the formative years. About relinquishing a Beethoven standard, he says: “My struggles to play the ‘Pathétique’ must have become associated in my mind with enduring adolescence. I think I had been too emotionally entangled with that sonata to keep playing it.” Or: “There I was, just turned 22, still sorting out being gay, full of longings, including for a few friends sitting in the first row at this recital. Chopin allowed me no secrets when I played his ballade.”

The advantage of these asides is that the book feels appealingly human, not like a textbook written by committee. Tommasini’s lifelong concertgoing experience also allows him to supply a wealth of examples about performers’ approaches to the music under discussion, such as hearing in awe Rudolf Serkin play Beethoven or Renata Tebaldi sing Desdemona. If there is an imbalance, it comes from over-privileging the romantic, sublime element — not the only way to appreciate classical music. He leans heavily on words like “spiritual,” “mystical,” “cosmic,” without ever defining what he means by them. He’s on firmer ground describing the formal structure of a piece. Given his background, he is admittedly partial to composers’ piano compositions, which he discusses with subtle expertise.

Tommasini’s judgments strike me as invariably sound, even when I initially resist them. For instance, he defends opera productions that employ updated staging. He makes short shrift of intellectual condescension toward Puccini, and of serialist composers’ snobbish disdain for tonal pieces. “I have never quite bought into the concept of music as an art form that advanced over time to increasingly higher levels of modernity and sophistication. Of course, bold, radical innovations kept coming, but these shifts did not necessarily make music any greater, just different.” Agreed.

One of his previous books celebrated Virgil Thomson, the composer-critic who was also a superb literary stylist. (See his two-volume Library of America set.) As a writer, Tommasini is not on that level: His prose is journalistically appropriate, readable, but can sometimes seem too chatty and breezy for a bound volume, as when he employs the figure “nyah-nyah” to describe Debussy thumbing his nose at Wagner. Still, the book makes no belletristic claims; it’s intended solely as a guide, and as such, perfectly fulfills its aim. One cannot help coming away from it with a more rounded understanding of classical music at its peak. Maybe he can follow it up with a book dedicated to “Not Quite Indispensable Composers but Pretty Terrific Nevertheless” (Mahler, please?).

Phillip Lopate, a professor at Columbia University, is the author, most recently, of “A Mother’s Tale” and “To Show and to Tell.”