Yuval Taylor’s “Zora and Langston: A Story of Friendship and Betrayal” is an overdue study of the famous yet underdiscussed friendship and literary collaboration between Zora Neale Hurston and Langston Hughes. “It is so easy to see how and why they would love each other,” the epigraph, taken from a 1989 essay by Alice Walker, reads. “Each was to the other an affirming example of what black people could be like: wild, crazy, creative, spontaneous, at ease with who they are, and funny. A lot of attention has been given to their breakup … but very little to the pleasure Zora and Langston must have felt in each other’s company.”

That final line encapsulates Taylor’s ambitious project. The dramatic fallout between Hurston and Hughes, triggered by their collaboration on the ill-fated and controversial play “Mule Bone,” has been fetishized in literary circles for its dramatic nature. Stories of their heated fights, rumors of a love triangle involving their typist, Louise Thompson, and the involvement of lawyers have all made the rounds. Consequently, the qualities that initially drew these artists together — their shared sense of mission and pride in ordinary black people — have long been overlooked. “Zora and Langston” refocuses our attention on the positive aspects of their relationship, while doing its best to explain — through historical records and firsthand research — what really brought their friendship to an end.

In July 1927, Hurston and Hughes embarked on a tour of the Deep South — part business, part pleasure — which began with a chance meeting in downtown Mobile, Ala., where the two ran into each other outside the train station. Hurston was there to interview Cudjo Lewis, the last living former slave born in Africa; Hughes was giving readings and performing his own research. Hughes, a Northerner, was out of his element, while the Alabama-born and Florida-bred Hurston was firmly in hers, traveling with a gun in her shoulder holster. On this trip, Hughes and Hurston grew conscious of their shared interest in black folklore and everyday people, and their pronounced taste for adventure. This chance encounter kicks off the book’s most exciting chapter, imbued with the “pleasure” Hurston and Hughes inspired in each other.

Soon after their meeting, the book describes the pair enjoying a meal of fried fish and watermelon. While most black people would have recoiled at such a meal because of its evocation of racial stereotypes, Hurston and Hughes reveled in defying such expectations. They visited Booker T. Washington’s Tuskegee University, where the only surviving photographs of Hughes and Hurston together were taken, the pair smiling on campus and looking impossibly young and carefree — a highlight of the book’s somewhat anemic visual offerings.

Charlotte Osgood Mason, a white Manhattan socialite and philanthropist who took on both Hughes and Hurston as a patron at nascent points in their careers, was a central figure in both their friendship and their subsequent estrangement. Mason was introduced to both artists by the academic Alain Locke, whose 1925 anthology “The New Negro” defined the Harlem Renaissance and cemented his position as its “dean.” Locke was gay but in the closet, and he and Hughes entered into a correspondence that culminated in Locke showing up at Hughes’s flat in Paris. Nothing happened — Locke’s infatuation was probably only semi-requited — but he nonetheless ensured Mason’s patronage of Hughes, and Hughes, in turn, recommended Hurston to Mason. 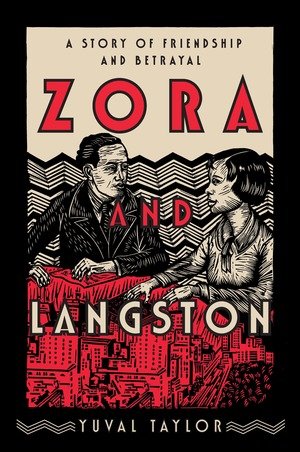 Mason was a major collector of African art who espoused primitivist views — in vogue at the time— to an uncomfortable degree. She believed African-Americans and Native Americans were “younger races unspoiled by white civilization.”Her philanthropy was fueled by the idea that American culture could be re-energized by exposing it to these “primitive” ones. True to her views, Mason demanded complete devotion from her Negro clients, who she insisted call her “godmother.” Mason provided Hughes and Hurston with generous monthly stipends, but consequently considered Hurston’s work her property. Hurston wasn’t even allowed to show anyone her work without Mason’s permission. Surprisingly, Hughes was the first to break ties with Mason, while Hurston remained on friendly terms with Mason for most of the rest of the elder woman’s life.

Mason’s stewardship is one of the most glaring and fascinating contradictions in “Zora and Langston,” simultaneously echoing those at the heart of both writers’ legacies. Although demeaning, Mason’s patronage allowed Hurston and Hughes to produce some of their most enduring works. It also sustained them through low points in their careers, as well as through the Great Depression, when many of their confreres drifted into obscurity.

Chief among the book’s strengths is that it does not shy away from pointing out similar contradictions in the relationship at its heart. While that eventually reached an explosive end, Hurston and Hughes shared many years of peaceful and rewarding friendship. The book presents several possible explanations for their falling-out: Hurston’s jealousy (whether romantic or platonic remains unclear) of the relationship between Hughes and Thompson, the beautiful, young aspiring writer hired by Mason to be their secretary; disagreements over the authorship of “Mule Bone” (Taylor, a book editor and the author of “Darkest America: Black Minstrelsy From Slavery to Hip Hop” and “Faking It: The Quest for Authenticity in Popular Music,” sides with Hurston, who claimed to be the play’s principal author); and miscommunication caused by delays in correspondence.

The book also reproduces the admiring letters Hurston and Hughes sent to their “godmother,” whose fawning obsequiousness is enough to make one’s skin crawl. At key moments throughout the book, Taylor takes care to remind his readers that although both writers were pioneers who brought blackness into the literary canon, they simultaneously contributed to the adoption of negative stereotypes about African-Americans. Unfortunately, this idea appears reinforced by their long, mostly subservient relationship with Mason.

During their tour of the Deep South, Hurston and Hughes visited the family plantation of the Harlem Renaissance poet Jean Toomer. There they met one of Toomer’s distant relatives, who reminded Hughes (as he later recalled in his autobiography) of Uncle Remus, the folk character once used to justify the practice of slavery. Hughes became enamored of the man’s hat and, in the end, Hurston paid $3 to keep it. The Remus story is one of several revelatory details Taylor highlights in his layered portrait of these two artists. As Taylor correctly concludes, Hurston and Hughes were the first American writers to create great bodies of work that were unmistakably — and proudly — black. The corpus of African-American literature that has grown in their wake owes them a great deal.

However, their delight in the concept of blackness could occasionally veer into the exploitative, sometimes propagating negative stereotypes of black people. Their legacies should account for both tendencies, and the greatest feat of “Zora and Langston” perhaps lies in Taylor’s loving yet evenhanded portraits of both figures. There are times when Taylor tries to be too balanced. After all, Hurston famously expressed troubling political views, including her insouciant Red-baiting and her critique of the 1954 Brown v. Board of Education decision. Taylor largely excuses these, attributing the backlash Hurston received to her unpopularity with the more politically engaged writers of the era. He meanwhile draws a false equivalency with Hughes’s and Hurston’s attitudes toward whites. All of this is belied by much of the evidence presented in the book itself. And, not to mention, Taylor’s analysis would also surely have benefited from a more probing critique of the sexism inherent in Hurston’s reception during her lifetime.

None of these minor flaws detract from the book’s overall achievement. It is a highly readable account of one of the most compelling and consequential relationships in black literary history, and the time is ripe for this story to reach a new generation of readers.

Zinzi Clemmons is the author of “What We Lose.”