Are you completely swept away by the medieval fantasy world of Amazon Prime’s The Wheel of Time? The latest in a series of series that want what Game of Thrones has, the show already has a lot of fans thanks to the OG books that came out in the ’90s and ’00s. Seriously, like, am I not the only one who has noticed Wheel of Time fans coming out of the woodwork in anticipation of the series adaptation??

I, for one, would like to learn more—so here’s everything you need to know about The Wheel of Time books by Robert Jordan, and his sometimes co-author Brandon Sanderson, including what order to read them in when you get started. 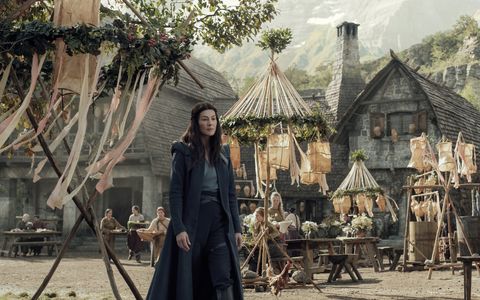 If you’ve stumbled here without having checked the show out yet (hi!), it’s about a group of five potential Chosen Ones training to take down the Big Bad. It’s like Harry Potter meets The Hunger Games—only published way before either of those franchises were a thing.

If you’re intrigued by the show and have been itching for a new fantasy series to read, I’ve got great news for you. There are a lot of books in this series. And not to shade Game of Thrones or anything, but this series is actually finished! If The Wheel of Time gets renewed for more seasons, they aren’t in danger of the show catching up to the books ending. It’s done. It’s published. Book readers know pretty much everything that’s gonna happen.

Want to join them? These are all of the books in The Wheel of Time series in the order they were released:

New Spring, the eleventh book in the series, is a prequel set 20 years before the events of The Eye of the World. Other than that, they take place in the same order they were released.

Soooo where should I start??

If you wanted to be really extra, you could start with the prequel then read them in chronological order. It actually might help if you’re following along with the Amazon Prime series adaptation of The Wheel of Time, since season 1 adapts characters and storylines from both the first book in the series and the prequel.

Most of the time, I tend to recommend reading and watching things in release order, because that’s how most fans experienced the thing, but if you’re anxious to learn as much as you can about the show, chronological is the way to go.

Happy reading! Nothing goes better with cold weather than a good fantasy series with lots of magic and swooping capes that goes on forever. This new obsession really couldn’t come at a more perfect time.