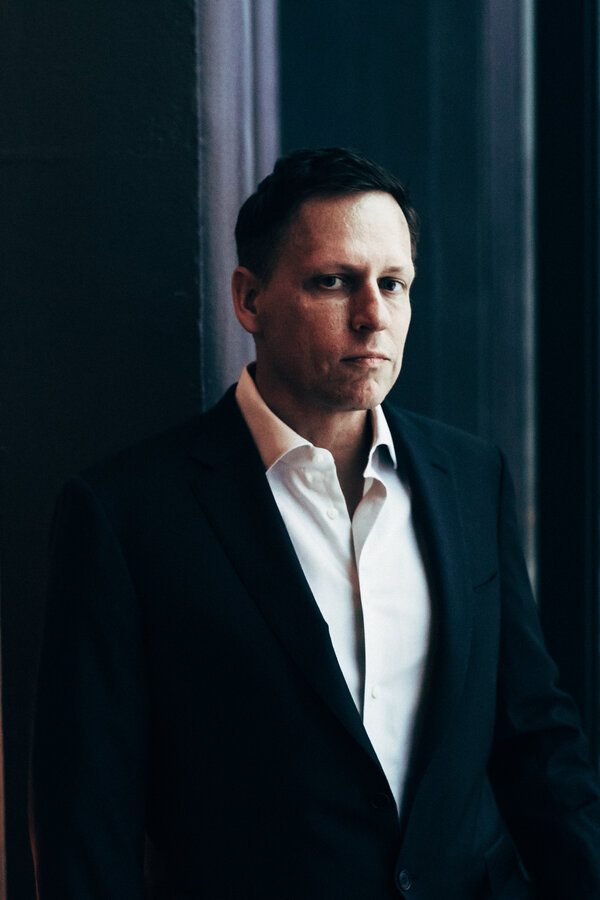 A few years ago, on a podcast called “This Is Actually Happening,” a penitent white supremacist recalled a formative childhood experience. One night his mother asked him: “You enjoying your burger?” She went on, “Did you know it’s made out of a cow?”

“Everything living dies,” she said. “You’re going to die.”

Plagued thereafter by terror of death, the boy affected a fear-concealing swagger, which eventually became a fascist swagger.

By chance, I’d just heard this episode when I opened “The Contrarian,” Max Chafkin’s sharp and disturbing biography of the Silicon Valley tech billionaire Peter Thiel, another far-right figure, though unrepentant.

An epiphany from Thiel’s childhood sounded familiar. When he was 3, according to Chafkin, Thiel asked his father about a rug, which his father, Klaus Thiel, explained was cowhide. “Death happens to all animals. All people,” Klaus said. “It will happen to me one day. It will happen to you.”

A near identical far-right coming-of-age tale — a Rechtsextremebildungsroman? The coincidence kicked off a wave of despair that crashed over me as I read Chafkin’s book. Where did these far-right Americans, powerful and not, ashamed and proud, come from? Why does a stock lecture about mortality lead some 3-to-5-year-old boys to develop contempt for the frailties in themselves — and in everyone else? Like the anonymous white supremacist, Thiel never recovered from bummer death news, and, according to Chafkin, still returns compulsively to “the brutal finality of the thing.” Thiel also turned to swaggering and, later, an evolving, sometimes contradictory, hodgepodge of libertarian and authoritarian beliefs.

Thiel stalks through Chafkin’s biography “as if braced for a collision,” spoiling for a fight with whomever he designates a “liberal” — meaning anyone he suspects of snubbing him. Unsmiling, solipsistic and at pains to conceal his forever wounded vanity, Thiel in Chafkin’s telling comes across as singularly disagreeable, which is evidently the secret to both his worldly successes and his moral failures.

Young Thiel had the usual dandruff-club hobbies: He played Dungeons & Dragons, read Tolkien and aced the SATs. He was arrogant, and set his worldview against those who mocked him for it. One of Thiel’s classmates at Stanford told Chafkin, “He viewed liberals through a lens as people who were not nice to him.” Looking back on Thiel’s anti-elitist and eventually illiberal politics, Chafkin is succinct: “He’d chosen to reject those who’d rejected him.”

Chafkin serves as a tour guide to the ideological roadhouses where Thiel threw back shots of ultraconservative nostrums on his way to serve Donald Trump in 2016. There was his home life, where — first in Cleveland, then in South Africa and, finally, in suburban California — he ingested his German family’s complicity in apartheid (his father helped build a uranium mine in the Namib desert) and enthusiasm for Reagan; his requisite enlightenment via the novels of Ayn Rand; his excoriations of libs at Stanford, which (Chafkin reminds readers) still shows the influence of its eugenicist founding president, David Starr Jordan; and his depressing stint at a white-shoe corporate law firm, where he was disappointed to find “no liberals to fight.”

These stages of the cross led Thiel to Silicon Valley in the mid-1990s, hot to leave big law and gamble on young Randian Übermenschen. An early bet on a coder named Max Levchin hit it big. The two devised PayPal, the company Thiel is famous for, which supercharged his antipathies with capital. Thiel, who’d published a book called “The Diversity Myth,” “made good on his aversion to multiculturalism,” Chafkin writes. “Besides youth, PayPal’s other defining quality was its white maleness.”