The Alarming Human Toll of Cheap Stuff ‘Made in China’

MADE IN CHINA
A Prisoner, an SOS Letter, and the Hidden Cost of America’s Cheap Goods
By Amelia Pang

Five chapters into “Made in China,” Amelia Pang’s investigation of forced labor practices in China, her main subject — a Falun Gong practitioner named Sun Yi — is tasked with making decorative paper mushrooms for export, it is rumored, to Europe. It is early during his stay in a forced labor camp called Masanjia, and the assignment is supposed to be a cushy one. How difficult can it be to make paper mushrooms? Sun, however, soon scrapes his fingers rubbing the paper together to get the desired fake-mushroom feel. His cuts grow infected, but he keeps working, trying to fill an impossible quota of 160 mushrooms per day. Other inmates steal mushrooms from one another in desperation, growing thin on a diet of poisonous-smelling vegetable soup. “Sun regularly slept just two to four hours,” Pang writes. “Only to dream of the repetitive creasing motions of folding paper mushrooms.”

In the aftermath of 2020 — a year that saw both the expansion of a vast detention and forced labor system in the western Chinese province of Xinjiang and a homebound global population increasingly reliant on goods delivered anonymously to their doorstep — Pang’s book feels timely and urgent. Her argument starts here, in the room with the mushrooms, and goes like this: that the way we consume is unsustainable; that something as seemingly trivial as paper mushrooms and Halloween decorations are entangled in a system that hides atrocity by design and makes complicity — with authoritarian governments, with dangerous working conditions and even with religious persecution — part of modern life. Pang, a freelance journalist who grew up in a Mandarin-speaking household, is most effective when she is drawing out these juxtapositions, putting production and torture matter-of-factly side by side.

“Made in China” gets off to a rocky start; Pang does not hit her stride until a few chapters in. She opens the book with a mystery, involving the discovery, by a woman living in the suburbs of Portland, Ore., of a note that Sun Yi hid in a package of Halloween decorations headed to the United States. The woman opens the package, the note falls out and, it seems, the hunt is on. “If you occasionally buy this product, please kindly resend this letter to the World Human Right Organization,” the note read, in English.

Identifying Sun Yi, however, turns out not to be much of a puzzle. He had been released from Masanjia in 2010, two years before his letter was discovered, well before Pang began researching his case. In fact, he was the subject of a 2018 documentary, “Letter From Masanjia.” This opening conceit dissolves quickly and the early pages of Pang’s book race through Sun’s childhood and, at the same time, survey decades of Chinese history in passages that are sometimes sweeping and reductive. “The Cultural Revolution killed millions and mangled China’s economy,” she writes. “This is why modern mainland Chinese ideals tend to place higher value on social stability than human rights.”

Once she has dispensed with this preamble, and Sun Yi arrives in Masanjia, Pang’s narrative slows down and her argument starts to take shape. She details the living conditions and social hierarchy within the prison, the grueling work and rumors about a shadowy “ghost” unit. And, outside the prison, Pang is a dogged investigator. She follows trucks from reform-through-labor prisons near Shanghai to the factories that dot the surrounding region. Pang talks to activists and laborers, combing through Chinese media accounts, and making a convincing case that brands from H&M to AmericanGirl have reaped the benefits of cheap laogai, or forced labor. Supply chains and corporate malfeasance are not only to blame, she contends; our own consumption patterns contribute to the system that had Sun working endlessly and against his will. 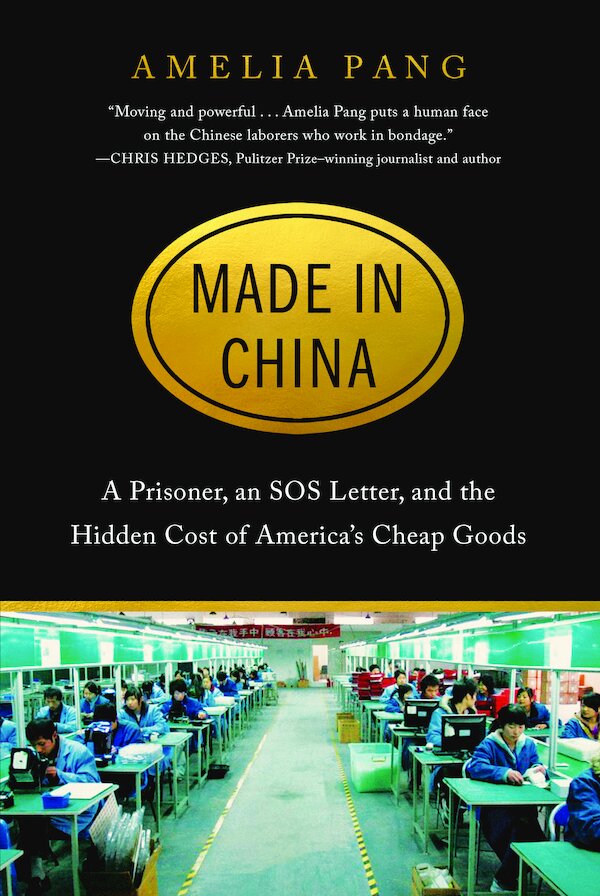 “Our spending habits put brands on a perpetual search for ways to shorten the time between design, manufacturing and distribution,” Pang writes. “Our current pressure on companies to endlessly optimize is fundamentally unsustainable.” She names online retailers like ASOS and Fashion Nova, which introduce new styles at a furious pace, as examples of this hyper-speed trend. This, in turn, increases the pressure on Chinese factories to deliver flexibly and cheaply, driving them to look for money-saving labor solutions, like those found in laogai prisons. And, although many brands regularly audit some of the factories in their supply chain, it would take a significant increase in spending to make those audits meaningful. Two factories in the Bangladesh building complex that collapsed in 2013, killing more than 1,000 workers, for example, had recently been deemed safe by auditors.

While Pang is explaining the tangle of sourcing and consumption that tie U.S. consumers to places like Masanjia, Sun Yi’s story continues to unfold. He starts contemplating writing an SOS letter to include in the packaging of some decorative Halloween gravestones he is working on. He is hiding notes in the metal bed frame where he sleeps, courting disaster as his letter-writing campaign expands to include other inmates. Meanwhile, in the United States, Pang explains, consumers are hard-pressed to hold the means of production in our heads while making a purchase. “We feel pleasure if the price is low. We feel pain if the price is too high. When we are standing … in front of the gentle glow of a computer screen, we don’t feel the agony of the workers who made our products as deeply as we feel our desires.”

Sun Yi’s sister and mother struggle to secure his release. He suffers torture and illness and, by the time Pang finishes the book, has died in exile. His story ends in Indonesia in 2017, before Pang had a chance to meet him in person. Her final chapters are an argument that his imprisonment, while years in the past, is still relevant. The camps in Xinjiang, she maintains, are a means of eliminating a culture as well as turning a profit. China’s West is an important link in China’s Belt and Road Initiative, a profusion of development and investment projects around the world. The Xinjiang government has offered incentives to textile companies willing to open factories near the camps. One recent report estimated that 80,000 ethnic Uighurs have been forcibly sent to factories in other parts of China.

Pang leaves us with a question that she herself has trouble answering. How do you square China’s economic might with its human rights record? Despite a trade war between China and the Trump administration, trade with China broke records in 2020. The European Union signed a favorable new trade agreement with the country in December. Pang concludes her book with a list of actions readers can take to help ensure companies are scrutinizing their suppliers more closely. “We need to ask our favorite brands: If you are still sourcing from Xinjiang, are you willing to pull out?” she writes.

Consumers can contact corporations. They can appeal to corporate social responsibility divisions. They can use social media platforms like Twitter. But in the face of ongoing trade deals and opaque systems of manufacturing, this comes as a tall order. If governments and corporations can’t resist a good deal in the name of human rights, can we?