Tell Us 5 Things About Your Book: An Unlikely Relationship With Guns

When the African-American journalist RJ Young first met Charles Stafford, the white Oklahoman man who would become his father-in-law for a time, Charles walked out of the room, came back and handed Young a very large revolver. “I felt certain,” Young writes, “that I had landed in either Wes Craven’s rendition of ‘Guess Who’s Coming to Dinner’ or the next film in the ‘Saw’ franchise.”

But Young quickly realized that the gesture was meant as a sign of friendship, and he set out to understand gun culture in an effort to nurture a relationship with Charles. “I had little desire to know about guns” before then, Young writes, “because I believed I knew about them already. I knew that a gun, especially in the hands of a complete stranger with a badge and a mandate to protect and serve, could get me killed.” Below, Young talks about the African-American community’s relationship to guns, the history he ended up leaving out of the book and more.

When did you first get the idea to write this book?

After the debate between Donald Trump and Hillary Clinton, when Lester Holt was the moderator. The black moderator asked a Republican nominee for president what he had to say to black folks, and the nominee essentially said, “I say nothing.” And that set me off. I wanted to write essays that spoke to why this was wrong, for folks who wanted to have a deeper understanding of where I sit in my country.

I went into the next room that night and started pounding out some ideas. I was very hot, angry. Three of those essays became a book proposal. One essay was about getting to know my ex-wife’s father, Charles, who is a huge part of the book. My eventual editor, Deanne Urmy, read the proposal and wondered if I was willing to take that chapter and blow it up into something larger, because it was a story she hadn’t heard before and she felt it was timely enough to pursue right now. I had a deep conversation with my agent, and with myself, and after talking with Deanne, I was convinced I had a partner who would help me through this, shaping what you have in front of you. I was amazingly blessed.

What’s the most surprising thing you learned while writing it?

People will buy quasi-insurance in case they murder someone. It’s not really insurance but it is paying into a program that’s essentially to protect yourself against a civil suit if you shoot someone in self-defense and they die or are severely injured and it was deemed to be a lawful action. We’re to the point now that there are not only enough people who buy firearms but walk around with them that they want to be insured against that. 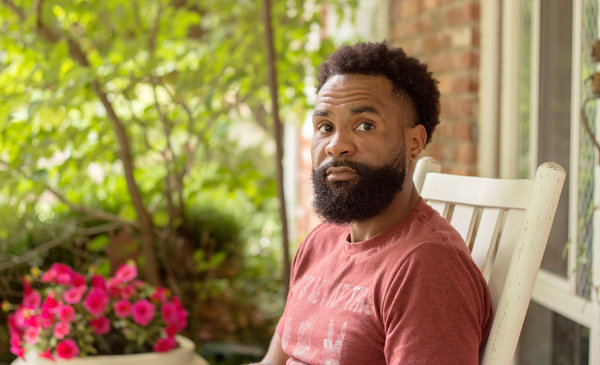 Writing the black N.R.A. chapter, in which I was seeking out other African-Americans who had picked up a firearm with the intent of safety or training or self-defense or a hobby, I came to understand that I don’t agree with them either. The idea that I need a gun to protect myself just doesn’t wash with me. My friend told me my book would always be relevant because they’re not going to stop shooting young black men. If I was a young black man — let’s say I’m 21 and have a handgun license — me having a gun isn’t exactly going to make that situation better. A police officer, if anything, is going to be more inclined to shoot me because I have a dangerous weapon, a lethal weapon, on me. I’m not inclined to make anyone think I’m dangerous. Some folks are just going to believe that I’m either a problem or a criminal. I came to think that if that’s the case, I shouldn’t be armed. I should want to talk. If I can talk to that person, if I can give them a little of myself, and if I can get something of them, that fear can dissipate. There will always be tension, but I don’t want to live in a world where I think I have to go through life defending myself with a firearm. I learned that during the course of the writing. I keep my firearms for historical precedents and reasons, but I don’t shoot them.

I left out a lot of what I came to find out about the history of guns, like how intuitive a Glock is; I chose it because I was going to get good with it the quickest. There was a pocket history of mass shootings that got cut, too. The book is a memoir. There’s maybe three chapters of straight-up journalism, and journalism is my background. The through line is how I made myself very vulnerable. I walked into my fears repeatedly because I wanted to get to know someone who thought and believed differently than I did.

Who is a creative person (not a writer) who has influenced you and your work?

T.I., the rapper. He’s also an actor and he’s a business owner. I listened to his music since I was a kid. T.I. has grown up as I have, by which I mean his music is very Atlanta, making repeated reference to drugs and firearms. He’s grown into being so socially aware and socially conscious, and has worked that into his music in a way that isn’t off-putting, in songs like “I Believe.” Or even folks like Jason Isbell, to go in an entire different direction. Their ability to tell a story that speaks to the times I live in while also giving me that hammer bass line is so important. I draw a lot of inspiration from what T.I. has done and the way he’s done it.

Persuade someone to read “Let It Bang” in 50 words or less.

This interview has been condensed and edited.