A Secret History of the Urban Age
By Annalee Newitz

I don’t know about you, but I find myself, throughout this long slog of pandemic-plus-political turmoil, alternating between feelings of warmth and camaraderie for my fellow human beings — it is so heartening to see millions pulling together in an urgent situation — and periods of wanting to punch people’s lights out. Navigating the pools of disinformation and ignorance makes one actually fear for the future of the human race. And the crises are focusing particular attention on our cities. Idea factories as they are, they would seem to hold the keys to that future, yet at the same time they suddenly seem shockingly vulnerable.

Though Annalee Newitz began work on “Four Lost Cities” long before the Covid-19 pandemic, it’s impossible to read it today without periodic is-this-where-we’re-headed? musings. The book functions as a travel guide to places that no longer exist. As with most any guidebook, I found myself drawn to some sites more than others. The chapters on Pompeii, the volcano-buried city in the orbit of ancient Rome, famous for its exquisitely preserved ruins, its brothels and taverns and graffiti, and on Angkor, a metropolis of medieval Cambodia, didn’t fire my imagination so much, perhaps because I already knew something of their histories.

They still have their charm and their surprises, these sections. I had no idea, for instance, that the Roman emperor Titus, after touring the smoking ruins of Pompeii, initiated a massive and surprisingly modern-seeming project to relocate thousands of survivors to other parts of the empire. Or that Angkor, which reached its height around A.D. 900, had an economy based on a system of debt slavery that sounds much like what middle-class Americans endure today.

But the parts of the book devoted to two other “lost” cities, places I had never known existed, filled me with wonder. Nine thousand years ago, the people of Catalhoyuk, maybe 10,000 of them, lived in cuboid clay houses packed against one another above the Konya Plain of south-central Turkey. Their dwellings were uniform, suggesting a highly regulated society: one or two rooms, painted in white or with red ocher designs. You exited not via a front door but by climbing a ladder to the roof. Much of life was lived up there: cooking, socializing, ambling along sidewalks that ran across the top of the city.

Let me say that again in case you missed it: This was 9,000 years ago. In terms of human society, that is just an imponderable span of time. The oldest of the books of the Hebrew Bible date to roughly 3,000 years ago; the pyramids of Egypt go back about 5,000 years. These were not prehumans or near relatives. They were like us: complex, organized, alive to meaning and living at a time beyond reckoning.

Another way of using “Four Lost Cities” is as a compendium of archaeological findings on humanity’s urban origins. The author bops along with experts from Stanford, Cambridge, the University of Calgary, Middle East Technical University and other institutions, peppering them with questions we’d like to ask, and reveling in the occasionally startling answer. (“I love Nero!” a classicist studying Pompeii’s theater declares at one point.) 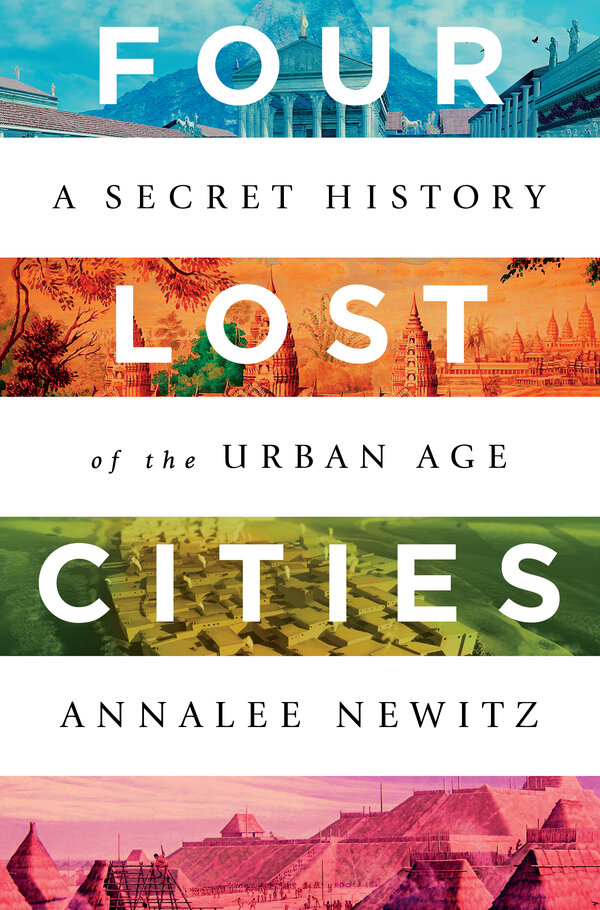 At Catalhoyuk, Newitz hangs out with Ruth Tringham of the University of California, Berkeley, who has devoted years to humanizing the remnants of this city of the dim past by focusing on one skeleton, of a woman she has dubbed Dido. Dido replastered her walls regularly, kept her home swept clean, covered the floor in reed mats and decorated the place with art: clay figures of animals and stylized human females. In other words: much like us.

Catalhoyuk was founded by pioneers of urban living. “When the earliest construction began,” Newitz writes, “many people coming to live at Catalhoyuk were only a generation or two removed from nomadism.” It was brand-new, this fixed settlement thing, but it proved remarkably successful. By the time Dido was born, the city was about 600 years old. I’m tempted to repeat a number yet again. Think of the settled, structured history Dido could look back on. As evidence of her awareness of the past, Dido, like everyone else in town, buried her ancestors in her home, beneath her bed. Some were given a special honor: Their skulls sat in niches in the walls. Dido could enjoy the comfort of her forebears’ empty eye sockets following her as she went about her daily chores. In other words: not so much like us.

A thousand years ago, meanwhile, East St. Louis, Ill., was the site of an urban sanctuary that archaeologists today call Cahokia. With a population of 30,000, it was larger than Paris was at the time. Like Paris, with its Eiffel Tower and Notre-Dame, it had distinguishing physical landmarks in the form of black earthen pyramids. It sprawled across both sides of the Mississippi River, beckoning visitors from all over the present-day Southern United States.

Cahokia seems to have been a place of spiritual pilgrimage, which drew diverse groups of Native American peoples, who spoke different languages and worshiped in various ways but came to share a reverence for this city and its ceremonial customs, which included human sacrifice. Its multiethnic, year-round population apparently serviced the religious pilgrims and, in the off-season, went about their own affairs.

Cahokia died not as a result of sudden catastrophe, like Pompeii, but seemingly because it lost its spiritual significance over time. Its people didn’t perish. The pilgrims just stopped coming; the local residents merged with other tribes. There is linguistic and other evidence that the Sioux are their descendants.

The theme of how cities die runs as a dark undercurrent through the book. Newitz devotes space to debunking the popular notion that civilizations of the past “collapse” and become “lost,” pointing instead to indications of gradual change.

Near the end, Newitz attempts to bring the study of the distant past to bear on today: “Globally, we’re in a period of political instability and authoritarian nationalism. Unfortunately, evidence from history shows that this can be a death knell for cities.” But while warning that “the combination of climate change and political instability we face in many modern cities suggests that we’re heading for a period of global urban abandonment,” Newitz notes too that “if we’ve learned anything from history, we know the death of a few cities doesn’t mean the world will collapse into dystopia.”

I suppose we’re to take some comfort from that. The operative lesson from the past, at least from this curated offering of former metropolises, seems to be that human culture is a plastic thing. Rather than lamenting the fragility of our current urban structures, we might do better figuring out how to bend and shape society for the future.

Perhaps looking back 9,000 years can yield practical guidance on how to move forward from where we are. For me, the effect of reading “Four Lost Cities” was more meditative. This is a long, long, long ride we are on. Much is beyond our control. Humanity trundles on.