Remember the ‘10,000 Hours’ Rule for Success? Forget About It

RANGE
Why Generalists Triumph in a Specialized World
By David Epstein

Are you a generalist or a specialist? Do you strive for breadth or depth in your career, in your life? After all, you can’t have both. Your time on earth is finite, as are your energy and attention. If you concentrate on doing one thing, you might have a chance of doing it really well. If you seek to do many things, you’ll taste a wider variety of human goods, but you may end up a well-rounded mediocrity — a dilettante.

Folk wisdom holds the trade-off between breadth and depth to be a cruel one: “jack-of-all-trades, master of none,” and so forth. And a lot of thinking in current pop-psychology agrees. To attain genuine excellence in any area — sports, music, science, whatever — you have to specialize, and specialize early: That’s the message. If you don’t, others will have a head start on you in the 10,000 hours of “deliberate practice” supposedly necessary for breakout achievement.

But this message is perversely wrong — so David Epstein seeks to persuade us in “Range.” Becoming a champion, a virtuoso or a Nobel laureate does not require early and narrow specialization. Quite the contrary in many cases. Breadth is the ally of depth, not its enemy. In the most rewarding domains of life, generalists are better positioned than specialists to excel.

If true, this is good news. It means that excellence and well-roundedness naturally go together; that each of us — in principle, at least — can realize the “comprehensiveness and multiplicity,” the “wholeness in manifoldness” that Nietzsche celebrated as the essence of human greatness. (Nietzsche, by the way, was himself quite the generalist, achieving distinction as a philosopher, a classicist and a composer before he came to a sticky end.)

So what is the evidence for this happy thesis? Epstein serves up a feast of it, displaying his own impressively wide range of interests: art, classical music, jazz, science, technology and sports. (A former senior writer for Sports Illustrated, he is previously the author of “The Sports Gene.”) Although the book unfolds according to a formula that has become familiar — story, study, lesson; rinse and repeat — the storytelling is so dramatic, the wielding of data so deft and the lessons so strikingly framed that it’s never less than a pleasure to read. Indeed, so smooth and persuasive is Epstein’s marshaling of evidence that I almost failed to notice an ambiguity lurking at the heart of his case.

It’s there at the very opening of the book, where Epstein contrasts Tiger Woods with Roger Federer. Woods’s rise to greatness exemplifies early and fiercely single-minded specialization: golf, golf, golf, from the age of 2. Federer’s typifies the opposite: a casual interest in a succession of sports — skiing, basketball, soccer — with an eventual focus on tennis that left him starting well behind his teenage peers.

Why did the hyperspecialized “Tiger path” lead to stardom in the one case, and the meandering “Roger path” in the other? Epstein points to the nature of the two sports. Golf (he claims) is a more specific skill than tennis: It is less dynamic, with a narrower set of patterns, and hence more rewarding of repetitive practice. Specialists flourish in such “kind” learning environments, where patterns recur and feedback is quick and accurate. By contrast, generalists flourish in “wicked” learning environments, where patterns are harder to discern and feedback is delayed and/or inaccurate. 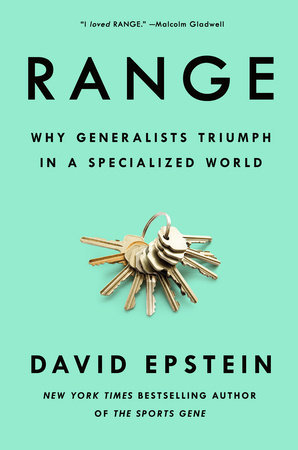 Golf, chess, classical-music performance, firefighting and anesthesiology are (in this sense) kind learning environments; tennis and jazz are less kind; emergency-room medicine, technological innovation and geopolitical forecasting are downright wicked — as is much of the rest of modern life. And it’s getting wickeder: So Epstein’s many examples from corporate culture, higher education and the space program seem to suggest. Increasingly the advantage is going to generalists who have broad integrative skills. One star innovator even descries the inflection point, telling Epstein that “specialists specifically peaked about 1985.”

Well, that’s one line of argument in favor of being a generalist. But does it really apply to Roger Federer? True, Federer played a variety of sports; but once he figured out that tennis was his thing, he became pretty monomaniacal about it. He sampled widely (like a generalist), then focused narrowly (like a specialist). A more extreme case of this pattern is Vincent van Gogh, who pinballed from one potential career to another — pastor, teacher, bookseller — before, just a few years prior to his death at the age of 37, finally discovering his true passion in art. As Epstein tells it, van Gogh was optimizing “match quality”: the degree of fit between who he was and what he did. That meant trial and error — attaining self-knowledge by living, knowing when to quit — and a consequent delayed start. (Presumably Mozart, who had a similarly abbreviated life, was just lucky that his father optimized his match quality early on by putting him in front of a harpsichord when he was just 3.)

So Epstein gives us two distinct reasons for thinking the generalist might have an edge over the specialist: (1) Generalists are better at navigating “wicked” learning environments. (2) Generalists end up with better “match quality.” What he doesn’t seem to notice is that these two reasons imply contradictory prescriptions on how to live. If life is “wicked,” you should start off broad and stay that way. If life is about “match quality,” then you should start off broad and then go narrow when you find what hits your sweet spot. What are we to do?

Happily, “Range” offers such a wealth of thought-provoking material that you’ll probably be able to work that out for yourself. Suppose science is your calling. Then, the evidence suggests, you should strive for broadness throughout your career. Students who take an interdisciplinary array of science courses are better at thinking analogically; researchers with offbeat knowledge combinations score more “hit” papers; Nobel laureates in science are more likely than their less-recognized peers — 22 times as likely! — to have artistic pursuits outside their field.

Or suppose you aspire to be an inventor. Here specialists and generalists each have their advantages. But the really enviable type is the “polymath,” who possesses deep expertise in one or more core areas but also knows the “adjacent stuff” in dozens of other technological domains. While polymath inventors are less deep than the specialists, they tend to be even broader than the generalists. Schematically, polymaths resemble a T (broad + deep) or even a π (broad + double-deep). They’re like the “Hamilton” creator Lin-Manuel Miranda, who says, “I have a lot of apps open in my brain now.”

Which leads to a caveat. Miranda is a very talented fellow; so are most of the other “high fliers” who crop up in “Range.” What worries me is that this emphasis — what social scientists call “restriction of range” — might skew Epstein’s moral just a bit.

Let’s say, as a crude approximation, that Success = talent + practice + luck. Those who are richly endowed with talent may find it easy to excel in multiple domains, to be Renaissance men and women, to be decathletes of life. (The example of Leonardo da Vinci comes to mind.) The rest of us, however, must lean heavily on the practice part of the equation. If success is what we’re aiming at, then perhaps we should seek out the “kindest” learning environment open to us and give it our all. If, on the other hand, we want to live well by sampling a smorgasbord of human goods — learning a bit of quantum mechanics, running a marathon, playing viola in an amateur string quartet, fighting for local justice — then we might be doomed to fall short of transcendent achievement.

But we can still be snobbish about it. Just declare: “I am a polymath. You are a generalist. He is a dilettante.”

Jim Holt’s latest book is “When Einstein Walked With Gödel.”