SINGULAR SENSATION
The Triumph of Broadway
By Michael Riedel

In 2015, the theater columnist Michael Riedel published his first book of Broadway history: the delicious “Razzle Dazzle,” which traced New York’s uptown theatrical fortunes from the 1960s to the ’80s. In Riedel’s flashbulb portrait, the Great White Way saw tough times — decades of neighborhood squalor, rampant corruption, the musical “Starmites” — but honor and profits eventually won the day. Riedel’s cleverest stroke lay in casting the two capos of the Shubert theater empire, Bernie Jacobs and Gerald Schoenfeld, as his protagonists. They wheel! They deal! They take a risk on “A Chorus Line”! When Jacobs dies at the end of the book, it’s a testament to Riedel’s skill: One lawyer falling sounds like thunder. 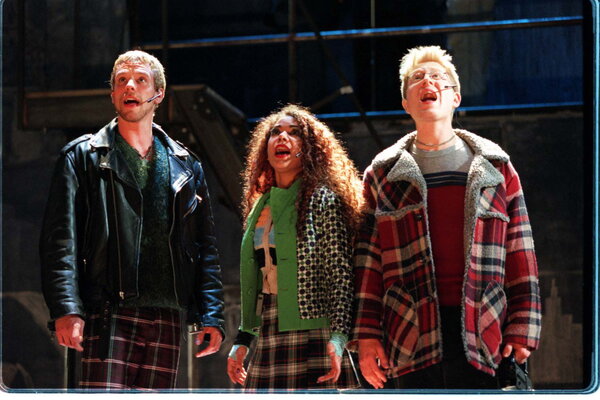 Their loss is felt all through Riedel’s sequel, “Singular Sensation.” Structurally, he’s comfortable: Again Riedel centers his chapters on shows, painting his pointillist picture of Broadway, this time in the booming 1990s. His gimlet eye for masterstrokes of marketing and producing is still there, enriching our understanding of the business, as is his ear for the sharp retort and the clash of egos. He mainly focuses on the banner successes, though, so once he’s finished with his account of Andrew Lloyd Webber’s fade from Broadway glory, the chapters evince a certain sameness. “Rent” pays out. “The Lion King” roars. “Chicago” sizzles. “Titanic” sinks its competition. (More than once, these tales include a scene of him turning to someone and saying something prescient like, “I think you have the biggest hit on your hands since ‘The Phantom of the Opera.’” He has a great track record, if he does say so himself.)

His bibliography for that earlier book lists 67 sources; “Singular Sensation,” only 42. Now, instead of needing to dive deep into research and archive, he can draw on his own long coverage of the industry, which includes five years at The Daily News and an impressive 22 years at The New York Post. Unfortunately, compared with his fascinated clarity about the flawed Schoenfeld and Jacobs, there’s little insight into the juggernaut personalities of Broadway’s latter days, even though — since they’re alive — he has more access. (It’s possible he’s actually protecting that access, since we rarely hear anything negative about the current crop of power brokers.) “Singular Sensation,” while undoubtedly valuable, thus has less swagger and muscle than his prior history — the ’90s didn’t conveniently follow a clear-cut story of bust and boom, but also Riedel’s vision sharpens as he looks farther away from his own experiences.

Still, at its best, “Singular Sensation” feels like a gossipy conversation, after a show, at a restaurant in the theater district. Reading it, you’ll hear the clink of glassware in the background; Riedel’s top note is “dish” — even when dry, his footnotes have a nudge-and-whisper quality, something he’s just letting you know now that someone more sensitive has left the table. (Meet me at the bottom of the page for the real scoop on Broadway’s marketing plans with Continental Airlines, he murmurs.) His poignant introduction, written while on furlough from The Post, will itself be a document for future historians, as the unflagging theater yenta finds his perpetuum mobile stilled. And his enthusiasm for all aspects of show business is catching: His sources are producers, yes, but also designers and press agents and lawyers, the folks who don’t appear on the marquees. Had you never thought about the poster design for “Chicago”? Why not? Someone put passion into it, and that passion draws Riedel like honey. It’s not a sentimental book, not at all. But it reads like a love letter all the same.