Herman Tarnower, the murdered diet-book writer, tried to class up his offices in Scarsdale by strewing them with British publications. It didn’t seem to have worked.

It remains, however, a nearly infallible way to choose a psychiatrist in Manhattan: If there aren’t copies of the LRB (London Review of Books), the TLS (Times Literary Supplement) or the NYRB (New York Review of Books), or ideally all three, on the waiting room table, you back slowly out the door. Their display signals seriousness of intent.

In such waiting rooms, I’ve always picked up The London Review of Books first because I knew I had a friend there. Her name was Jenny Diski.

Amid the book reviews in the LRB by critics determined to sound sober and certain, as if they were museum docents, her reviews and essays admitted doubt. They were marvelously shrewd but approachable and witty. Diski’s articles made the sound of someone chewing her fingernails very intelligently. She made stuffy waiting rooms a little brighter.

One of Diski’s great subjects was her own indolence. A previous collection of her work, published in England, was titled “A View From the Bed.” In this new book, she writes: “I am a connoisseur of sleep.” And: “A phone call initiating activity is never so welcome as the one canceling it.”

Yet Diski was prolific. She published more than 10 books of fiction and nearly as many of nonfiction, including the flexible and funny travel books “Skating to Antarctica: A Journey to the End of the World” (1998) and “Stranger on a Train: Daydreaming and Smoking Around America With Interruptions” (2002).

It was the smoking that did her in. Diski lived long enough to write a memoir, “In Gratitude” (2016), about life with her lung cancer. One essay from that book is reprinted in this new one.

“Why Didn’t You Just Do What You Were Told?” also includes essays, couched as book reviews, on such creeps, malcontents and strivers as Jeffrey Dahmer, Howard Hughes, Dennis Hopper, Keith Richards, Piers Morgan and Richard Branson.

Diski has some interesting if limited sympathy for Dahmer who, in his own mind, was creating rather than destroying. She finds Richards’s critically adored memoir a rambling slog. She tosses and gores Morgan. 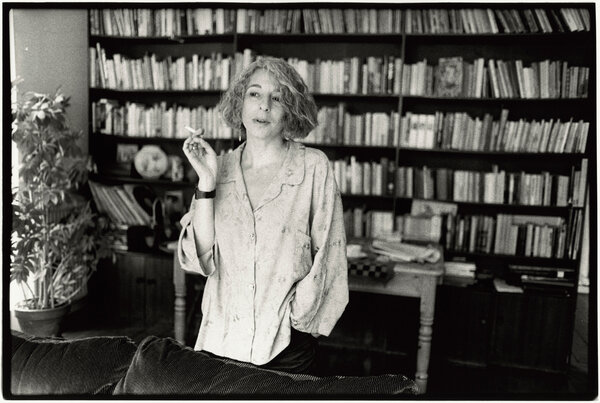 The Branson essay is a prime Diski performance. She recalls how the rich (Paul Getty, Jacqueline Kennedy Onassis) used to run silent; they got on with their lives. No longer. She could have been speaking of a royal couple in modern exile when she wrote:

“They are, it turns out, latter-day saints, deflecting and taking on themselves the slights and assaults of the elitist, convention-bound enemy, becoming martyrs and shields of the people. And my God how they whine, how they snivel, how they demand our attention and sympathy.”

Another prime performance is an essay called “A Feeling for Ice,” in which she manages to blend, if not seamlessly then convincingly and movingly, a cruise to Antarctica and an assessment of Ernest Shackleton with memories of her troubled childhood (“I came from a family of suicidal hysterics”), her time in a psychiatric hospital and a disquisition on the nature of disappointment.

Several of these pieces deal with the dedicated wives of famous intellectuals: Vera Nabokov, Martha Freud, Sonia Orwell. She considers their obstinacies, their sacrifices.

She also can’t help but admit, writing about Vera Nabokov, that she is “the devoted wife that all writers, regardless of gender, long for and for whom the most passionate believer in the right of individuals to pursue their own destiny might well give up his or her principles.”

Diski rereads Anne Frank’s diaries, in their censored and uncensored versions. We’re supposed to approach Frank for the tragedy, but Diski finds a pleasantly irritable, wide-awake soulmate. “Niceness was not her project,” she writes of the diaries.

Considering a cookbook titled “Last Dinner on the Titanic,” she wonders about further meals in dismal moral taste. When will we get directions for “staging a Hiroshima sashimi evening” or “a Dresden barbecue”?

Diski confronts her fear of spiders. After hypnotism, her arachnophobia is cured. Yet she feels a sense of loss. “Some way in which I knew myself has vanished.”

She adds: “I wonder, why not get hypnotized out of all my anxieties and nervous habits, make everything awkward and resistant go away, so that I could become … well, nothing is the alarming image I have.”

This book lacks, alas, an index. And some of Diski’s best stuff, written for other publications, is not here. For example, she used to write supermarket criticism for The Sunday Times of London, in a column called “Off Your Trolley.” You can find those pieces in “A View From the Bed.” A supermarket critic! America needs one. And a tattoo critic. And a hotel critic. And … my list is long.

In John Edgar Wideman’s new career-spanning collection, “You Made Me Love You,” one short story begins with a joke about critics: “You don’t have to be very smart to write a review of a book of short stories. All you need to say is that some stories in the book are better than others.”

I’ll take Wideman’s bait. Some of the essays in Diski’s book are better than the others. The earlier ones, in fact, are a bit finer than the later — more intimate and free-floating. It’s as if she was beginning, after two decades of writing for the LRB, to sense the well running dry.

Yet I find myself picking up the LRB now and wondering what she would have had to say about Covid, about Boris Johnson, about woke culture, about what it means when an artist like Taylor Swift rerecords her old albums.

“So much thought about everything appears in the form of literary criticism,” Iris Murdoch wrote in a 1974 letter. In an ideal world, this would be so more often. Diski was a model.