Poets in action: How writers captured the horrors of the Great War

One hundred years ago today, Wilfred Owen, poet and soldier, had 24 hours to live. On November 4, 1918, Owen and his men were trying to cross a canal near Ors in France. As Owen was walking among his men, offering encouragement, German machine guns burst into action. Owen fell. He was one of the last to die in a war that claimed 20 million dead and 20 million injured. He was promoted to lieutenant the next day.

In the cruellest twist, Owen's mother in Shrewsbury received the telegram of his death on November 11, Armistice Day, as the bells were ringing for peace. 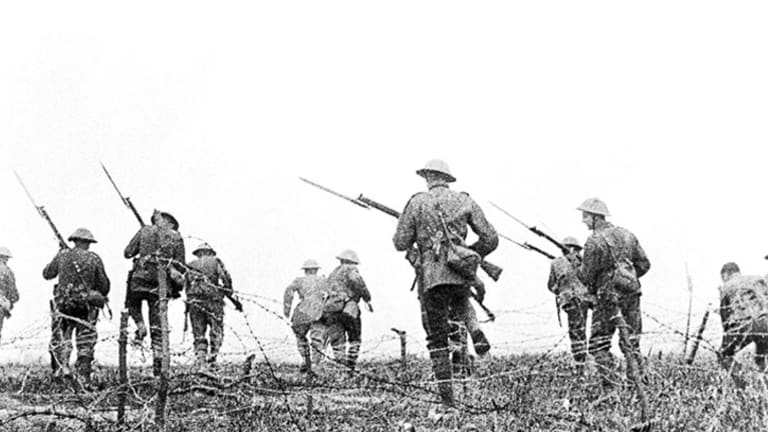 A generation of young men marched to the front in World War I, often singing and with cheerful abandon, at least in the beginning, to be slaughtered.Credit:Australia’s Silent Film Festival

Poetry would mourn the loss of a singular talent, whose star was just beginning to light the sky. Owen had seen but a handful of his poems in print before his death, aged 25. He had written all we have, in little more than 12 months, from August 1917.

The first collection, edited by Siegfried Sassoon, was published in 1920, and then in 1931 appeared an expanded collection. In the latter edition, editor Edmund Blunden wrote that Owen "was a poet without classifications of war and peace. Had he lived, his humanity would have continued to encounter great and moving themes, the painful sometimes, sometimes the beautiful, and his art would have matched his vision." 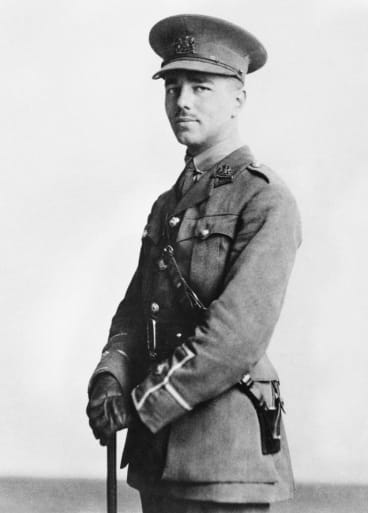 Wilfred Owen had seen but a handful of his poems in print before his death, aged 25.

Apart from what are regarded as classics such as Anthem for Doomed Youth and Dulce Et Decorum Est, it is Owen's preface to the collection that is as famous as the poems: "Above all I am not concerned with Poetry/ My subject is War, and the pity of War/ The Poetry is in the pity/ Yet these elegies are to this generation in no sense consolatory/ They may be to the next/ All a poet can do today is warn/ That is why the true Poets must be truthful."

The First World War was a charnel house. A generation of young men marched to the front, often singing and with cheerful abandon, at least in the beginning, to be slaughtered. Poetry, unlike any time before or since, was the vehicle for their voices and those of bystanders. At first, it was celebratory, but as the days of carnage rolled on and on, truth came to be heard.

There had been many wars before, of course, but none where the poet was the soldier and, therefore, the intimate witness. This war was the rendering of wounds, both flesh and spiritual, by words.

Robert Giddings, in The War Poets, writes that "before 1914, when poets dealt with war it was to render it exotically or historically removed from immediate experience. War, in the hands of Macaulay, Tennyson, Arnold, Newboult and Aytoun, had all the conviction of modern television costume drama. There were two outstanding exceptions – Rudyard Kipling and Thomas Hardy." 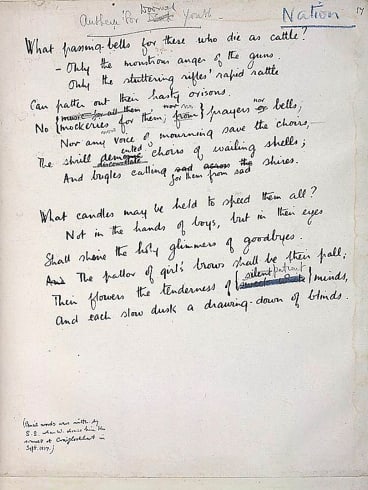 Anthem for Doomed Youth by Wilfred Owen is regarded as a classic.Credit:World Archive / Alamy Stock Photo

The primacy of the poet in people's lives a century ago can be seen in the immediate bringing into action of writers to support war aims. On September 2, 1914, only five weeks after war was declared, The Times, published a letter from the Poet Laureate, Robert Bridges, in which he likened the good soldiers of empire fighting the Devil. The image of the soldier as Christ was popular in these early stages, as was the theory that war was a necessary purification of nations. The government's Propaganda Bureau enlisted writers such as Arthur Conan Doyle and G.K. Chesterton to promote Britain's war aims. It took the pre-eminent war poet Sassoon to use the figure of Christ in a heightened awareness of spirit, flesh and suffering that had nothing to do with patriotism.

Professor Tim Kendall, in Poetry of the First World War, writes that during the war "poetry became established as the barometer for the nation's values: the greater the civilisation, the greater its poetic heritage". He believes that the "close identification of war poetry with a British national character persists to the present day". 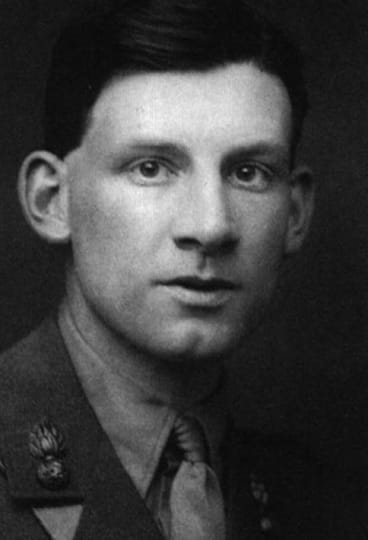 Siegfried Sassoon was among the poets who showed that there was art in death and suffering.

As to Australia's war effort in poetry, despite more than 415,000 men enlisting (from a population of fewer than 5 million) with 60,000 killed and more than 150,000 injured or taken prisoner, the results hardly trouble the margins of anthologies.

As Geoff Page noted in Shadows from Fire: Poems and Photographs of Australians in the Great War, the literary efforts of those Australians with direct experience in the war were less than memorable. His intention with the book was to juxtapose recent poems "with Australians poems actually written during the conflict".

"On closer examination, however, I found the quality of these latter poems to be depressingly low – especially when contrasted with those of the English war poets: Owen, Sassoon and Rosenberg . . . It rapidly became apparent that a much more appropriate and powerful record of the conflict could be found among the contemporary photographs held by the Australian War Memorial. These speak with a directness and truth seldom attempted, at that time, by our poets."

By the end of 1914, two anthologies of wartime verse had been published. Many poets in the early years were no more than writers of patriotic doggerel. The Georgian movement, of pastoral whimsy, and gentle beauty, had found a cause in which to celebrate England. The modernism that had slowly been growing in Europe had not permeated English literary minds, but in the aftermath of the war it blossomed, seen no more so than in T.S. Eliot's The Waste Land, published in 1922.

Dominic Hibberd and John Onions, in their book The Winter of the World, cite the work of historian Catherine Reilly in which she records 2225 British writers who experienced the war, and published poems of their experience. A quarter of the writers were women. By contrast Westminster Abbey honours 16 poets of WWI, all men: Richard Aldington, Laurence Binyon, Edmund Blunden, Rupert Brooke ("If I should die, think only this of me: That there's some corner of a foreign field that is for ever England"), Wilfred Gibson, Robert Graves, Julian Grenfell, Ivor Gurney, David Jones, Robert Nichols, Owen, Sir Herbert Read, Isaac Rosenberg, Sassoon, Charles Sorley and Edward Thomas.

Since suffering and death were universal there were no frontiers in the writing of it, geographically, with Austrian Georg Trakl, German Alfred Lichtenstein, Italian Giuseppe Ungaretti, Canadian John McCrae and Frenchmen Guillaume Apollinaire and Henri Barbusse, or in gender, Edith Sitwell, Margaret Sackville, Alice Meynell and Vera Brittain, whose Testament of Youth is regarded as a masterpiece of the period.

This was the flowering that has not been captured again. The poets of the Second World War do not go much beyond Keith Douglas and Paul Celan.

It seems curious and strange now, but the biggest barricade to the acceptance of the war poets in the immediate years after came from the towering figure of Nobel Laureate W.B. Yeats.

The Oxford Book of Modern Verse 1892-1935, published in 1936, was edited by Yeats. It contained nothing from the war. Yeats defended his decision thus: "In poems that had for a time considerable fame, written in the first person, they made suffering their own. I have rejected these poems . . . passive suffering is not a theme for poetry. In all the great tragedies, tragedy is a joy to the man who dies, in Greece the tragic chorus danced. If war is necessary, or necessary in our time and place, it is best to forget its suffering, as we do the discomforts of fever, remembering our comfort at midnight when our temperature fell."

Yeats was wrong, comprehensively so. But the glory was that Owen, Sassoon, Thomas, Rosenberg et al showed that there was art in death and suffering. The war poets found in the desolation of France and in the ruined bodies and spirits in hospital wards, a voice transcendent. Theirs was the fundamental expression of what it meant – still means – to be human. And there was a warning, but as history turned, no one was listening.

"Out there, we've walked quite friendly up to death;/ Sat down and eaten with him, cool and bland,/ Pardoned his spilling mess tins in our hand./ We've sniffed the green thick odour of his breath,/ Our eyes wept, but our courage didn't writhe./ He's spat at us with bullets and he's coughed/ Shrapnel. We chorused when he sang aloft;/ We whistled while he shaved us with his scythe." (The Next War, Wilfred Owen)

Siegfried Sassoon wrote in his diary of November 11: "The war is ended. It is impossible to realise. I got to London about 6.30 and found masses of people in streets and congested Tubes, all waving flags and making fools of themselves – an outburst of mob patriotism. It was a wretched wet night, and very mild. It is a loathsome ending to the loathsome tragedy of the last four years."