Energy saving in the 50s – gossip outside! Novelist’s memoir details growing up as a child of the East End in post-war London

A CHILD OF THE EAST END

For novelist Jean Fullerton, London’s East End ‘is a place in the heart, not on the map’. Born in 1954 and initially raised in a one-up one-down cottage just south of the famous Commercial Road, one of her first memories is of ‘lying in bed, listening to the low boom of the barges as they nudged each other on the Thames’.

It is a sound that floated into the ears of the Fullerton family for almost two centuries and Fullerton fictionalised many of her relatives’ stories in her popular series of East End Ration Book novels.

But in her memoir, she reflects more frankly on her childhood in the Fifties and Sixties, capturing a period of change that saw the damp, earthen-floored Victorian houses swept away to make room for high-rise blocks with indoor toilets and modern kitchens. 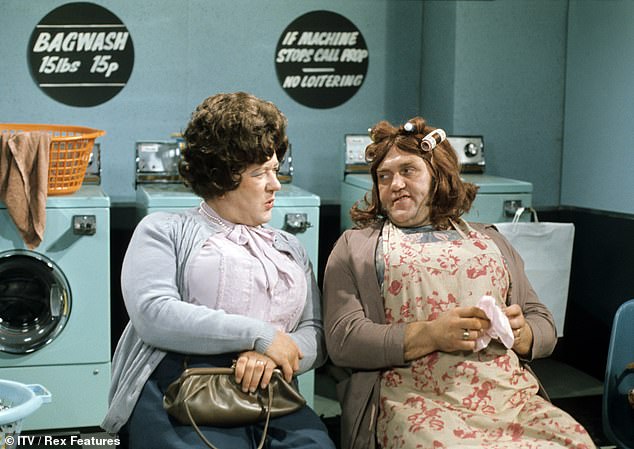 For novelist Jean Fullerton, London’s East End ‘is a place in the heart, not on the map’. Pictured: Sez Les with Les Dawson as Ada and Roy Barraclough as Cissi

Her memories will resonate like Bow Bells with fellow East Enders of her vintage. She describes a rowdy and close-knit community in which ‘the men came home on a Friday night and put the housekeeping money on the table’, while the women took their knitting out into the street to gossip and save on electricity while children chalked hopscotch grids on the pavement. Fullerton’s dad worked on the assembly line at the Ford Motor Company in Dagenham, before a gift for art landed him a surprise office job in the company’s technical drawing department.

At home her mum took in piecework, hunched over a Singer sewing machine that sounded like a pneumatic drill. This was a world in which crime was rife. Children learned to pilfer pens or reels of cotton from school. ‘You always knew someone who could get you what you were after, be it a television or a fur coat.’

Fullerton doesn’t romanticise the old days. She gives a grim account of the hepatitis outbreak caused by poor hygiene at her school and the domestic violence that was deemed permissible by the standards of the time, noting it ‘was commonplace to see women sporting black eyes and bruised faces’. Her Aunt Millie lost a baby after being beaten up by her husband.

But she breathes bustling life back into old haunts like Woolworths (where she had a Saturday job) and the ABC cinema.

Days out found the family venturing further into London. At Tower Hamlets they watched street escapologists wriggling out of chains; at London Zoo (where the chimpanzees were still dressed up for ‘tea parties’) they paid for camel rides. 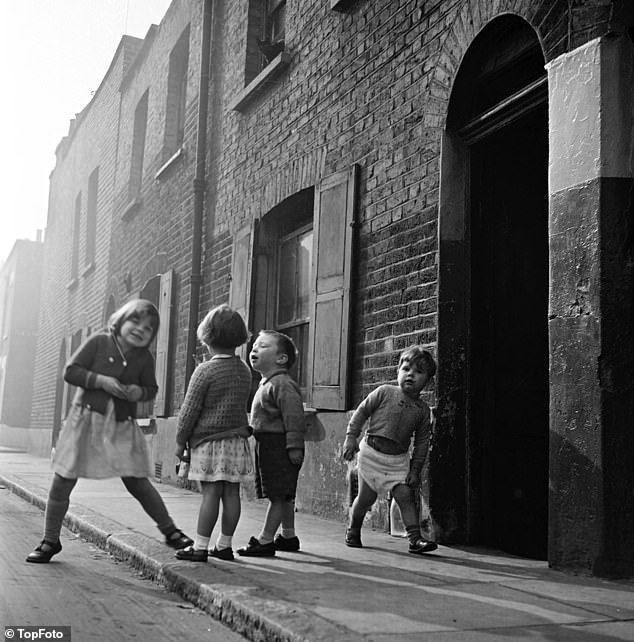 Whitechapel and Shadwell area pictured in the late 50s. In her memoir, Fullerton reflects more frankly on her childhood in the Fifties and Sixties

Fullerton’s fondest memories are of Battersea Park. She loved the funfair (closed in 1974) with its deafening steam organ, helter-skelter, and brightly painted booths selling candyfloss.

She has long since left the East End. But she remains proud of her heritage and the Cockney accent her old teachers disdained.

‘What does it mean to be an East Ender?’ she asks. ‘It means a no-nonsense attitude and an understanding that you have to make your own opportunities because nobody is going to hand them to you on a plate.

‘It’s knowing you come from a long line of survivors who have overcome poverty, scorn and oppression to make a better life.’