Nick Tosches, who started out in the late 1960s as a brash music writer with a taste for the fringes of rock and country, then bent his eclectic style to biographies of figures like Dean Martin and Sonny Liston and to hard-to-classify novels, died on Sunday at his home in Manhattan. He was 69.

The exact cause has not been determined, but he had been ill, a friend, James Marshall, said.

Mr. Tosches (TOSH-ez) and his fellow music writers Richard Meltzer and Lester Bangs were labeled “the Noise Boys” for their wild, energetic prose, a world away from fan magazines like Tiger Beat and Seventeen. Interviewing Debbie Harry of the band Blondie in 1979 for Creem magazine, he thought nothing of asking whether she shaved or waxed her legs. Neither, it turned out; she told him she plucked them, one hair at a time.

“We speak for many minutes of legs and their lore,” he wrote. “Each of us learns a great deal from the other. A mutual respect is born.”

In 1977 Mr. Tosches published his first book, “Country,” a well-researched look at some of country music’s lesser-known and often roguish figures. “Unsung Heroes of Rock ’n’ Roll” followed in 1984, with chapters on Ella Mae Morse, Skeets McDonald and many more.

But by then Mr. Tosches had already begun to branch out. His first biography, “Hellfire: The Jerry Lee Lewis Story,” came out in 1982, and in 1986 he ventured beyond music with “Power on Earth: Michele Sindona’s Explosive Story,” about an Italian financier who was involved in assorted scandals.

One of his most attention-getting biographies followed in 1992. It was “Dino: Living High in the Dirty Business of Dreams,” about Dean Martin.

“Recordings, movies, radio, television: He would cast his presence over them all, a mob-culture Renaissance man,” he wrote of Martin. “And he would come to know, as few ever would, how dirty the business of dreams could be.”

For Mr. Tosches, Martin was a celebrity who beat the unrelenting fame machine, the one that often ground stars up and consigned them to early deaths. (Martin himself died in 1995 at 78.)

“I would describe Dean as a noble character in an ignoble racket in an ignoble age,” Mr. Tosches told The New York Times in 1992.

“The things I wanted to be when I was a kid were an archaeologist, because of dinosaur bones; a garbage man, because they got to ride on the side of the trucks; and a writer,” he told The Times. “If I had become a garbage man, I could have retired by now.”

Mr. Tosches’ father owned a bar, and working there as a boy, as he often said later, provided him with the type of street-smart education that mattered. College was never a consideration; instead he held what he described to The Boston Globe in 2000 as “a bunch of strange jobs, both legitimate and illegitimate.”

He liked to tell of the few weeks he spent as a snake hunter for the Miami Serpentarium, which collected venom for research, even though he was afraid of snakes.

At 19 he was living in New York and, as he often related, working for an underwear company on Madison Avenue.

“I was doing back then, in the days before computers, what they called paste-ups and mechanicals,” he told Vanity Fair in 2011. “You have a glue pot, a T-square, a razor blade, and you physically put together advertisements.”

Ed Sanders, who was a member of the underground rock band the Fugs and operated the Peace Eye Bookstore in the East Village in Manhattan, a counterculture hangout, befriended Mr. Tosches and gave him encouraging words about some poetry he had written, nudging along his budding interest in becoming a writer. In 1969 he sold his first article, to Fusion, a Boston magazine.

Through the 1970s and into the ’80s he wrote for that magazine as well as for Rolling Stone, Creem and other publications, practicing a free-ranging brand of journalism that fell under the label “gonzo.” Although his music-related books were obsessively researched, he didn’t always take his magazine writing so seriously, especially early on, when he was known to do things like review nonexistent albums.

In 1988 Mr. Tosches published his first novel, “Cut Numbers,” about a small-time loan shark. Another, “Trinities,” about the international heroin trade, appeared in 1994.

In 1996 Mr. Tosches became a contributing editor to Vanity Fair, and an article he wrote for the magazine on the boxer Sonny Liston became the 2000 biography “The Devil and Sonny Liston.” That same year, he published “The Nick Tosches Reader,” a collection drawn from his three decades’ worth of work.

Writing in The Village Voice that year, Robert Christgau called him “a writer of barbwire hilarity and recondite formal daring whose Kantian yawp doubles back on itself three times a sentence as it blows all decent expository standards up the hemorrhoids of history.”

His most acclaimed and most audacious work of fiction, “In the Hand of Dante,” was published in 2002. The story centered on a previously unknown manuscript of Dante’s masterwork, “The Divine Comedy,” and a more or less fictional character named Nick Tosches who is called upon to authenticate it.

“‘In the Hand of Dante’ weaves together the life of Dante with the life of a character named Nick Tosches,’” Will Blythe wrote in a review in The Times. “Fortunately, it’s not quite as postmodern as it sounds. In fact, it’s kind of a mess, but a splendid, passionate mess, with a moral fervor far exceeding most novels of better grooming.”

In his review in The Edmonton Journal of Alberta, Dennis Chute delivered a considerably more backhanded compliment.

“I think Tosches is a puffed-up buffoon whose bio is a pile of horse manure,” he wrote. “Let me tell you that he also has a prose style made up of pretty phrases that mean nothing, a fixation with the word dark, and a love for obscure words he doesn’t understand how to use. So why do I think this is a must-read book? Because Tosches is one of the few writers you can experience on a visceral level. Reading Tosches is like being mugged.” 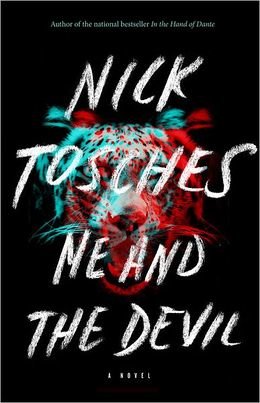 “Me and the Devil” (2012) also featured a character named Nick who bore similarities to the author, though one hopes not too many. This Nick enjoyed vampiric sex with young women. The book was not well received. In The Denver Post, John Broening called it “a series of self-aggrandizing pornographic daydreams intended to prop up the sagging legend of its author as an icon of below-14th Street duende.”

If his writing fell somewhat out of fashion, in late midlife Mr. Tosches cut a distinctive figure in that below-14th Street world, his natty dress inevitably commented upon by interviewers. One focused on his leopard-skin loafers, another on his silk homburg.

“I always felt that that was one of the rewards of being 50,” he said. “You could wear a homburg.”

An early marriage, in 1972, was brief. Complete information on survivors was not immediately available.

In 2006 the British publication Observer Music Monthly named the 50 greatest music books ever written. Mr. Tosches’ Jerry Lee Lewis biography, “Hellfire,” was No. 1. He sat for a question-and-answer session in conjunction with the honor.

“At the end of the book, you leave him very much alive, still roaming the earth, but pretty much facing the abyss,” the interviewer said of “Hellfire.”

Neil Genzlinger is a writer for the Obituaries Desk. Previously he was a television, film and theater critic. @genznyt • Facebook