The “mouth full of blood” in the title of this collection belongs to a slave punished by wearing a bit or scold’s bridle. Readers of Toni Morrison’s celebrated 1987 novel, Beloved, will remember the metal instrument that damages the mouth and humiliates the spirit: speech as free, unhindered flow becomes impossible. 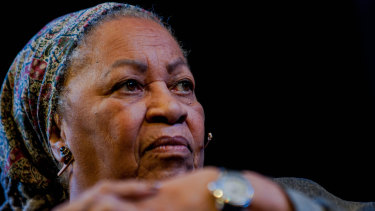 Toni Morrison’s collected essays and speeches are published in Mouth Full of Blood.Credit:Alamy

Morrison, who claims what to write, her topic, as the history, thoughts, emotions of African Americans, especially women, has always been preoccupied by the question of how to write given the legacy of slavery. How do you write what’s too hard to remember, what many wish to forget?

This compilation offers the Nobel Prize winner’s meditations on writing in speeches and lectures given over a period of nearly 40 years, with a few previously published essays added in. What a generous engagement with her public this has been, especially when, since 1970 and The Bluest Eye, there have been 11 published novels, the most recent, God Help the Child, appearing in 2015. And it’s timely — Morrison turned 88 a couple of months ago.

To read the novels is to inhabit African American experience. White Australian readers such as this one get to know the characters by following Morrison’s literary trail that is lucid but never simple. The Mouth Full of Blood essays, by contrast, ask the reader to inhabit the mind of a “black woman writer exclusively interested in facets of African American culture,” and whose aim is “to discover what the black topic did and could do to language practices’’.

Because Morrison is primarily a critic of American culture and literature, the result is a destabilisation of white American literature and literary traditions. It’s worth saying that as a critic Morrison is a precision thinker. There are several incisive essays on artists and writers, some but not all African American.

At some 350 pages, the book is best read by dipping in and out of it. The essays or speeches are presented as given, without extra commentary. Minimal context is provided in the introductory essay, itself a speech, and in a list of sources at the end that provides dates, places and publication details where relevant. The collection is free-wheeling in theme and approach but, as might be expected given its origins, there is a small amount of repetition.

The essays are grouped in three sections each of about 100 pages long: Part I: “The Foreigner’s Home” and Part II: “God’s Language” with an interlude section between, “Black Matter(s)”, which acts both as structural support and break between the other two sections. Morrison is a post-modernist thinker and we are not on a linear journey.

The ideal reader of the collection is someone already interested in Morrison and her literary project. “Art is fierce,” she says. To this end, she rejects literary theory that displaces the author. She insists that a text “is not always a quiet patient the reader brings to life” because some writers “design their fiction to disturb, rattle, and engage the entire environment of the reading experience’’.

In her fiction Morrison represents the worst excesses of African American experience by means of a method that focuses on the interior life. Her interest is in the humanity of her subjects, whether a young pregnant incest victim in The Bluest Eye, female friends in Sula, or an escaped slave who kills her baby girl to prevent her being taken back to slavery in Beloved. These are “mouth full of blood” topics: unspoken or not often spoken. 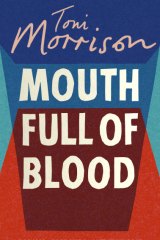 In Mouth Full of Blood, Toni Morrison gives an insight into the thought and feelings that go into her novels.Credit:

Each Morrison novel deals with a particular aspect of African American history so that, taken together, we have a loose historical sequencing. Yet in writing her “seemingly impenetrable, race-inflected, race-clotted topics,” Morrison draws less on historical sources and more on memory and image. For her, narrative structures knowledge. She does not seek to represent already-known knowledge in her fiction, but rather to gain new knowledge in the process of writing.

How does she do it? Truth may be random but fiction, or art, is not. In trying to “part the veil that was so frequently drawn” over the interior life of slaves, for example, Morrison trusts a “recollection that moves from the image to the text” and not the other way round. She says that all her work begins from an image that troubles or disturbs her, a poetic method that seeks a story to explain or describe the inexplicable. Why did a slave kill her baby? Why did a little African American girl want blue eyes? Why is a woman’s name uttered in such a strange tone?

Emotional knowledge or truths are at the centre of this. Morrison seeks to reach and write emotional memory, to find out what something felt like, what the “nerves and skin” remember. She calls this “re-memory” — remembering of what has been forgotten, or suppressed or repressed. It’s a restorative project that emphasises memory and feeling as understood in thoughts and as apprehended by the body whether female or male. However, this method, which is the opposite of racially stratified hierarchies and systems, of logics, enables her special focus on embodied women.

Morrison requires “three kinds of information to complete, sometimes even start, a narrative. Once [she’s] settled on an idea and the story through which to examine it,” she needs “the structure, the sound, the palette.” This leads in this collection to some fascinating accounts of images, sentences and phrases in her own novels — a delight for Morrison aficionados — and to equally interesting observations of texts by other writers.

In these essays we gain an insight into the thought and feeling that inform the novels that have so profoundly changed the way we think of African American experience. Morrison observes that “racist thought . . . seems never to produce new knowledge,” but the same cannot be said of her own fiction that produces such startlingly new understandings of its subject. It’s brave and unflinching, writing that does not shirk from anything, not even a mouth full of blood.

Bronwen Levy is a writer and critic attached to the School of Communication and Arts, University of Queensland.