With his finely tuned editing ear, Benjamin Dreyer often encounters things so personally horrifying that they register as a kind of torture, the way you might feel if you were an epicure and saw someone standing over the sink, slurping mayonnaise directly from the jar.

There is “manoeuvre,” the British spelling of “maneuver,” for example, whose unpleasant extraneous vowels evoke the sound of “a cat coughing up a hairball,” Dreyer says. There is “reside,” with its unnecessary stuffiness. (“You mean ‘live’?”) There is the use of quotation marks after the term “so-called,” as in “the so-called ‘expert,’” which just looks stupid.

And there are the words Dreyer currently dislikes most, even more than he dislikes “munch” and “nosh” and other distasteful eating-adjacent terms. Sitting recently in his book-crammed office at Penguin Random House, where he is vice president, executive managing editor and copy chief for Random House — a division within the larger company — Dreyer scribbled “smelly” and “stinky” on a card and slid it speedily across the desk, as if the card itself was emitting a foul stench. “I can’t say them out loud,” he said.

His new book, “Dreyer’s English: An Utterly Correct Guide to Clarity and Style,” is the climax (so far) of his nearly three decades in the copy-editing business, and it shows his playful sense of humor as well as his deep appreciation for clear writing and good language. The book is full of no-nonsense pronouncements on matters like the Oxford comma (use it) and the word “literally” (use it at your peril). It is also idiosyncratic, because writing style is highly personal, subject to an individual’s taste and whim. 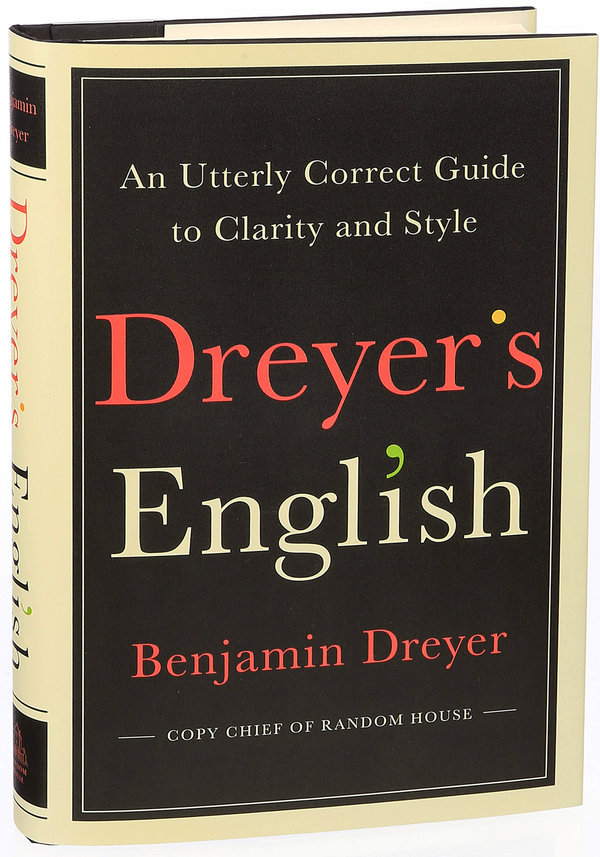 That’s why “could care less” might bug you, but does not bug him. (“I appreciate its indirect sarcasm.”) It is why, by his own admission, he is perhaps overly fond of parentheses and of the word “quite,” and also why he applauds a nice semicolon. (“The best thing to know about semicolons is that Shirley Jackson liked them,” he said, of the author of “The Haunting of Hill House.” “End of discussion.”) As he writes, “If the English language itself is notoriously irregular and irrational, why shouldn’t its practitioners be too?”

Dreyer, 60, was born in Queens and raised in Albertson, Long Island. He did not set out to be a writing guru; he set out to be an actor, but actually became a waiter. In Manhattan in the early 1990s, facing the prospect of the middle-of-the-night shift at Forty Four, the Royalton Hotel’s restaurant, he instead took a job as a freelance proofreader for St. Martin’s Press after claiming to his future boss that he owned a copy of the ninth edition of the Merriam-Webster Collegiate Dictionary, which was true, and that he was familiar with standard proofreading symbols, which was not. (Luckily, they were set out right there in the dictionary, under “P,” and he is a quick study.)

He loved the job, and the job loved him. “It’s like a treasure hunt and the treasure is bad,” he explained. “It turns out that I have a very good ear, and a nose for finding mistakes.” 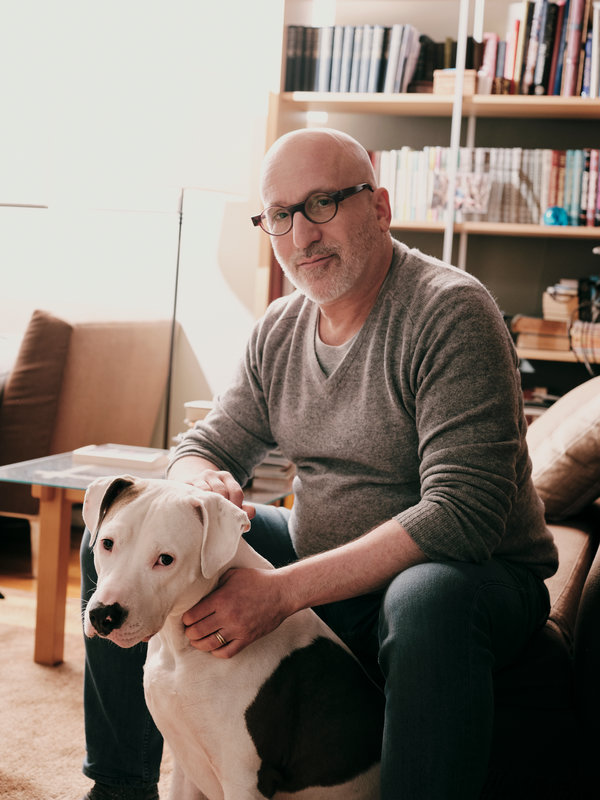 He then expanded his repertoire into copy-editing, which involves an intimate dance between editor and author, with the editor’s job being to enhance, not override, the authorial voice. The copy editor might suggest that a writer tighten up a particular passage, ditch unpleasant punctuation, switch a sentence around or — taking into account that we all sometimes unconsciously favor certain words — stop using “spatulate” all the time.

Eventually, he was hired full time. He rose through the ranks to his current position, in which he does very little active copy-editing himself but presides as the style-arbiter-of-last-resort over several hundred original titles a year. By mutual agreement, he personally copy-edits the books of just one author, the novelist Elizabeth Strout, in the manner of an accountant who now runs the company but still prepares taxes for a beloved client.

Strout calls him “Dr. B.” for his magical abilities to ferret out inconsistencies, eradicate inaccuracies and fix convoluted sentences. “Benjamin is all about the ear,” she wrote in an email. “I think the guy is astonishing, truthfully.” So do his 23,600 followers on Twitter, which he calls “the agora of the 21st century,” who know him for his snappy language-related interventions.

This is an excellent time for someone to tell us how to think about these things. Social media has spawned a generation of un-Strunk-and-White-ified people who appear to believe that punctuation is optional, that grammar is for the elderly and that ending a sentence with a period is a deliberate act of aggression.

Meanwhile, the president of the United States thinks “seperation” is a word, once referred to his own wife on Twitter as “Melanie” instead of “Melania” and has explained his personal philosophy of capitalization by declaring: “I capitalize certain words only for emphasis, not b/c they should be capitalized!” (He also uses exclamation points like a text-crazed teenager, but that is another issue.)

The president, whose name Dreyer also would prefer not to say (or to write down), comes in for some deft shade-throwing in several places in the book, as when “unprecedented” is included in a list of sometimes misspelled words. “How hard was that?” Dreyer writes, and Oval Office watchers will recognize an allusion to the president’s notorious “unpresidented” tweet.

Similarly, Dreyer takes The New Yorker, which he refers to as “a certain magazine,” to task for its infamous insistence on using a dieresis — two dots above a letter — in words with double vowels, like re-elect (“reëlect”) or pre-existing (“preëxisting”). “That certain magazine also refers to adolescents as ‘teen-agers,’ ” i.e. with the clunky inclusion of a hyphen in there, he writes. “If you’re going to have a house style, try not to have a house style visible from space.”

“Dreyer’s English” not only lays down rules but offers tips for writers who want to be clear and elegant as well as correct. Common pitfalls in fiction, Dreyer writes, include muddled timelines and geographic sloppiness; using fancy synonyms for “said”; giving similar names to too many characters — it has always annoyed him, he says, that “Downton Abbey” needlessly features two people named Thomas — and peppering your writing with show-offy allusions to “underappreciated novels, obscure foreign films, or cherished indie bands.”

“A novel is not a blog post about Your Favorite Things,” Dreyer notes.

Other tips: Cut back on “suddenly” and “began to.” Be vigilant for such phrases as “Rob commuted to his job,” with its amusingly jarring inadvertent rhyme. Don’t use “curate” “to portray what you’re doing when you organize a playlist of motivating songs for gym use.” And: “Go light on exclamation points in dialogue. No, even lighter than that. Are you down to none yet? Good.”

What does Dreyer like? He likes the word “defenestrate,” he said, with its vivid meaning of being thrown from a window. “It’s just so weirdly specific,” he said. He likes it when people omit the word “very” and spell “fuchsia” correctly. He likes discussing matters of style and usage with people who care about and appreciate those things. He once fell out with a friend he was editing when the friend insisted that, if you finish a sentence with a reference to the musical “Oklahoma!,” you should use a period after the exclamation point.

“I thought, ‘Good for him, but we’re not doing this,’” Dreyer recalled. “It’s the end of a sentence, and it needs only one piece of terminal punctuation.” (It was also, alas, the end of their friendship, though, to be fair, things between them had not been so great before, either.)

Dreyer’s book is his own, and his own editors had to defer to him in matters of taste, just as the copy editors who work for him have to allow their authors the final say. In the course of his career, Dreyer recalled, he has received all manner of authorial pushback, ranging from swear-filled insults and frank admissions of irrationality to gentle teasing.

Once he wrote in the margin of one of Strout’s manuscripts that “perhaps this is a somewhat tenuous connection,” he recalled.

To which Strout responded: “Too bad. Ha ha ha.”