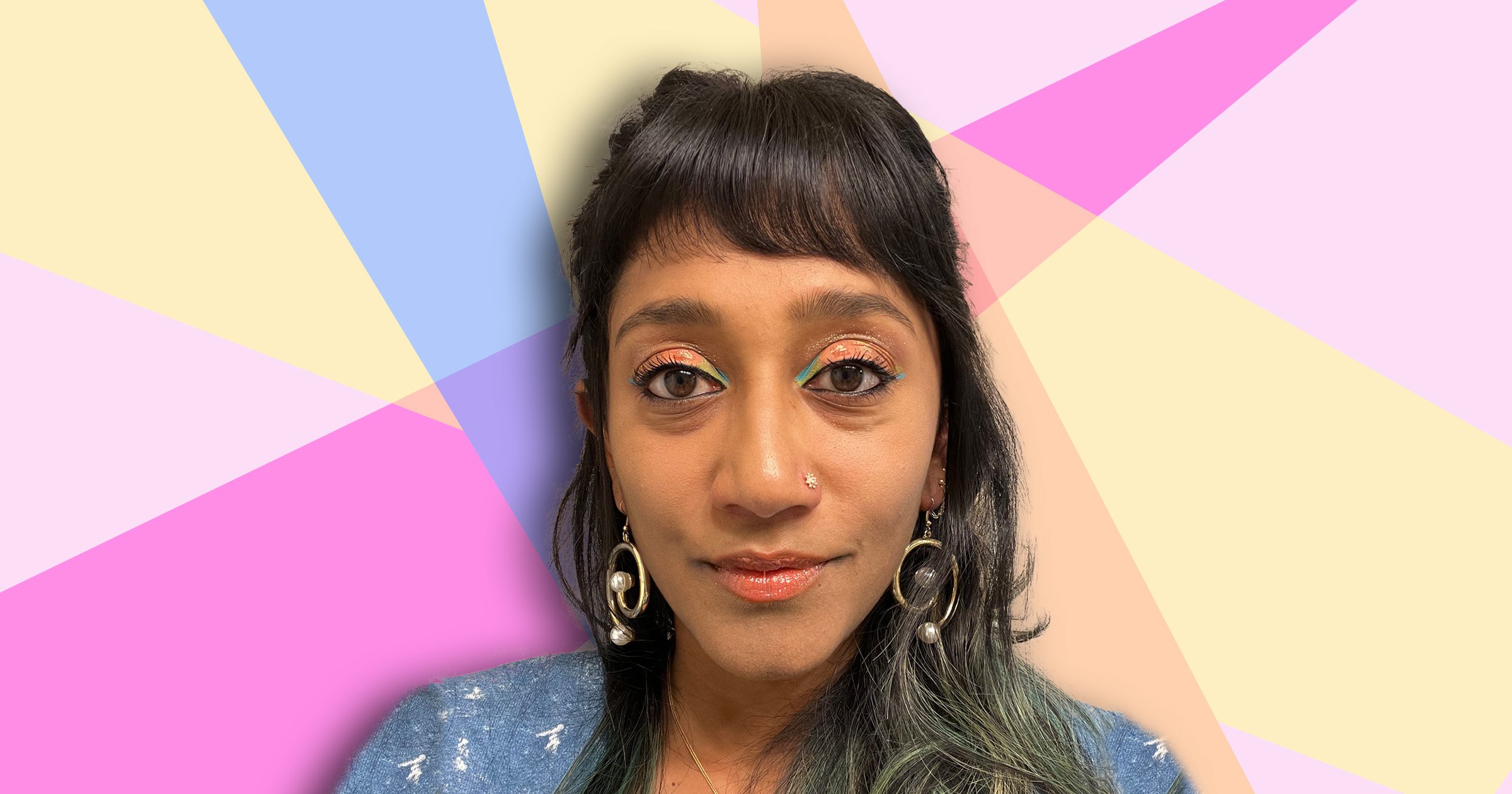 Metro.co.uk has championed the Space To Write Project – a competition designed for budding writers from Black, Asian and minority ethnic backgrounds who are writing commercial fiction that has the potential to be the next smash-hit novel.

Our four winners were announced, so now it’s time to get to know Abilasha Ramanan, author of Prophet.

Sareeta Domingo, editorial director at Trapeze, said this about her story: ‘We were all extremely impressed by this submission — the idea felt brilliantly original, but supported by a really assured execution; the sample writing laid out the concepts efficiently and engrossingly from the outset, and with characterisation that felt immediate and well thought-through.

‘This story has real commercial appeal, and we’re all keen to see how it develops.’

Here’s our exclusive interview with the new writer.

What was the process of writing Prophet like – from first having the idea to completing the project?

It’s been exhilarating and enriching in terms of the writers I’ve met, the communities I’ve become a part of, the worlds – near and far – that have become available to me as I’ve learned about tone, voice, point of view, structure, plot and the perils of adverbs, and the new lens I have to look at the world through – this feels like a superpower on good days.

It’s also frustrating and definitely lonely at points, and I can be prone to a particular type of nihilistic thinking (is there any point at all in finishing this manuscript? Is there any point in anything at all?).

Being one of the winners of The Space To Write Project has been the most unbelievable boost – certainly the kick I need to get cracking and finish this manuscript, which I often find myself day-dreaming about.

As a writer from a Black, Asian and minority ethnic background, do you feel pigeonholed to write about stories featuring characters from this community or themes prevalent in that culture?

There is a trend or perhaps a pressure to write about elements considered to be closely linked to the BME experience – immigration, belonging, suffering, identity, assimilation (or lack of) etc.

The first story I wrote was published in JaggeryLit, and centred around a traditional South Indian dance called bharatanatyam, which the British-Indian protagonist enthusiastically pursues while living in Croydon, an area with a big Indian population and promptly abandons once starting a school in Essex full of Sarah’s and Katie’s and Claire’s.

I understand the temptation, and it was easiest to grasp from my own experiences when I began writing fiction as is the case for most writers, but the reason I wanted to write in the first place is because I had the idea for Prophet, and it just wouldn’t go away.

To me, the premise of this novel is structural and looks at the systems that govern us through the lives of the characters, specifically, Alok, Mara, Zoya and Tracy.

Why do some people get to offload their emotions onto others for a fee? Who benefits from this and who suffers, and where does identity and class play a role in this? What does it mean to strip away something so fundamentally human as experiencing sadness or grief or joy?

These are the types of questions that I find interesting and want to explore.

I want to write British-Indian, Indian and white characters in a speculative fiction novel whose ethnicity is not their main literary feature, it’s incidental and plays a role in their relative experiences, while highlighting how globalised digital supply chains exploit immigrants and workers in global south countries like India.

I think writers like Octavia Butler and N.K. Jemisin have been transformative for pushing the boundaries of science and speculative fiction beyond tired colonial tropes, and most recently, I howled out loud while reading Raven Leilani’s novel Luster, where she writes with such a sharp wit about the protagonist being the ‘Great Diversity Hire’ and how her publishing house is inundated with slave girl narrative submissions. I find these approaches inspiring.

With that in mind, do you draw on personal experience when writing? Can this difference of experience be beneficial to your writing?

I think my greatest strength as a writer and where my personal experience manifests (and there is vast room for improvement, I am fairly new to fiction), is that I am extremely observant and have a strong memory for details about other people and their lives.

I’ll recognize a waiter from a restaurant from five years ago, or remember the name of a friend’s sister’s university ex-boyfriend unprompted.

Sometimes, I even feign surprise if someone shares an obscure detail they’ve already told me before, otherwise, it might come across as though I am stalking them.

In a way, this gives me more access to people and the texture of their lives, and I think that people – the relationships we have and who we love and loathe, the ideologies we adopt, the decisions we make – are endlessly interesting.

I am also sure that being a socialist, my unconventional career path and experience of living in India, the UK and the US influences my writing significantly as well.

What’s the best bit of advice you’ve had when it comes to writing?

There’s vast amounts of conflicting advice out there and it can get overwhelming. I think one of the pieces that stuck with me the most was from Arundhati Roy, author of The God Of Small Things (a book that has had such a profound impact on me, that I still have conversations with the characters in my head to this day):

‘The secret of the Great Stories is that they have no secrets. The Great Stories are the ones you have heard and want to hear again. They don’t deceive you with thrills and trick endings. They don’t surprise you with the unforeseen. They are as familiar as the house you live in. You know how they end, yet you listen as though you don’t.‘

On a more practical note, I took a fantastic six-week writing class with Catapult last year called ‘Bold Fiction’, and one of the pieces of advice they gave was on the importance of Sh*tty First Drafts, taken from Anne Lammott’s book about writing, Bird By Bird, where she argues that writers need to let go and just get anything – genuinely anything – down on the page at first because this can lead to clarity and sometimes brilliance in the second or third drafts.

It’s comforting to read that even great writers do not sit down feeling ‘wildly enthusiastic or confident’.

It often feels like pulling teeth, she writes, even for those writers whose prose ends up being the most natural and fluid. The way to get around this? Write really, really sh*tty first drafts.

Is there a particular feeling or action you want your writing to achieve?

Here, I can only aspire to draw from the Kazuo Ishiguro (Never Let Me Go, Remains of the Day, Klara and the Sun) philosophy of writing.

I listened to a talk he gave as part of his most recent book tour where he said something like, he’s willing to make sacrifices in plot or narrative to provide the reader with an emotional experience so powerful and all encompassing in relation to their fundamental humanity, it stays with them for days, weeks or even years.

I want to create that. And, I can attest to the fact that his books absolutely did that for me. I’d be pleased if I could get a few laughs in there as well.

A girl’s gotta have a good time, too, you know?

Keep reading for an exclusive extract from the winning book.

The consequence of enabling India to become the backend engine of global neurotransference technology has scarcely been felt more severely than after the tragic incident in Bangalore, Karnataka on September 10th, 2035.

A group of Prophet Technologies ‘STARS,’ on-demand emotion receivers from the division code-named Ira, appear to have perpetrated an act of unspeakable violence. New information is being revealed on an hourly basis, but we know that ten men and five women carried out an arson attack on Prophet Technologies South Indian Headquarters in the Venkatapura region of Bangalore. This follows last year’s mass suicide, culminating in twenty-two deaths, by a group of on-demand emotion receivers, who had all recently left the company’s workforce citing psychological trauma and stress-induced insomnia. A social media post written by one of the STARS prior to the large-scale fatality described how they felt like ‘machinery for the transfer of others’ misery and regarded only as vessels to be dominated by offloads, while being robbed of their humanity.”

The group in question set the HQ building on fire at 9 p.m. Thursday evening, in what reports now suggest was a premeditated attack against the technology giant. The total death count has not yet been verified but it has exceeded 18 as of reporting. A detailed investigation by The Guardian in 2033 revealed Prophet Technologies had been violating its own internal mental privacy safety standards for the transference of emotions such as ‘anger,’ ‘fear,’ and ‘sadness’ onto Indian STARs, who today account for 60% of the global workforce receiving such emotions.

Their clientele largely resides in the United States of America and the United Kingdom, however, there is growing usage from India’s high society elite as well. Critics say Prophet’s service whereby sadness, jealousy or fear can – for a fee calculated at the time of purchase – be offloaded onto gig workers who are increasingly experiencing negative neurobiological consequences – is a chronically exploitative technology that came into existence by capitalising on regulatory loopholes while making a tiny handful of people extraordinarily wealthy. These literal emotional labourers are paid the equivalent of $2 per hour on average, with some hourly rates as low as 20 cents, and often have no other options to earn a living.

Prophet Technologies’ latest and currently fastest growing feature relates to the transfer of a suite of positive emotional states (including ‘joy,’ ‘happiness’ and ‘love’), developed to serve the 10% of the world’s population with a condition called ‘Alexithymia,’ people who have difficulty experiencing emotions. It is likely no surprise to our readers that demand is far outstripping supply, with the remaining 90% of users desperate to get a slice of the action. This feature received global attention last August when the Bollywood actress Rohini Sharma, claimed that receiving joy from Prophet Technologies’ service helped her to recover from a painful and public marriage breakdown to steel magnate Mehir Mohan.