Man who helped our heroes face the world

Early in the Battle of Britain, in the summer of 1940, 21-year-old Geoffrey Page’s Hawker Hurricane was hit by stray bullets from a German bomber. The gas tank behind the plane’s engine exploded and turned the cockpit into an inferno.

‘Fear became blind terror,’ he recalled, ‘then agonised horror as the bare skin of my hands gripping the throttle and control column shrivelled up like burnt parchment under the intensity of the blast furnace temperature.

‘Screaming at the top of my voice, I threw my head back to keep it away from the searing flames.’

Instinctively, Page’s tortured right hand groped for the safety harness and it was only as his parachute descended towards the sea that he noticed: ‘The odour of my burned flesh was so loathsome that I wanted to vomit. But there was too much to attend to. 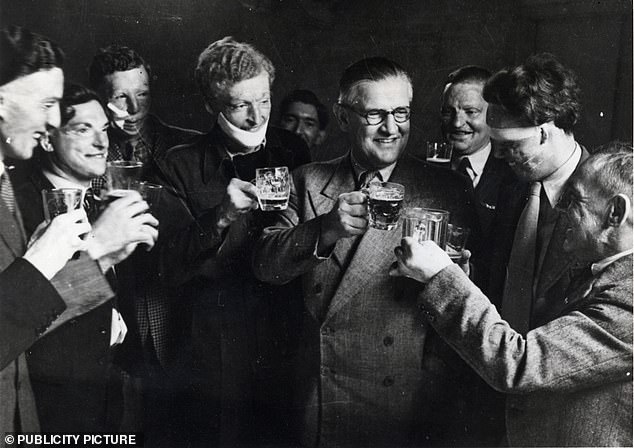 An updated edition of Emily Mayhew’s accounts of war reveal how Britain’s views of heroism have changed. She recalls disfigured casualties being kept out of the public eye before 1940. Pictured: Plastic surgeon Archibald McIndoe and his Guinea Pigs toast their treatment

‘The coastline at Margate was just discernible six to ten miles away. Ten thousand feet below me lay the deserted sea . . . I began to laugh. The force of the exploding gas tank had blown every vestige of clothing off my thighs downwards, including one shoe.’

After Page hit the water, pieces of his flesh flaked off and floated away. His blood ebbed into the brine. His pain worsened after he had been rescued by a British merchant ship and he felt ‘acute misery’ as ‘the salt dried about my face injuries and the contracting strap of the flying helmet cut into the raw surface of my chin.

‘Buckle and leather had welded into one solid mass, preventing removal of the headgear.’

On arrival at the RAF’s main hospital in Halton, Page looked away as the medics injected morphine and, in doing so, caught sight of his reflection in the mirrors of the overhanging light.

‘My last conscious memory was of seeing the hideous mass of swollen, burnt flesh that had once been a face.’

But Page was lucky. Before World War II, most serious burn victims died within days from a particularly virulent form of shock or unchecked infection. They were not even admitted to teaching hospitals for fear the hopelessness of their plight would dent the young medics’ morale.

But, by 1940, a series of clinical breakthroughs in the treatment of both burn shock and infection prevention saw a surge in the number of men surviving long enough to require the services of the four plastic surgeons then practising in the UK.

Chief among them was the extraordinary Archibald McIndoe, who treated casualties such as Page at a special hospital in East Grinstead. To be played by Richard E. Grant in a biopic scheduled for release next year, New Zealand-born McIndoe was not only a brilliant and innovative surgeon, but a hugely compassionate — and rather eccentric — character who never lost sight of the human beings within the battered bodies that he repaired.

How dangerous is being a Spitfire pilot?

McIndoe was ahead of the game in helping these men find comradeship. He told jokes and encouraged his nurses to serve beer on the wards and take the time to chat. His 649 RAF patients were equal partners in their own treatment, invited to view operations, give honest feedback and support each other as part of a ‘Guinea Pig Club’ (GPC), who continued to meet right up until 2007.

In this updated edition of her short and tender account of the GPC, Emily Mayhew reminds us that World War II changed Britain’s view of heroism.

Before 1939, we celebrated great battlefield victories. After 1939, we learned to celebrate the quiet, gruelling valour of those who pushed on with civilian life, despite the horrors they had seen and the horror they saw in the eyes of those shocked by their burned bodies.

‘Those first sorties into the world outside the hospital were painful,’ remembered Bill Simpson. ‘Without hands, for instance, it was embarrassing to have someone pouring beer down your throat, wiping your mouth, blowing your nose, handling your money. It was even more embarrassing to have to make for the gentlemen’s cloakroom in pairs.’

‘Before 1940,’ writes Mayhew, ‘the Armed Forces contained their most disfigured casualties away from the public gaze.’ 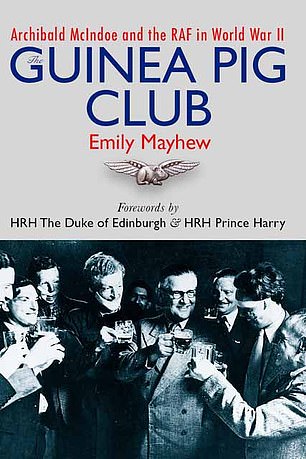 However, Archibald McIndoe changed that: he made sure that his patients were treated with warmth and dignity by the people of East Grinstead.

His Guinea Pigs were served in cafes, invited to dances and billeted in local houses.

The community was considered so therapeutic that patients were actively discouraged from going home sooner than necessary.

McIndoe fought, too, for the employment rights of his patients. Prior to the war, the convalescent period was restricted to 90 days with full pay, after which the patient had to return to active service or leave the RAF.

This rule was quickly scrapped and, eventually, officers undergoing plastic surgery remained on full pay until the end of their treatment.

McIndoe also refused to give his patients the regulation Convalescent Blue uniforms, encouraging them to dress in regular uniform in acknowledgement of the battle that they were still fighting.

Many Guinea Pigs did return to active service — Geoffrey Page among them. After two years of treatment, he headed back into combat, determined to shoot down an enemy plane for every one of his 15 major operations.

At his funeral in August 2000, Air Chief Marshal Sir Christopher Foxlee-Norris declared: ‘Even by the Battle of Britain standards, he was the bravest of the brave.’